Authored by John Haughey via The Epoch Times (emphasis ours),

A recently published analysis by a consumer advocacy nonprofit maintains that shutting a 4.5-mile section of a nearly 70-year-old pipeline that spans the Great Lakes from Wisconsin to Ontario would impose $23.7 billion in higher fuel costs on families and businesses in Indiana, Michigan, Ohio, and Pennsylvania.

Consumer Energy Alliance’s (CEA) 14-page report estimates that closing Canada-based Enbridge’s Line 5 pipeline in the Straits of Mackinac, which connect Lake Michigan to Lake Huron, would spur regional fuel price spikes of 9.47 to 11.66 percent “independent of any other market conditions, such as the surge in fuel prices observed over the past 12 months that are tied to international oil markets and logistical challenges caused by the pandemic.”

Enbridge and the state of Michigan have been engaged in litigation for more than a year over the pipeline after Michigan Gov. Gretchen Whitmer, a Democrat, in November 2020 revoked the pipeline’s original 1953 lakebed easement and ordered the pipeline to be shut by May 2021, citing the risk of a spill in the ecologically sensitive straits.

Enbridge ignored the order—the pipeline is still funneling 540,000 barrels per day (bpd) of light crude oil, light synthetic crude oil, and natural gas liquids (NGLs) through the straits—and petitioned to have the case heard in federal courts. In October 2021, the government of Canada backed Enbridge in its challenge and invoked a 1977 pipeline treaty with the United States to demand bilateral negotiations at the federal level.

In November 2021, a federal judge transferred Whitmer’s suit out of Michigan’s courts. That suit was subsequently dropped, but a similar lawsuit filed by Michigan Attorney General Dana Nessel remains in state courts, although a ruling is pending regarding its jurisdictional status.

Built in 1953 by Bechtel Corp., the Line 5 pipeline is actually two 20-inch-diameter parallel pipes with an enamel coating that’s three times thicker than a typical pipeline. Enbridge maintains that there has never been a leak in its 69-year operational existence.

The company maintains that it monitors Line 5’s Straits crossing “24/7, using both specially trained staff and sophisticated computer monitoring systems” that include “regular inspections of the line, using inline tools, expert divers, and remote operating vehicles (ROVs), going above and beyond regulatory requirements.”

In April 2020, Enbridge filed an application with the Michigan Public Service Commission (PSC) requesting authority to replace its 4.5-mile Line 5 pipeline under the Straits of Mackinac and encase it inside a tunnel.

The application didn’t address the tunnel—only the pipeline replacement. The proposed $500 million tunnel project is being reviewed under separate applications filed with state and federal agencies. The last date for public comments on the proposed tunnel was March 11. State regulators and the three-member PSC are currently reviewing the proposal.

Six months later, Whitmer pulled the plug by revoking its easement and ordering the pipeline shuttered by May 2021, effectively pushing the matter into the courts.

Although there have never been any reported leaks from the pipeline in the straits, Enbridge-owned pipelines have been responsible for oil spills elsewhere in Michigan, including from Line 5 in Crystal Falls in 1999 and in the Kalamazoo River in 2010.

According to a study published by the University of Michigan and the U.S. National Oceanic and Atmospheric Administration, a leak in Enbridge 5 near the Straits of Mackinac could affect roughly 700 miles of shoreline. A pipeline leak and oil spill could cost as much as $6 billion in cleanup efforts and environmental damage, according to the state, citing a close call in 2018 when a ship’s anchor stuck, but didn’t rupture, the pipeline in the straits.

An August 2020 study by Gary L. Street, former Dow chemical engineer, found a temporary court-ordered shutdown of one of Line 5’s dual pipelines following an incident elsewhere along its traverse didn’t affect gas prices or supply in Michigan or Canada.

But according to CEA’s analysis, shutting down the pipeline permanently would be another matter.

CEA stated that its “independent third-party analysis,” conducted by California-based Weinstein, Clower, and Associates, examined the effects that a Line 5 closure would have on the region and found “shutting down this critical infrastructure would have a devastating impact on the supply of transportation fuels in regional markets, and hurt petrochemical refiners that rely on the pipeline to safely and efficiently deliver feedstock.”

“The jump in transportation fuel prices will not be borne evenly across all consumer groups,” the CEA report reads. “But given current macro-economic trends, most of these higher costs will likely be passed on to households.”

The increase in fuel costs will radiate through local and state economies, according to CEA.

“Based on research into broader energy price inflation, these cost increases will further push up food prices, especially for beef, pork, and corn. We estimate combined grocery and restaurant prices will rise an additional 0.2 percent to 0.3 percent on top of any other inflationary pressures in the economy,” the report reads. “These energy cost increases will lower economic growth rates, especially in Michigan and Ohio, for years to come.”

“In the longer term, rising transportation fuel prices will have negative impacts on regional economic competitiveness, particularly in manufacturing and related logistics services,” the report reads. “These energy cost increases will lower economic growth rates, especially in Michigan and Ohio, for years to come.

“Households are already enduring the highest rate of inflation in 40 years with real wages and earnings declining over the past year. The closure of Line 5 would be the wrong action at the wrong time.” 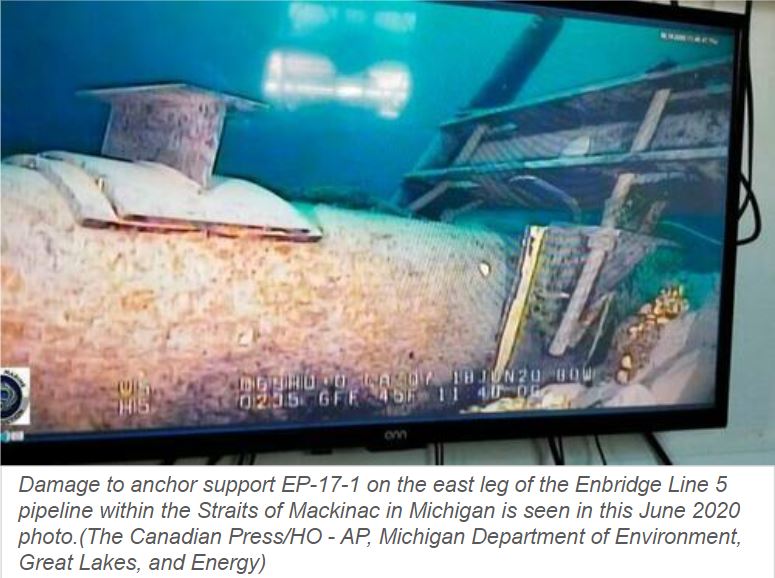