Companies have a responsibility to uphold property rights for the protection of landowners and the public.

“If you want to know if I was involved in any of that sabotage, well — if I was, would I be stupid enough to tell you?” This was the answer of the late religious fanatic-turned-eco-terrorist Wiebo Ludwig when he was questioned about pipeline bombings, explosions and vandalism in Alberta and B.C.

Ludwig, who died in 2012, committed some of the worst domestic acts of sabotage in recent memory. His illegal acts during the 1990s included: bombing a gas well, encasing a wellhead in concrete, counseling a police informant to obtain dynamite during a sting operation and other acts of vandalism and mischief. He continued to threaten acts of sabotage following his early release from prison until his death.

Journalists have merely called this criminal a “controversial” and “polarizing” figure and “an environmental activist.” A Maclean’s article archived in The Canadian Encyclopedia described him as “even a folk hero.” And, somehow, Andrew Nikiforuk’s book, Saboteurs: Wiebo Ludwig’s War Against Big Oil, won the Governor General's Award for Nonfiction.

But in this country, we have a word for persons who violate the Criminal Code of Canada and it isn’t “activist” or “demonstrator” or even “protester.”

More recently, Vanessa Gray, Sarah Scanlon and Stone Stewart faced charges of “mischief endangering lives” after trespassing and occupying an energy company’s site in 2015. These women chained themselves to pipeline infrastructure and manually tampered with equipment.

Reporters are now noting that the withdrawal of charges signals a “precedent-setting victory.” The three women have a court order to stay away from company property, but what is to stop their friends from imitating them, if not the rule of law generally?

"We need only look to Nigeria, where hundreds in recent years and thousands in recent decades have been killed in the process of tampering with pipelines."

The Canadian public frequently hears that criminal acts committed by trespassers, vandals, and saboteurs at pipeline sites have the potential to cause severe harm.

A public awareness document released by Enbridge mentions the “potential for a pipeline failure or release if a manually operated valve is closed without prior notification to our control centre.”

Unfortunately, this means practically nothing to the average citizen. Given the state-of-the-art technologies engineered and utilized every day by the energy industry in Canada, companies usually manage to shut down the lines when saboteurs threaten them. This means, thankfully, that we do not actually get a sense of the real consequences of “life-endangering” tampering.

Yet, we do know that trespassing and then tampering with pipelines puts the community-at-large, landowners, employees, shareholders, our environment and—yes—especially the saboteurs themselves, at great risk. We need only look to Nigeria, where trespassing usually happens in an attempt to scavenge the fuel, rather than squander it. Hundreds in recent years and thousands in recent decades have been killed in the process of tampering with pipelines.

Strangely, so-called environmentalists in Canada who would like to shut down Canada’s energy industry do not realize that their actions will only lead to greater energy dependency on countries like Nigeria, where those caught tampering with pipelines are occasionally punished by being shot dead.

In Canada, almost everyone understands that individuals have rights concerning their private property. It’s common sense that it is wrong to trespass or steal. However, not everyone understands that companies also have rights concerning property. Part of ensuring the rule of law in Canada involves communicating the law clearly and maintaining sharp distinctions between environmentalists and eco-terrorists.

The Canadian Security Intelligence Service Act clearly considers threats to the security of Canada to include: “espionage or sabotage that is against Canada or is detrimental to the interests of Canada … and activities within or relating to Canada directed toward or in support of the threat or use of acts of serious violence against persons or property for the purpose of achieving a political, religious or ideological objective within Canada or a foreign state.”

But mischief also has a playful sound to it, does it not? And this is the problem. Time and again, clear violations against private and corporate property are taking place. The rule of law is being substituted for the rule of stunts.

We see that the illegality of trespassing and sabotage is not always a sufficient deterrent to prevent people from committing these acts. Some think that it is a legitimate form of civil disobedience and seek the publicity that results from being prosecuted. Law-abiding citizens, companies and politicians have a responsibility to promote legal and democratic forms of opposition. The laws are adequate but must actually be enforced. Otherwise, saboteurs will revel in their stunts even as they threaten everything for which they purport to stand.

Todd Nogier, Enbridge’s manager of enterprise corporate communications, explains that keeping in touch with its neighbours is paramount to Enbridge as a company. “That’s why we contact landowners, business owners, tenants, communities and emergency responders on an ongoing basis,” he says.

“It’s an opportunity to share important information, hear about our neighbours' experiences, respond to their questions and update them on Enbridge’s safety programs. These are also opportunities for us to communicate about the risks to both people and the environment of tampering or other sabotage.”

Amanda Achtman is a CAEPLA contributor. She holds a BA in political science and is currently pursuing an MA in philosophy. 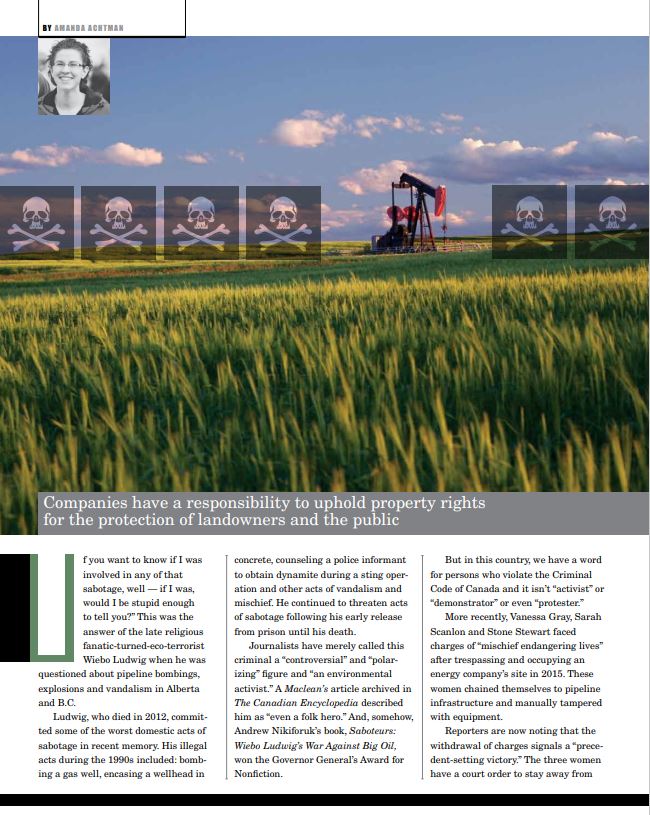 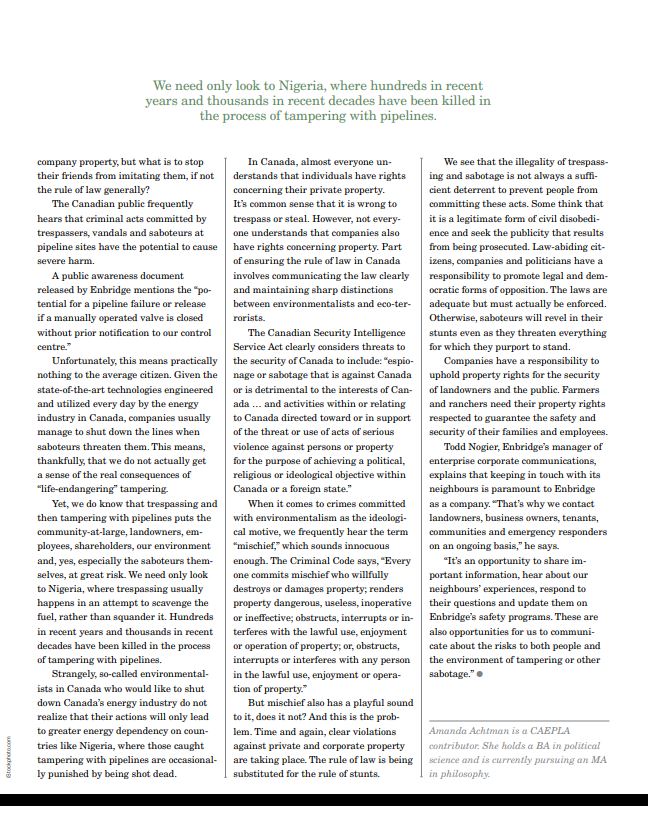