Did Indigenous North Americans understand the concept of private property?

One of Ayn Rand’s most notorious claims is that Europeans and their descendants were justified in driving Indigenous tribes off their lands because Aboriginal Americans “did not have the concept of property or property rights,” and because they “wish[ed] to continue a primitive existence.” Rand also claimed the Indian tribes had no right to the land they lived on because “they didn't have a settled society,” and “had predominantly nomadic tribal ‘cultures.’”

Rand’s use of quotation marks around “cultures” perhaps implies a judgment that Indigenous culture was not really culture at all.

Today, many critics of laissez-faire liberalism (i.e. libertarianism) continue to quote these lines in order to indict all defenders of private property, whom critics like to associate with Rand’s peculiar ideology.

As with so many accusations that conflate Rand’s beliefs with libertarians, this is misplaced. Many libertarian writers have approached the issue from a perspective that assumes the tribes were treated unjustly.

Leonard Liggio, for example, discussed the issue from this perspective in the early 1970s, and Rothbard repeatedly wrote with sympathy in Conceived in Liberty about the tribes who interacted with colonial Americans. To this day, First Nations sovereignty, as weak as it is, continues to be an important check on federal power.

Regardless of how one views European and North American policy toward the tribes, however, the argument that the tribes and individuals had no concept of property—and thus whites were justified in seizing tribal lands—is a terrible one for a variety of reasons.

First, as we shall see, the idea that Indigenous people and their tribes had no concept of property is completely alien to the actual historical facts in the matter.

Second, this argument is especially damaging and misguided because it creates the impression that the concept of private property is not apparent to all rational human beings, and is perhaps even an invention of European theorists. This argument, of course, is beloved by Marxists and other anti-capitalist ideologues who argue that the idea of private property is peculiar to capitalists who invented the concept to justify their own “exploitation” of workers.

Fortunately, this is not the case at all. The concept of property—in any situation where scarcity exists—is self-evident, and does not require complex theories spun by Europeans to become apparent.

Indigenous tribes weren’t all the same

One reason that even educated people like Rand have believed that North American Indians were virtually all “nomadic” and did not understand the concept of property, is the influence of Hollywood. In Rand's day especially, popular culture virtually always focused primarily on Plains Indians—frequently the Lakota and Cheyenne tribes—and rarely portrayed tribes with very different social structures.

In real life, Indian tribes across North America—prior to the 20th century—varied considerably in social structure, lifestyle and the usage of technology. Indeed, whenever one encounters commentary that refers to “the Indians” as a uniform group, this should be a red flag to the reader that the argument is being made by someone who knows next to nothing about the tribes.

The Pueblo Indians of New Mexico were not nomadic at all, and employed agriculture, much like the so-called "Five Civilized Tribes" (i.e., Cherokee, Chickasaw, Choctaw, Creek and Seminole). The Cherokee were known for their successful use of agriculture (which prompted whites to later steal their fertile lands under President Andrew Jackson). The Iroquois rotated their living quarters between several locations that were regarded as the best for farming and hunting.

Virtually all tribes recognized the validity of personal property. Individual tribe members were not expected to "share" their horses, weapons, dwellings and slaves among all other members of the tribe.

Indeed, many tribes, especially among the Plains Indians, developed complex economic and social rules and mores around the so-called “horse culture,” in which ownership of the highest-quality horses was a status symbol and a means of attaining power and prestige within the tribe.

Each Indian tribe was perfectly well acquainted with the limits and bounds of its landholdings.

In regards to the Comanches of the southern plains, economist Bruce Benson has observed:

“Private ownership was firmly established for such things as horses, tools for hunting and gathering, food, weapons, materials used in the construction of mobile shelters, clothing and various kinds of body ornaments that were used for religious ceremonies and other activities.

“Cooperative production (group raids to take horses from enemy tribes or group hunts) did not imply communal ownership. The product of such cooperative activities was divided among participants according to their contributed effort.

“Individuals might share such things as food at times, but they did so out of generosity. Food could be given but not taken because it was private property not communal property.”

Another reason many continue to think aboriginal Americans had no concept of private property, however, is that many tribes did regard land as being communally owned. Carl Watner explores the topic in The Journal of Libertarian Studies:

“Misunderstanding arising from their differing concepts of property in land was one of the main causes of disputes between the Europeans and the Indians. The Indians did not recognize land appropriation by individual members of the tribe, and even Roger Williams recognized that landownership among the Indians was usually held by the tribe.

“Nevertheless, among the Indians articles of personal property were owned by the individual. Each Indian tribe was perfectly well acquainted with the limits and bounds of its landholdings, even though these holdings were not enclosed in the normal European fashion.”

“As voluntary associations, the tribes could, and in fact did, sell their rights to the soil by allowing their chiefs to represent tribal interests. These chiefs were authorized to make and execute deeds on behalf of the tribe, to receive for the tribe the consideration for the deeds, and to divide such consideration among the individuals of the tribe.

“The authority of the chiefs, so acting for the whole tribe, is attested by the presence and assent of the individuals composing the tribe and by their receipt of their respective share of the price.”

Thus, some Indigenous tribes could deal with the Europeans for the sale of their lands, and in many cases the chiefs had the authority to determine what would be suitable compensation for those lands.

To conclude that Indigenous people and their tribes had no concept of private property is to narrow the definition of “property” to the point of being useless.

This issue is further complicated by an overly restrictive idea of homesteading employed by some libertarian theorists.

John Locke, of course, famously asserted that ownership of land can be obtained through three methods:

Those who claim that the Indian tribes had no right to their land often employ this reasoning to build their case. But this is too limiting in its idea of homesteading the land. Consider, for example, that a plot of land exists with a lake on it. Inside the lake are fish. A group of people then claims the lake as its own in order to catch the fish, and excludes other groups from the land. Has this group homesteaded it?

A strict view of Lockean “improvement” (i.e. mixing labour with the land) might be that this group of Indigenous people has no claim to the land because it hasn’t improved it by planting trees or putting a fence around it.

But in fact, the very act of excluding others is an act of improvement, because limiting use of the lake ensures it’s not overfished, and preserves the value of the land for use by a specific group of owners. The homesteading tribe has not left the lake in its “natural” state. Access has been controlled for the specific purpose of preserving value.

In practice, value can be added to land in any number of ways, and land is useful for many purposes other than planting crops or building a factory.

Thus, when nomadic tribes exclude others from specific hunting lands, they are preserving resources—such as fertile grazing areas for game—that give the land value. If hunting grounds are not exclusive, resulting in overhunting that drives away game, then the value of the land has been destroyed for hunting purposes. By preventing this destruction of value, the homesteaders have asserted their ownership of the land in question.

In spite of the tribes’ habitual use of personal property, and in spite of a clear understanding that ownership in land can be both asserted and traded, the idea that Indigenous people “did not have the concept of property or property rights” continues to endure in some corners of the libertarian world and among conservatives. It is an ahistorical and fact-free approach that should be abandoned as soon as possible.

Ryan McMaken is the editor of Mises Wire and The Austrian. Ryan has degrees in economics and political science from the University of Colorado, and was the economist for the Colorado Division of Housing from 2009 to 2014. He is the author of Commie Cowboys: The Bourgeoisie and the Nation-State in the Western Genre. 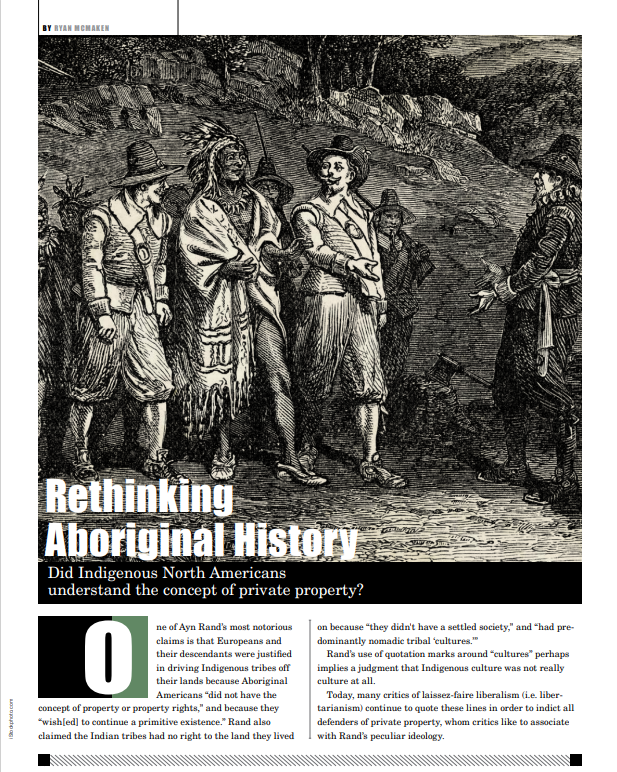 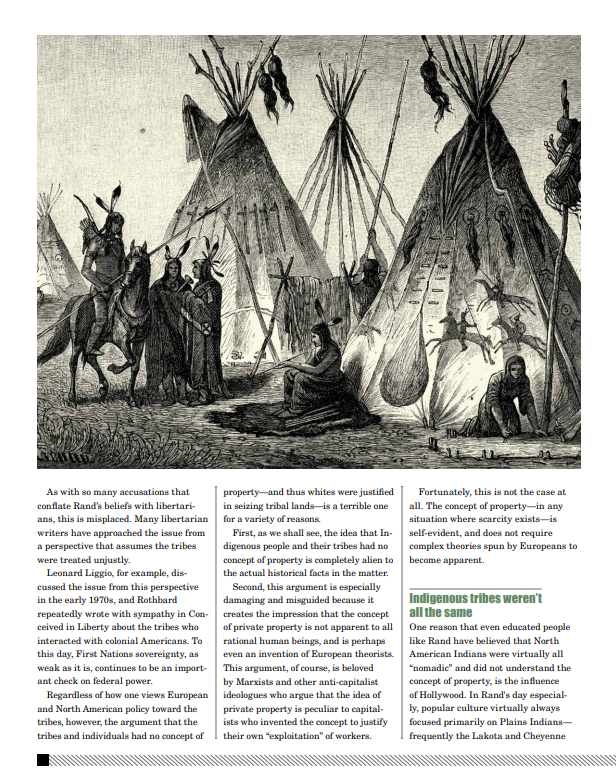 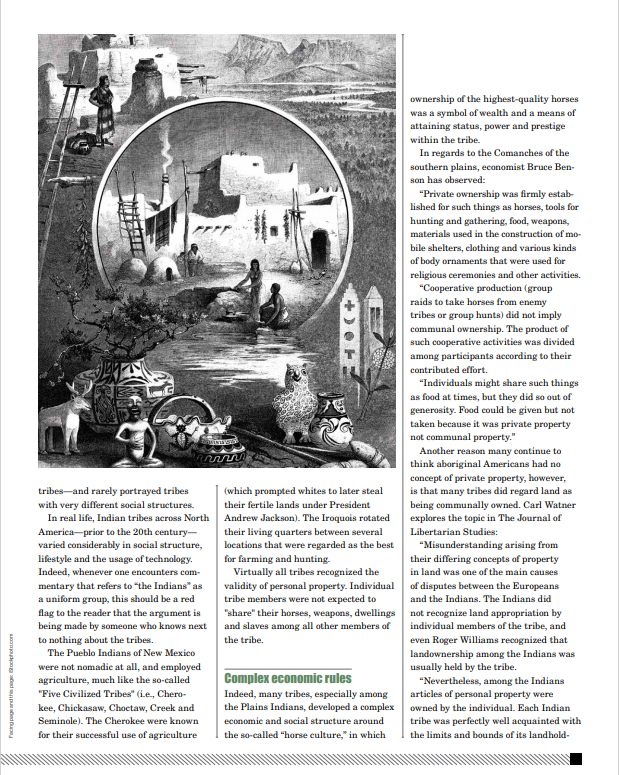 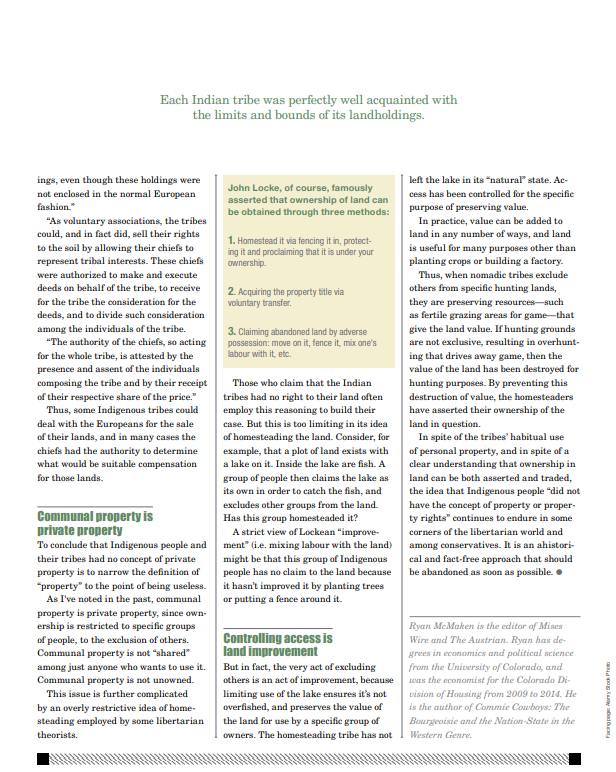