"Widespread expropriation also has an insidious effect on the economy by undermining investors’ confidence that their property will be secure."

WHAT IS THE BIGGEST economic and environmental problem that needs to be solved in Canada? For me, that’s an easy question. Our biggest problem is that we don’t have strong and secure property rights in this country.

In many cases, resource users don’t have clearly defined, exclusive, perpetual, transferable, enforceable rights. Property rights internalize the costs and benefits of resource use — they ensure that people experience the consequences of their actions. As a result, they create incentives for sustainable use. Property rights also provide tools to protect resources from outside threats. They give people the legal right to say “no” to developments that harm them, their land or their water.

Even when people do, nominally, have property rights, their rights aren’t secure — they can be expropriated.

It’s no exaggeration to say that the history of environmental law is a history of expropriation. Governments have used pollution permits and liability limits to expropriate our common-law property rights to clean air and water. This was the focus of my first book, Property Rights in the Defence of Nature.

My current focus is on the expropriation of land — the taking of land without the permission of the owner. Why should an environmentalist be concerned about this? First, environmentally destructive mega-projects often rely on expropriation. The developers of hydro-dams expropriate the land they will flood. The developers of pipelines, transmission lines, and sprawl-inducing highways likewise take land, or an easement on it. Large-scale water diversion projects — an issue many environmentalists are especially concerned about — could never go ahead without expropriation.

There’s another environmental problem that grows out of expropriation: Expropriation diminishes developers’ incentives to take care. In the 1970s, when pipeline companies had carte blanche to take the land they needed, they were notorious for riding roughshod over landowners. A lawyer for one company actually told an expropriation judge: “We can go in and make a wasteland of these farms if we want to.”

When landowner buy-in is required, proponents have to take care to avoid damage. They have to build reputations as companies that landowners want to deal with. And so they have to site, construct and operate their projects more respectfully.

Expropriation isn’t just bad for the environment. It’s also bad for the economy. It creates an artificial decision-making process, where full costs can’t be known. It doesn’t reveal the cost to the person who is losing his land. The market value compensation he gets is often well below his subjective value.

As a result, expropriation reduces the cost to the party that is getting the land. It’s a subsidy — it allows developers to acquire land at below-market prices. It’s important to remember this: Expropriation isn’t just a taking — it’s also a “giving.”

This may lead to inefficient decisions. Owners may well value their land more than the parties that are benefiting from the takings. That doesn’t happen under the free market. Voluntary exchanges move land to its highest-valued use.

As with any subsidy, expropriation can lead to an oversupply of a good. You get more of a subsidized good than you would in the free market — more development, more roads and longer transmission lines.

Subsidies encourage rent-seeking or wasteful investment in political lobbying. The subsidies provided by expropriation can be worth millions, and can provide one party with a significant competitive advantage. This gives parties a big incentive to obtain the power to expropriate. It leads to attempts to influence those who might give it to them — through lobbying, threats to relocate and, of course, campaign contributions. This has the potential to corrupt the political process.

Widespread expropriation also has an insidious effect on the economy by undermining investors’ confidence that their property will be secure. This encourages short-term rather than long-term thinking.

Expropriation also saps public morale. I recently reviewed thousands of comments about an expropriation in Ontario. What struck me was the palpable sense of bitterness — the sense that the citizen had no chance against the state. As one writer put it: “It’s David vs. Goliath, but Goliath always wins.”

There are virtually no rules governing takings. Everything is left to the discretion of governments. The federal Expropriation Act authorizes the Crown to expropriate any interest in land that, in the opinion of the minister, is required for a public purpose.

Across the country, a number of laws give private parties the power to expropriate. Energy companies can expropriate for projects that the National Energy Board has approved. In Ontario, the same is true for projects with Ontario Energy Board approval. New Brunswick doesn’t just give this power to energy companies — it allows “any person … who requires an expropriation for commercial, industrial or utility purposes” to file an application for an expropriation by the government.

Our laws provide expropriators with extraordinary latitude. They replace the rule of law with something arbitrary and capricious. They also blur the distinction between private and public land. They tell us that our property doesn’t exist independently of governments — the government can giveth, and the government can taketh away.

If expropriation is bad for the environment, the economy and public morale, this raises the question: Can development ever be truly sustainable if it relies on expropriation? I’m not sure it can be.

So how might we begin to curb the use of expropriation?

One approach that developers might explore is the reverse auction. In the last 15 years, governments and the private sector have used this tool to procure goods and services. Why not try it for land? Landowners could vie for the opportunity to sell land or easements. This process would keep costs competitive while ensuring that exchanges leave both buyer and seller better off. If both parties don’t think they’ll benefit, they won’t sign the deal.

If a developer isn’t able to acquire the land it wants at a reasonable price, so be it. It may have to work around an owner who refuses to sell. Or it may have to locate its project elsewhere.

Things get murkier when we start talking about roads, railways, pipelines, transmission lines — projects one economist calls “long thin things.” Some of these projects are very important to our economy, and serve a genuine public purpose. In some cases, alternatives aren’t readily available. We worry that one “holdout” can stop a project or make it prohibitively expensive.

On the other hand, respect for property rights is a fundamental principle of a free and prosperous society. If property rights mean anything, we have to figure out how we can respect them in these difficult situations.

In order to do this, we have to grapple with a couple of issues. First, we should be looking at whether holdouts — the most common justification for expropriation — are a serious problem. There isn’t a lot of evidence that holdouts are — or are not — a genuine threat to development.

Some scholars point out that holdouts don’t prevent private developers from assembling large parcels of land. But developers often use buying agents who don’t reveal the nature of the project. Secret assembly is neither feasible nor appropriate for many linear developments.

Still, a proponent can take a page from the developers’ book. It can purchase options on land along several different routes. If it runs into a holdout along one route, it can choose a different route instead.

It’s important to remember that holdouts have power only if no alternatives exist. A landowner can hold out only if he can act as a monopolist. If a developer can go around him, or choose another route, the holdout loses his advantage. It’s also important to remember that strategic holdouts aren’t going to demand too much for too long. Landowners will understand that if they demand too much, the project won’t go ahead — or it will go around them — and they’ll get nothing.

So are holdouts a fatal problem? We don’t have enough information to know for certain. There’s some evidence that suggests “no.” Private toll roads have been built using voluntary sales. And private power producers have negotiated easements for transmission lines. One told me that landowners usually want the extra income a line will bring. But they also want to negotiate the exact location of the line and its proper construction and maintenance. The key thing is that they have to be in control.

But what if the holdout problem does exist? If that’s the case, we should be investigating ways to get around it. There are many things that could be tried — but no one with the power to expropriate has an incentive to do so. Expropriation is like that — it stifles innovation. Who knows what alternatives might emerge if proponents of projects couldn’t expropriate?

The answer may lie in more generous compensation formulas. Compensation generally reflects the land’s current market value, rather than the value of the land once it has been developed. It’s the expropriator that captures the extra value. This isn’t fair — many people invest in land, expecting to eventually reap a surplus from trade. Perhaps we should consider tying compensation to the benefits that the new use will create.

Another option that might be worth exploring is the combinatorial auction, where groups of landowners would put together bids to host facilities. Combinatorial auctions have been used for spectrum rights, airport time slots and bus routes. I haven’t heard of the concept being applied to corridors of land, but one economist thinks it might provide a workable alternative to expropriation.

Another option might involve using property tax breaks to elicit the promise of cooperation from landowners well in advance of any specific project. Landowners could opt in to future land sales at x per cent above assessed value — the higher the compensation demanded, the lower the tax break.

A siting process that is truly compatible with the free market would replace the current regulatory hearings approach with a property rights approach. It would be a voluntary siting process in which proponents acquire land or easements from willing sellers on the open market. It would doubtless be difficult and expensive. But the current regulatory process is cumbersome, it’s costly, it’s not bringing people on side, and it’s not moving projects forward quickly. A voluntary siting process might actually be faster and more effective.

In the end, under a property rights approach, there would doubtless be some genuine holdouts — landowners who refuse to sell not for strategic reasons but because their land is priceless to them. If they really value their land that much, expropriating them could be inefficient. The projects might not be worth the costs, making them socially undesirable.

A property rights approach might mean that some projects wouldn’t go ahead. More often, I suspect, we would simply get crooked developments — pipelines that zig and zag, and roads that twist and turn. These developments might seem more expensive — pipelines might require more pumps at the corners, and traffic might have to slow on highways. But in fact, they wouldn’t be more expensive overall — it’s just that the developers and the users, rather than the landowners, would be bearing the costs.

The theory is enticingly simple: respect for property rights and markets; voluntary, rather than forced, exchanges; no subsidies for land acquisition; no arbitrary exercises of government authority. The application will be hard — really hard. But it’s a challenge worth taking on. 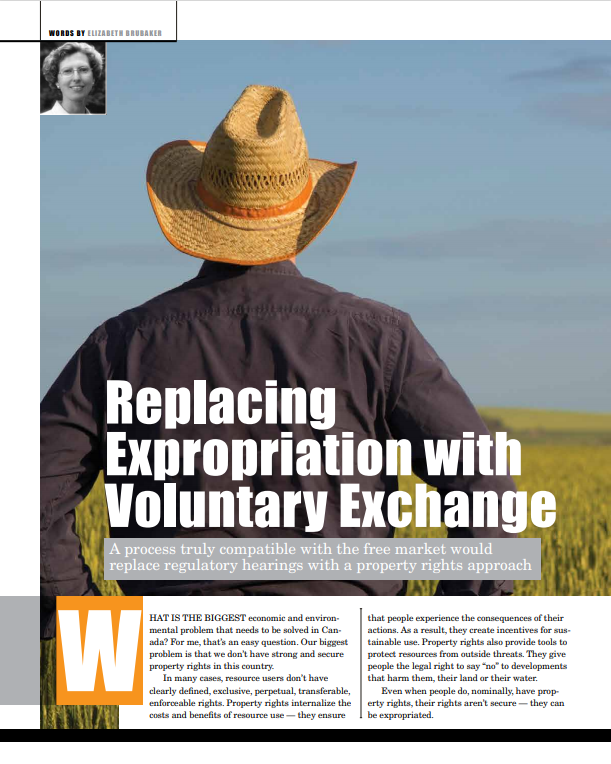 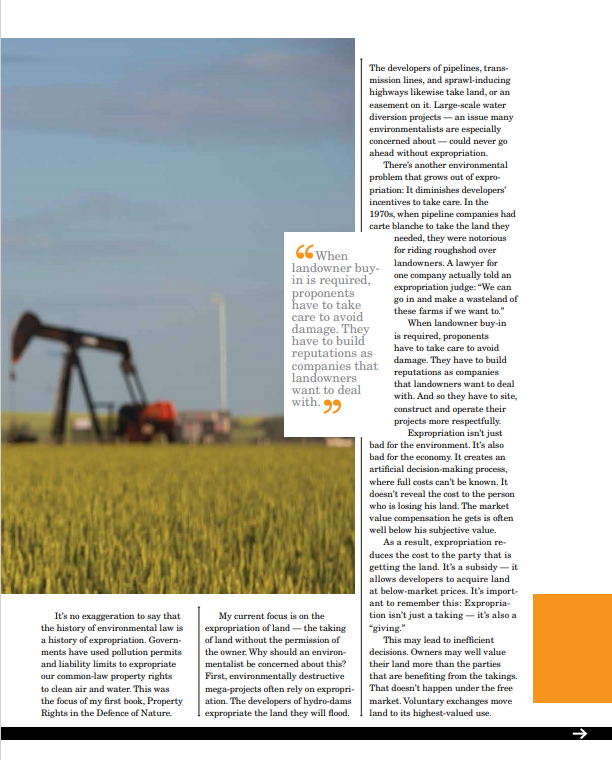 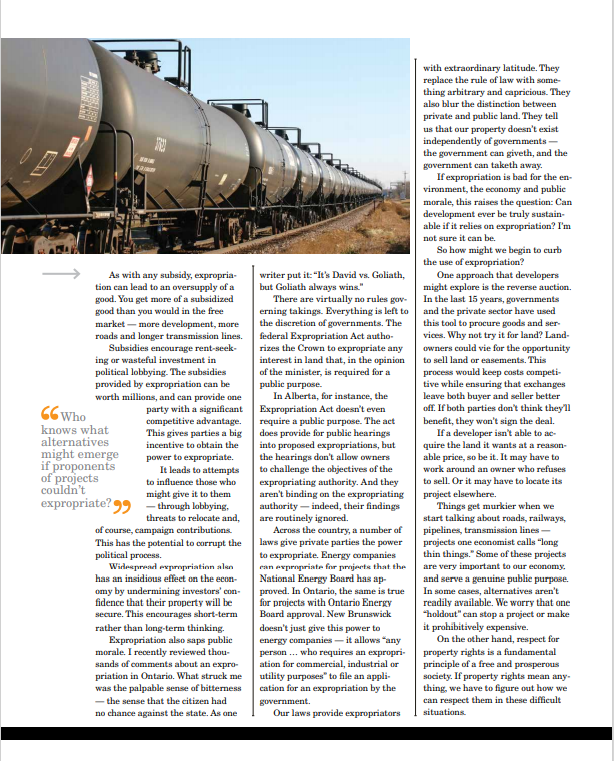 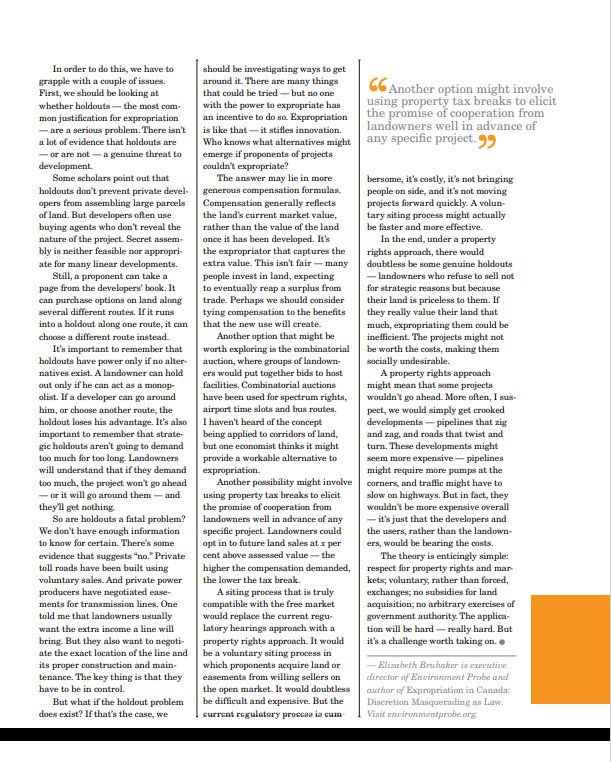 Elizabeth Brubaker is executive director of Environment Probe and author of Expropriation in Canada: Discretion Masquerading as Law. See www.environmentprobe.org