How alternative farming practises can revive soil along your right-of-way.

On our farm, we are making 2020 plans with the hope of a better growing season than what occurred in 2019. For many farmers across Western Canada, May was abnormally dry; rain finally came in mid-June; July was relatively normal; and then Mother Nature had her fun August to October.

But farmers were not the only ones affected by the excessive late-season rain. Enbridge workers struggled to get the remaining topsoil back on the land before the snow fell, and unfortunately, were unsuccessful. The company plans to have workers back out in late May to move the topsoil back in place along the 100-km stretch in southeast Saskatchewan.

But for now, the soil along the right-of-way and the piled-up topsoil sits exposed, including some of our own land in the Fairlight, Sask. area, along Line 3.

As farmers, we will need to take steps to start the recovery process.

Whether your right-of-way was covered or not, there are things we can do to protect it come spring. I have talked about the benefits of alternative farming practices on soil health before, but it was not until I attended a presentation by Dr. Kris Nichols at the Saskatchewan Soil Conservation Association annual conference, that I had a ‘recipe’ for how to improve the soil. In her presentation, she introduced the pyramid on the right as keys for soil regeneration.

Roots are like the glue that holds your soil together. Any significant disturbance, like that caused by pipelines, compromises the integrity of the soil structure. Living roots continually feed the soil ecosystem via interactions with fungi, bacteria, and other microorganisms. From these relationships, the roots promote the formation and stability of soil aggregates. This then improves water filtration through increased porosity.

Living roots require the plants above ground to be green and growing — harvesting sunlight. Our window of opportunity to keep things green is relatively short. In Western Canada, there are 120-130 frost-free days and usually 1200-1600 growing degree days, depending on the growing region. Despite these limitations, plants other than the crops we typically grow can utilize the sunlight earlier and longer in the season. Mixing these crops with grain crops or sowing land to perennial hay species can keep the land green outside of the short growing season.

It is important to consider types of plants, but also microbial and macrobial populations when promoting diversity, or biodiversity. Plant and microbe diversity are closely associated with one another. The different carbon to nitrogen ratios of plants build microbe populations that break down residues and release nutrients back to the soil. As the microbe population grows, it also aids in the resilience of the soil to environmental conditions (soil aggregates) and can start to protect living plants from the threat of disease and pests. Cover crop mixtures do a great job of increasing plant diversity above ground and building the microbe population below ground.

Reduced or No Synthetic Inputs

Resource intensive agriculture has become the mainstream practice for growing crops in Canada. While fertilizers and pesticides have been beneficial in increasing yield, recent global trends show a plateau and even a decrease in yield (Figure 2).

The increased use of inputs has had a detrimental effect on the soil’s biological system — limiting the plants’ natural association with beneficial organisms. Reducing the use of these inputs can further assist in the regeneration of soil along the pipeline and encourage the development of more diverse populations.

Mixed farms have moved to specializing in crops or livestock to improve simplicity and logistics on the farm. But for the few that do have both, livestock is a great addition to improving soil health. Proper livestock management improves soil health through nutrient cycling. Nutrients from manure are often in a more plant-available form and also promote the increase in microbial populations. The stress caused by animals on the plant encourages roots to grow deeper, further improving water infiltration, soil structure and compaction.

Enbridge takes the first step in soil armour once the topsoil is moved back into place, by covering the soil with straw. While this does provide some early protection from the elements, it does not start the building process to knit the soil structure together.

The best soil armour relates back to the living roots. Just like we protect ourselves from the elements with clothing, plants are the best way to cover the soil. More importantly, plants are able to utilize solar radiation and water with heat to grow and in turn, feed organic matter and nutrients back to the soil.

This one is already widely practiced by farmers. The western Prairies have benefited from the introduction of reduced or no-till systems through the building of organic matter and soil structure. Much like the disturbance of installing pipelines or integrity digs, any form of tillage disturbs the soil ecosystem with harmful effects. Reduced tillage allows the soil ecosystem to build up and all of the organisms to function in balance.

This is just a short outline of steps we can take to bring the pipeline right-of-ways back to life. While some steps may seem a little extreme, I encourage everyone to consider how they can change management practices on their farm to improve two or three steps

Andrea De Roo has a BSA in agronomy and a M.Sc. in plant science. Additionally, she is a P.Ag. with the Saskatchewan Institute of Agrologists. Andrea farms with her family near Fairlight, Saskatchewan, and now also works with South Country Equipment as a Crop Intelligence Agronomist. 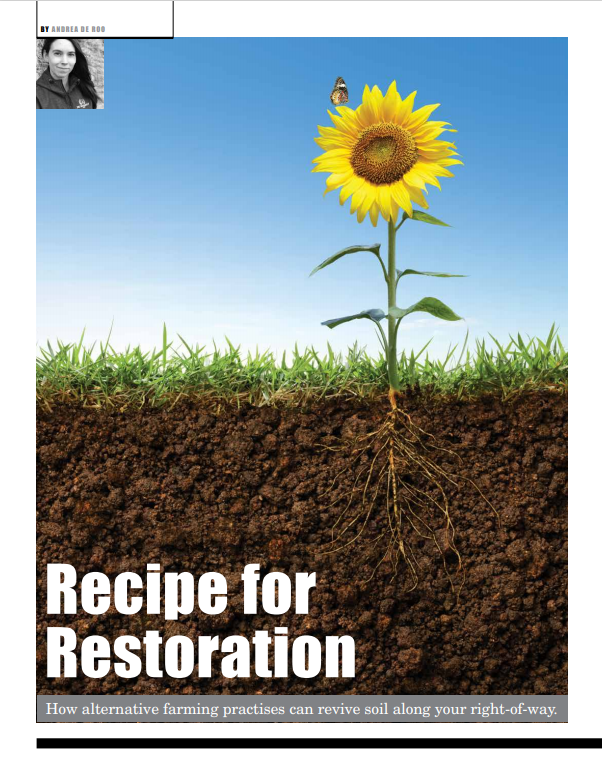 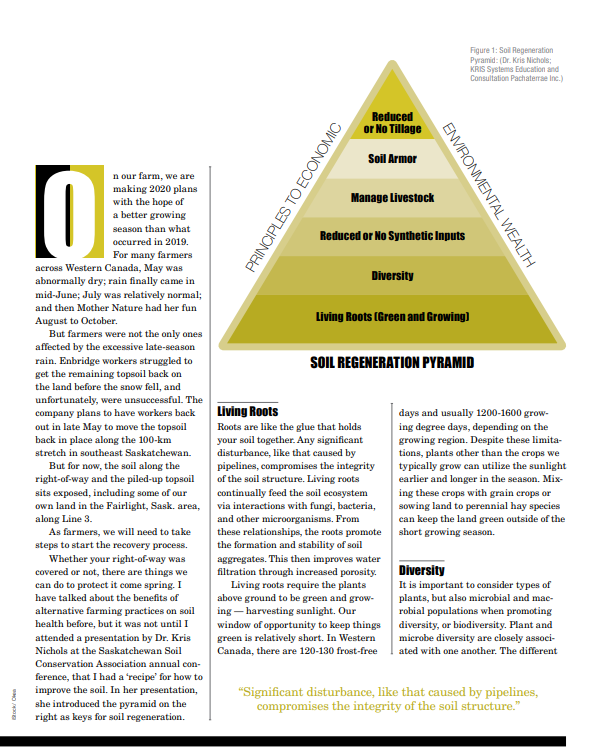 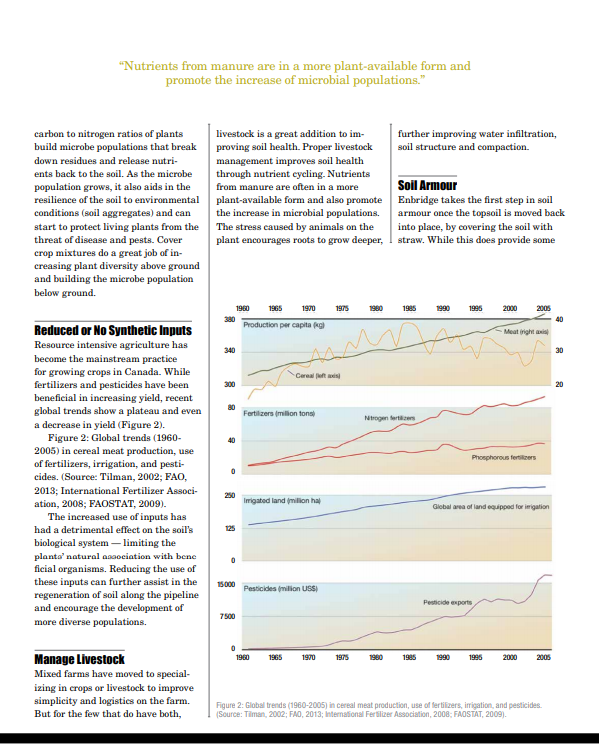 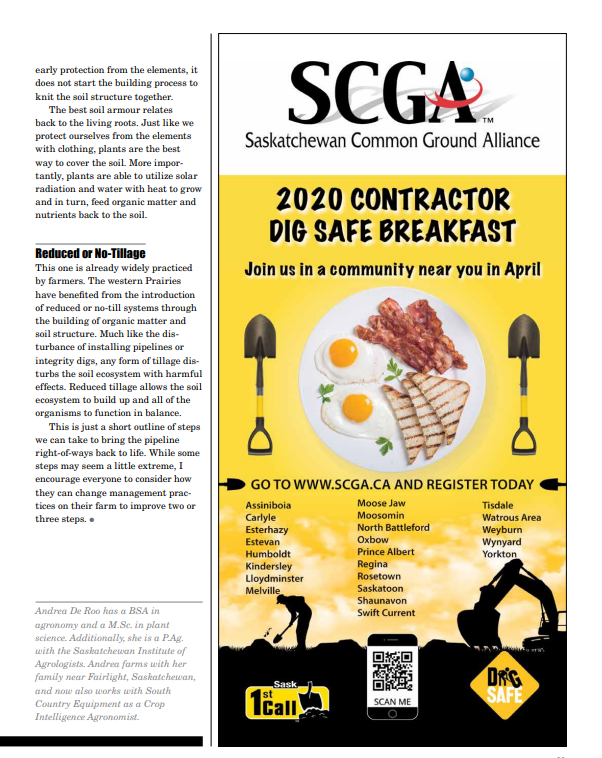