CAEPLA has always been about safety and the environment.

As you know, these issues directly affect landowners who have to deal with the pipes on a daily basis. These pipes are crossed many times in the course of working fields, especially in spring seeding and harvest. Ranchers are conscious of where to drill post holes for fencing when the pipes cross their cattle corrals, while others are conscious of where they can cross when harvesting wood lots.

Farmers and ranchers are “stewards of the land” and the environment is literally their very home and livelihood.

That is why, in a recent win-win agreement with Enbridge, CAEPLA negotiated that further independent research be done into how pipelines corrode once pipelines are decommissioned.

Because landowners are very concerned about having pipelines decommissioned/abandoned on their property, it was important that specific criteria be followed to ensure that the research would address the concerns of landowners and that it would be conducted in a transparent way. A careful process was followed to decide on the parameters of the research, and to evaluate “blinded” proposals submitted by Canadian universities to ensure that criteria was met.

The research contract was awarded to the University of Calgary after careful scrutiny of each proposal against all pre-determined criteria. In March, Enbridge and CAEPLA met with the university and the professors in charge of conducting this independent research — research the lead professor called “the first of its kind.”

The university was thrilled to have CAEPLA involved, recognizing that we, as an association of directly affected landowners who have a vested interest in ensuring the research be done independently, add a great deal of credibility to the process.

The Enbridge crossing app is, we hope, only the first of many such advances where we can enlist company expertise to make pipeline landowners’ lives safer, more productive and worry-free.

CAEPLA has also been an active participant in addressing property rights and safety issues in the formation of the new Damage Prevention Regulations. These regulations need to be in place by June 2016 as required in the new Pipeline Safety Act.

Unfortunately, this is not a transparent process, and by judging by the initial proposed regulations as printed in the Gazette in April 2016, it would appear the National Energy Board continues to ignore landowners and your legitimate issues. CAEPLA continues to put forth its position that the regulations should not penalize landowners for pipe that is the rightful responsibility of the companies.

Landowners have also been seeking more information on a variety of issues that concern them. As a service to landowners, CAEPLA launched its Workshop Series in November 2015 and after an enthusiastic response on the prairies, took it on the road to Ontario.

The first workshop in this series was Learn How to Cross the Line — Safely. Landowners in attendance appreciated the interactive atmosphere and sometimes lively discussion, freely asking questions to gain knowledge of how to use the Enbridge crossing AgTool.

Also available was the AgTool App, developed at CAEPLA’s request. Landowners downloaded the app onto their smartphones, making it convenient for them to access the tool as well as the number to call should they have any questions about crossing.

Although no landowner wants the restriction of having to get permission before crossing a pipeline on their land, the reality is the NEB legislation requires that they have it. Without written permission, the liability for damaging a pipe by crossing without permission falls on the landowner. Enbridge has made it easier for landowners by developing this crossing tool. Of course, the most important thing is to avoid hazards in the first place.

Landowners like you continue to tell us they want to see innovations that make living and working with pipe on their property safer and more convenient — and by reaching out to industry, CAEPLA has discovered a new willingness on the part of companies to work toward that.

The Enbridge crossing app is, we hope, only the first of many such advances where we can enlist company expertise to make pipeline landowners’ lives safer, more productive and worry-free — CAEPLA is committed to consulting with landowners and industry to deliver these benefits to you.

Annette Schinborn is COO and Director of Landowner Relations at CAEPLA. Before joining the team at CAEPLA, Annette worked with grassroots nonprofits including the Canadian Taxpayers Federation, Prairie Centre Policy Institute and the Western Canadian Wheat Growers Association. She has worked closely with landowners, farmers and ranchers on issues of concern that have affected them — tax policies, agricultural policies and now pipeline and property rights issues. 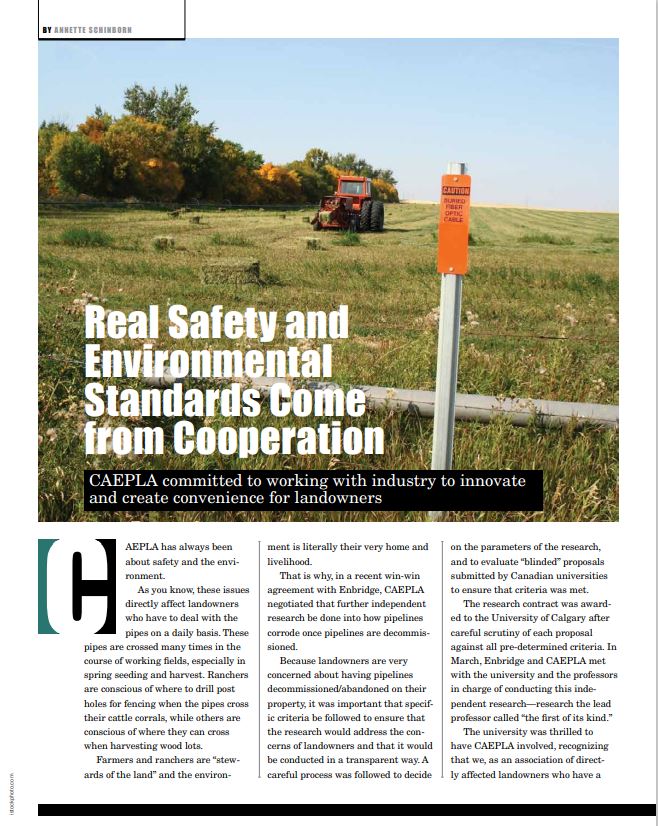 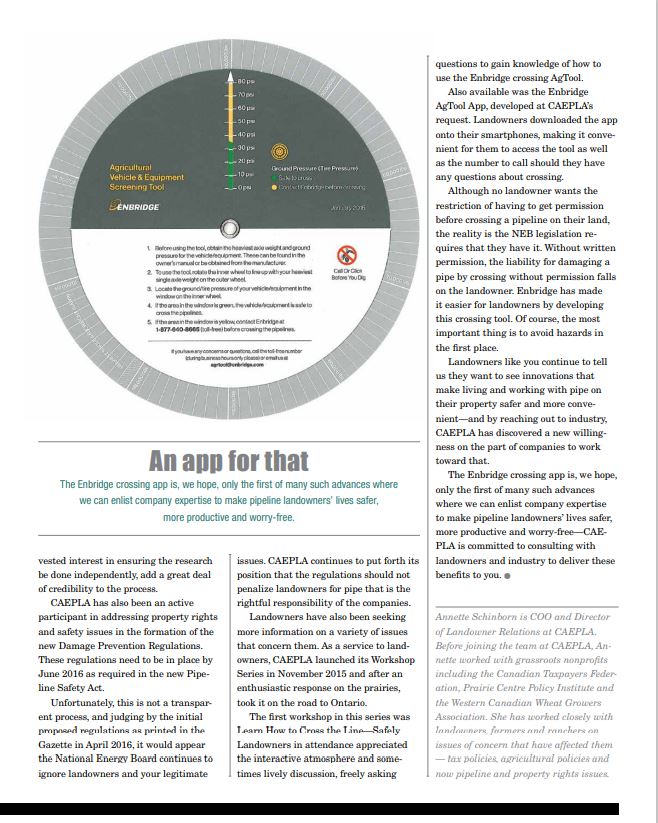