Anyone could be forgiven for thinking that all Quebecers are opposed to Western Canadian crude, and to the infrastructure required to carry it to Quebec and the Atlantic. After all, our duly elected representatives at both the municipal and provincial levels seem to be falling over each other lately to speak out against oil and pipelines.

The truth of the matter, however, according to a Leger poll commissioned by my organization, is that 59 per cent of Quebecers think it is preferable for the oil imported from outside the province to come from Western Canada, versus only 13 per cent who would prefer that we import it from other countries (and another 28 per cent who either had no opinion or refused to answer).

That’s pretty much a slam-dunk. Indeed, Quebec doesn’t produce any oil to speak of at the moment, so given we use plenty of it—and will continue to do so for the foreseeable future—it has to come from somewhere. Most Quebecers who have an opinion on the matter think it makes a lot of sense to get oil from Western Canada.

As for how we should get that resource here, once again Quebecers’ opinions diverge from those expressed by many prominent politicians. The poll showed fully 41 per cent consider pipelines to be the safest means to transport oil, far ahead of those who think that trucks (14 per cent), ships (10 per cent) or trains (nine per cent) are safest.

Quebecers are also much more positive than one might imagine about developing the province’s own oil resources. More than half (54 per cent) think the province of Quebec should exploit the oil resources that exist here, versus just 23 per cent who think we should continue importing all the oil we use from outside our borders.

Of particular interest is the fact that those who identify with the province’s Liberal Party, which is currently in power, are even more favourable to oil and pipelines than the average Quebecer: 75 per cent think it’s better for oil imported from outside Quebec to come from Western Canada than from elsewhere in the world, and 56 per cent consider pipelines the safest means of transporting the oil. As for developing Quebec’s own resources, those who identify with the Liberal Party are about as favourable as the average Quebecer at 57 per cent.

Quebec Premier Philippe Couillard may worry publicly about the “savaging” of the natural environment of Anticosti Island, where significant deposits of recoverable oil are likely to be found. Montreal Mayor Denis Coderre may get into a nasty war of words while joining some of his counterparts in opposing the Energy East Pipeline, to the point of insulting Albertans by suggesting, as he did, that they think The Flintstones is a documentary.

But Quebecers, by and large, are not on board with these negative messages. We want our oil to be developed, and we want western Canadian oil to flow here, preferably by pipeline. I do hope that, going forward, Quebecers’ actual opinions regarding public policy choices on these matters (as opposed to those of the loudest pressure groups) will be taken into account.

Michel Kelly-Gagnon is President and CEO of the Montreal Economic Institute, an independent, non-partisan, not-for-profit research and educational organization. Through its publications, media appearances and conferences, the MEI stimulates debate on public policies in Quebec and across Canada by proposing wealth-creating reforms based on market mechanisms. It does not accept any government funding. 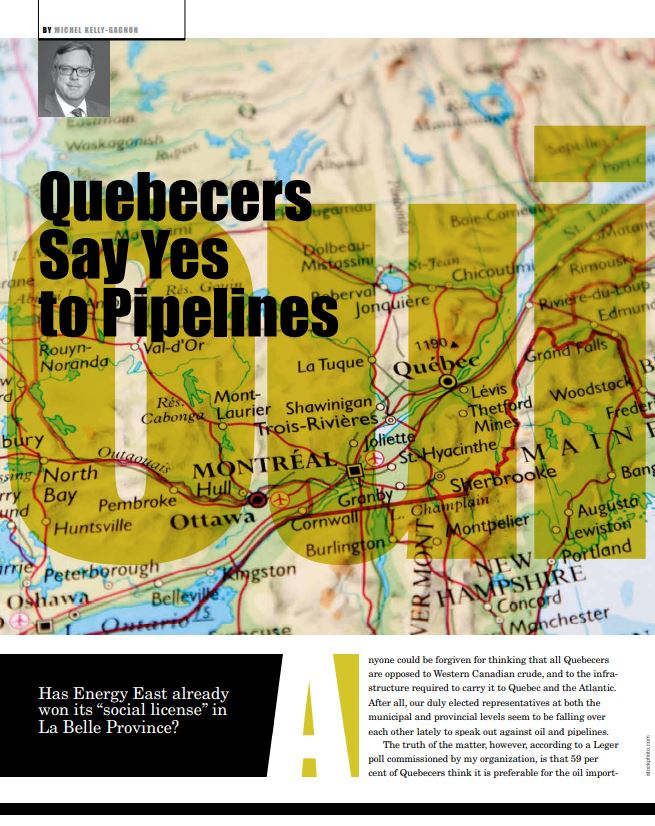 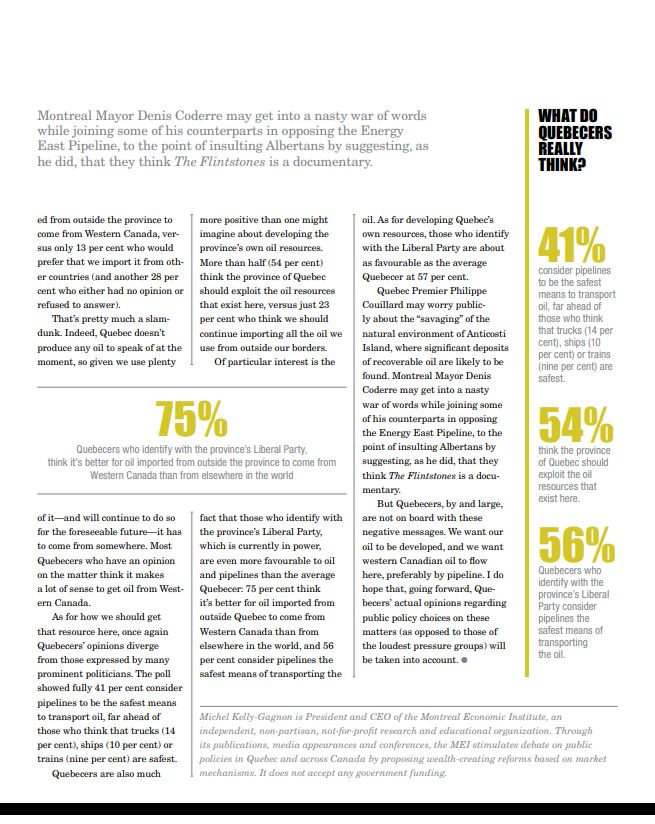