For nearly a quarter century, CAEPLA has been on the frontlines tackling pipeline landowner concerns. We have been so successful in resolving landowner issues and compensation that many of our members’ neighbours ask to have pipelines put on their property if a company has signed a contract with us.

Which is why, in the aftermath of the catastrophic nationalization of the Trans Mountain pipeline and expansion project (TMX), CAEPLA has been taking countless calls from worried residents along the TMX corridor.

"At the core of the agreement is a commitment between the parties to engage a group of independent third-party monitors, to ensure that promises made are kept."

Here is a brief look at what every Trans Mountain pipeline landowner ought to be reflecting on as the reality of a new federal Crown corporation on their property gets real.

CAEPLA agreements address many issues that have never been addressed before. They also address issues most pipeline companies won’t even look at due to their enjoyment of regulatory government privileges: right of entry in Canada, or eminent domain in the U.S.

Both are legal land theft, arranging for the transfer of your property to shareholders in energy transport companies. Both act as a kind of subsidy to the company or a deep discount on market rates to lease land. Both are a way to ignore legitimate landowner concerns in a way that would never be possible in a commercial lease.

Having said that, CAEPLA did not attain our many victories for landowners by simply protesting the special entitlements provided to industry or lobbying government for our own special privileges. Instead, we used our right to freely associate and worked cooperatively with groups of landowners to level the playing field.

Our many years of experience in negotiations has resulted in the toughest and most fair contractual agreements ever achieved by landowners who have been imposed upon by federally regulated pipelines.

We have negotiated precedent-setting landowner settlement agreements on two major Enbridge projects in the last decade, namely the Alberta Clipper/Southern lights project in 2007 and then the Line 3 Replacement Project in 2015, which is under construction as you read this.

The latest Enbridge Line 3 Replacement Project (L3RP) agreement outlines the most stringent obligations for careful soil handling and biosecurity ever seen in the industry.

Since its inception in 1959, the National Energy Board (NEB) has consistently undermined landowners and their property rights, preventing us from protecting our properties, families and investments.

But by working together to convince Enbridge that there is a better, more cooperative way, we were able to address landowners’ legitimate concerns and get NEB and cabinet approval. This was accomplished even as both the NEB and cabinet bungled landowner and industry initiatives to get pipelines built under undue influence of anti-pipeline activists.

"I can tell you this: Crown corporations disrespect property rights more than the worst private company. TMX landowners have much to fear."

Having said this, I have dealt with Crown-owned energy transport companies when I led CAEPLA over the decades. I can tell you this: Crown corporations disrespect property rights more than the worst private company. TMX landowners have much to fear. Now, more than ever, they will need a proven business advocate to help protect their interests and negotiate a robust business contract.

CAEPLA, and our member landowner organizations on the L3RP project, made clear to both Enbridge and the regulator the many escalating concerns landowners have. Especially with respect to environmental, social and economic impacts experienced as a result of the continuing expansion of pipeline corridors.

Pipeline design and safety concerns related to proposed depth of cover, pipe thickness and future pipeline abandonment, as well as cumulative soil and productivity impacts related to multiple pipeline construction are all among the issues CAEPLA has put on the table with forward-thinking Enbridge. Restrictions on more intensive agricultural land use, future development and deficiencies in current compensation packages with respect to recognizing continuing financial impacts are also being addressed.

The standards on L3RP are a refinement of earlier terms with new Biosecurity Protocols, an agreement regarding the decommissioning of the old pipeline. At the core of the agreement is a commitment between the parties to engage a group of independent third-party monitors, to ensure that promises made are kept.

With pipeline construction well underway on the nine spreads of this 1,500-kilometre project crossing three Canadian provinces, I can effectively report on the successes of our settlement and the quality of the relationship between Enbridge and its landowner partners.

Enbridge has stressed the importance of the “CAEPLA Agreement” at every kick-off meeting along the corridor. The company understands that addressing landowners’ legitimate concerns is the way to get pipelines built in future. It is committed to building the project from this perspective and has made it clear to its employees, its lands people and the construction contractors that they all must live up to the terms of agreement on all lands, and treat landowners with the greatest respect.

Here is the quid pro quo on L3RP: Enbridge has engaged in an almost forensic examination of landowner issues, and continues to engage with CAEPLA to make incremental improvements. In return, we have doubled down on our commitment to help get projects built in a safe, fast and efficient fashion. This is a quadruple win: for landowners, industry, economy and environment. 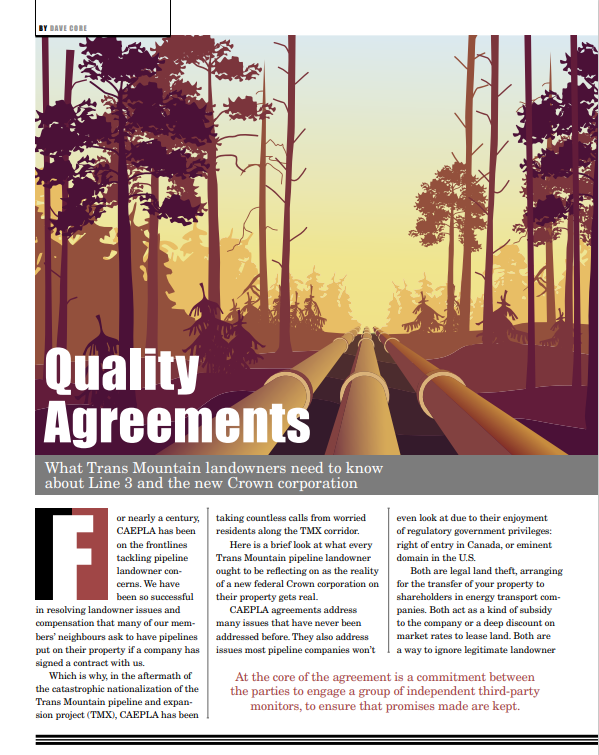 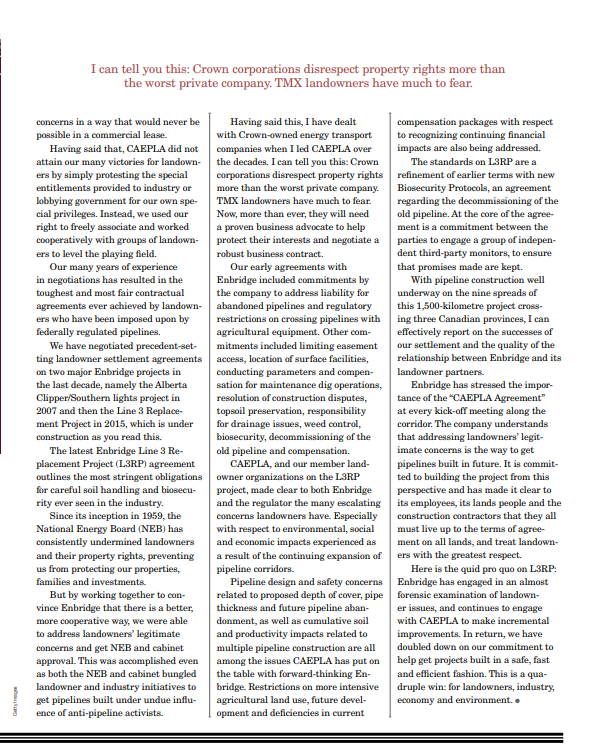