The Liberals say they are looking for an investor to divest themselves of an economic tragedy.

I am generally amused by Conrad Black’s cheekiness in his National Post columns.

But on June 8 of this year, I had to plant my flag in the ground not occupied by Mr. Black, who praised the Liberal government on its proud purchase of “gently used pipe”—namely Trans Mountain.

The government spent $4.5 billion in an attempt to solve a problem it created, not including the hundreds of millions that it will take for repair, expansion construction or spill clean-up costs for as long as the government owns the asset.

The Liberals say they are looking for an investor to divest themselves of an economic tragedy. Specifically one that is willing to step into a muddy puddle of politicians, special interest groups, questionable valuations and a recent court decision that pipelines must be built with environmental studies and public consultation.

The government has now promised to indemnify potential suitors for this project, but lingering financial responsibilities and investor indemnification could tie up public funds for decades.

Assuming the courts approve the pipeline following legal challenges from municipalities, environmental and Indigenous people, the project could be more appetizing for national and local support—if all interested parties were given opportunities to participate.

The new narrative coming from the Liberals has been about providing Indigenous people with an equity stake moving forward. However, this brings up a few questions:

1. Where does that leave other landowners with 60-year-old oil pipelines running under their property?

2. Where would the funding for Indigenous participation come from?

3. Which Indigenous groups are interested, and which are not?

Determining a balance stake in the equity of any “nationalized” asset is complicated, especially when some Indigenous people have come out and opposed it.

At a surface level, the equity potentially offered to Indigenous people is in essence a trade-off from one level of government to another and misses the mark in terms of value offered to all Canadians.

So far, Kinder Morgan shareholders have been the only ones to benefit, and Canadian taxpayers are the ones left to foot the bill.

By establishing a layered hierarchy of government interests, including municipal, provincial and federal, the views of private individuals become increasingly muted.

Finance Minister Bill Morneau has been quoted as suggesting that private interests couldn’t get this accomplished and the government was forced to make this happen. This narrative is extremely dangerous given that governments can make decisions with bottomless pits full of money at their disposal, compared to making sound economic arguments when coming to business decisions. In fact, it was economist Murray Rothbard who asserted that government is “a means to be ranged against the ‘private sector’ and often winning in this competition of resources.”

I’m not suggesting that I have all the answers to balancing out all viewpoints, but to me, whoever has ownership of the land the pipeline is on should probably be the pre-eminent interests of the equity stake proposed by Morneau.

This group could include property owners in direct proportion to their vested interests in the project and limited to such a stake. Other groups would have to prove their interests in a solid, quantifiable manner, such as municipal and provincial interests. If a group of landowners have a provable vested interest, then municipal governments do not need to act on their behalf.

This boils down to having an ability to seek restitution (payment) from a company or government not fulfilling its proper due diligence and acting negligently, instead of retribution (punishment).

If someone with a proven vested interest could seek vast sums in compensatory payment, then the economic calculation of project viability would automatically include stronger due diligence. It’s similar to an auto insurance company seeking damages against a negligent driver—not only would the insurance company profit but the costs would be totally deferred to the negligent party.

This issue is about our ability to enjoy property rights in a private market system. If someone devalues our property by mishandling their own affairs, then we should be able to seek restitution on the grounds of economic impact. And if that payment included ongoing costs for negligence for environmental disasters, then perhaps tertiary interests could be met as well.

In the end, I don’t think the full impact was considered when the pipeline was purchased from Kinder Morgan, and that's what Conrad Black overlooks. 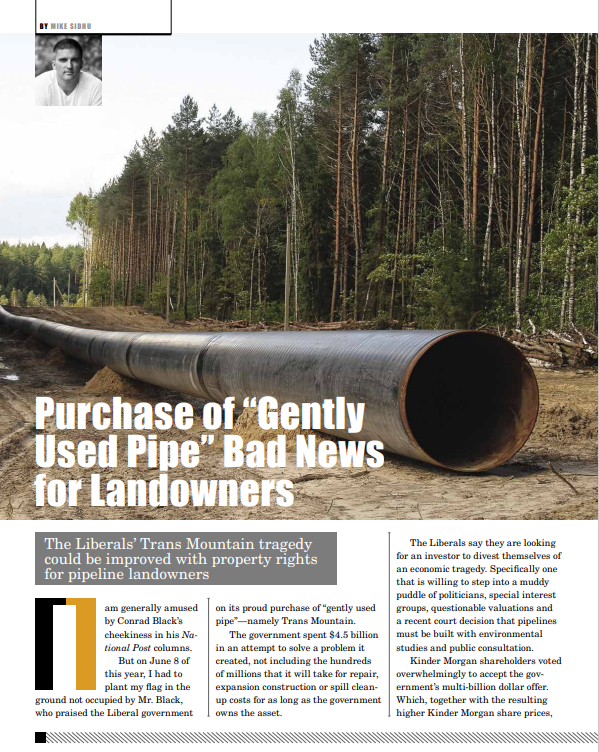 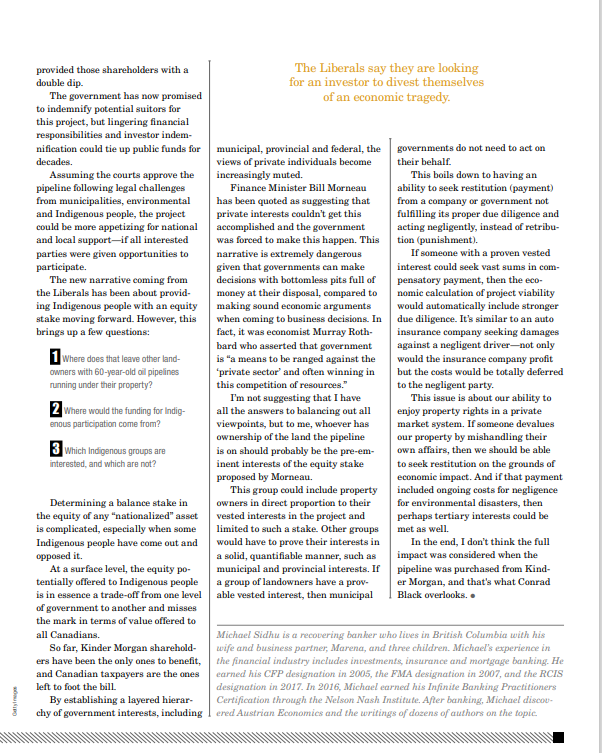