Central planning is no way to run the energy sector…

"Our country is filled with farms, other business enterprises and housing developments on acres assembled without government expropriation."

A prevailing myth or half-truth in Canada is that minimal government interference and the presence of considerable oil and gas resources combine to make individuals in Alberta wealthier than residents in other provinces. While geological assays confirm massive reserves in Alberta, the proposition about minimal government interference is false. The consequences are profound.

At least three dozen times in his various books, essays and other publications, economist Ludwig von Mises described the incontrovertible fact that the foundation of every civilization, including our own, is private ownership of the means of production. When individuals are coerced with respect to the use of their bodies, their property and in their interpersonal exchanges, it reduces the sphere of private resource ownership, it impacts the pattern of production and consumption and it erodes the foundation of civilization.

Indeed, the devastating failure of centrally choreographing the lives of individuals is the great lesson of the 20th century.

This context is essential to understand the nature of economic activity in Alberta pertaining to oil and gas. In Alberta, subterranean oil and gas deposits are not privately owned. As such, the rate and extent of their exploitation is determined by central authorities.

The process of rendering them closer to final goods for consumers through extraction is orchestrated by government agents, as ordered by government directives. Those wishing to develop the subterranean oil or gas deposit under these conditions must also pay a royalty for the right to do so. The royalty is fixed by central authorities at a politically determined level related to their perception of the benefits obtained from the right to develop the oil or gas deposit.

In the absence of private ownership of subterranean deposits, prices do not and cannot arise for the right to develop the oil or gas resources. Royalties are not prices arising through market processes; instead, royalties, like taxes, are coerced takings.

After a developing firm acquiesces to all the demands of various central authorities, extracts and takes ownership of the oil or gas resource, the end uses to which these primary products are put is influenced by innumerable interventionist policies at every stage of production. The petro-chemical marketing channel retains the appearance and terminology of the pure market economy, while production activities and product allocations at every stage of production are swayed by government orders which all are bound to obey.

Few people would disagree about the net negative effects of government coercing involuntary contributions of income and directing interpersonal trade. However, with glaring cognitive dissonance, many of the same people would agree some projects require government to expropriate private property for particular uses against the owners’ consent so that public welfare can be enhanced.

Overwhelmingly, these supposedly special needs justifying the exercise of special powers are infrastructure projects that require the acquisition of large contiguous tracts of land. Pipelines and transmission lines are obvious examples.

According to this view, if the social welfare is best served by building a line from point A to point B, then all the land along the route must be acquired. The concern is without power of government to expropriate, private landowners could scuttle the project, and social welfare gains would be lost.

It’s quite possible that some real-world situations could correspond with this view. But it is implausible to suppose that government needs, or should be entrusted with, a land-seizing power that no property owner would entrust to somebody else.

One reason is that entrepreneurs routinely assemble large contiguous tracts of land without relying on expropriation. Our country is filled with farms, other business enterprises and housing developments on acres assembled without government expropriation.

A second reason is the power to seize someone else’s property is both dangerous and tempting to those who legally possess it. It’s dangerous not only for the economic reasons above, but also because it puts political freedoms in jeopardy. Government powerful enough to give people everything they want is a government powerful enough to take away from people everything they have.

Because individuals are coerced at every stage of value-added from in situ oil and gas to the more than 6,000 final consumer goods made from oil and gas, the building blocks of civilization — liberty and private resource ownership — are circumvented or absent. And this has important consequences for all of us over time and space.

Despite attempts to invalidate this argument, the reality remains indisputable: Unhampered market processes tend to put every means of production to the use in which it is most beneficial for the satisfaction of human wants. When authorities interfere with this process to bring about a different use of productive factors it can only impair the supply, it cannot improve it. Impaired supply does not make people richer; it makes us poorer, both here in Alberta and everywhere else. 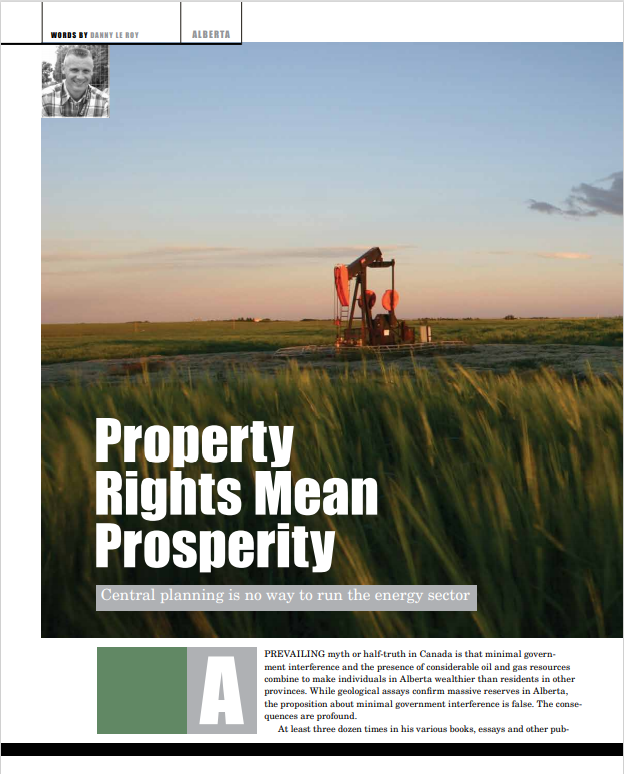 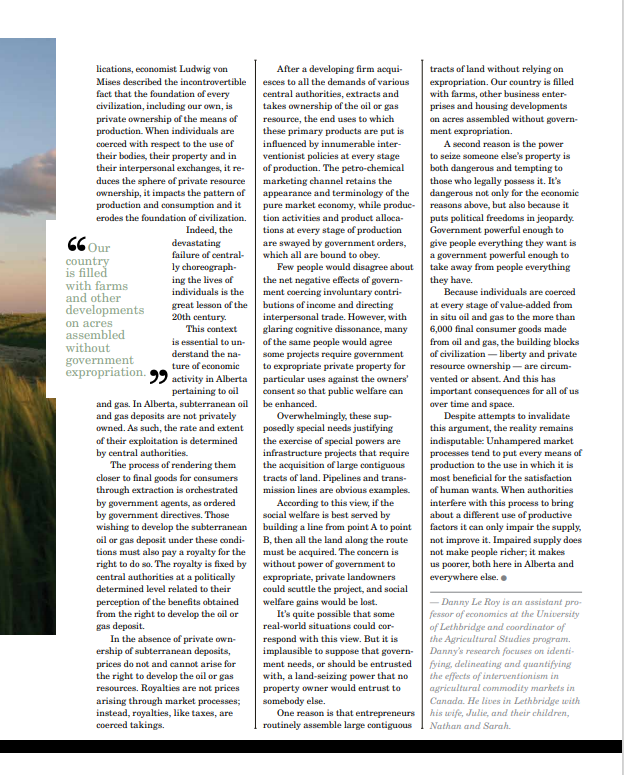 — Danny Le Roy is an assistant professor of economics at the University of Lethbridge and coordinator of the Agricultural Studies program. Danny’s research focuses on identifying, delineating and quantifying the effects of interventionism in agricultural commodity markets in Canada. He lives in Lethbridge with his wife Julie and their children Nathan and Sarah.