From clubroot to COVID, what can Canadians learn from pipeline landowners?

“It wasn’t just the pipeline that was buried — my rights were buried, too.”

“A crisis need not lead to a permanent expansion of government powers – as long as the public remains vigilant.”—Kenneth Roth, executive director of Humans Rights Watch.

Like many of you, I grew up on land with pipelines and later owned land that had pipelines buried in our fields.

Those pipelines were out of sight, out of mind—until they weren’t.

As long as those pipelines remained physically and philosophically out of sight, it was easy to believe I was a free man living in a country that respected property rights.

Then, a company that owned the pipeline and the right-of-way across my land wanted to convert an oil pipeline to gas. The company’s land agent eventually convinced me and some of my neighbours to sign a document that not only gave the right to convert the pipe, but in the fine print also gave the company power of attorney over my land.

It was only after I signed—a bit of buyer’s remorse, perhaps—that I came to truly understand it wasn’t just the pipeline that was buried—my rights were buried, too.

A bad deal was the beginning of my enlightenment about how the energy business—a business in bed with government—worked.

Fast forward to today and consider what is happening around us. A declared public health emergency has made it clear how easily human nature can be taken advantage of as politicians, bureaucrats and other government embedded businesses work to take away our rights.

The same way my own rights were taken away decades ago.

The same way landowners’ rights continue to be taken—and, arguably, the same way all Canadians’ rights have been taken away since the COVID-19 panic began.

Naivety, complacency, lack of knowledge, a misguided respect for “authority,” inalienable trust, herd mentality and fear of big government have all resulted in panic.

Panic, followed by fear and a misguided respect for authority can combine to create the kind of herd mentality that causes groups of landowners or entire societies to surrender their rights.

But working together with a group of more experienced pipeline landowner neighbours, we were able to leverage our strength in numbers. We pooled resources, hired experts and legal counsel and stood up to the pipeline company bullies and stopped that project.

We then came to understand how the government created the National Energy Board (NEB) as a blanket to cover up our legal rights with administrative law and regulation that limited our access to courts and our right to be heard.

“Whatever your beliefs about COVID, it cannot be denied it was the suspension of property rights that made destructive lockdowns and other restrictions possible.”

Later, a court of appeal decision—that stated landowners had no rights or remedies outside the NEB—confirmed our sentiments. The regulatory regime was nothing more than a racket relying on bureaucratic processes to snowplow landowners, facilitating a transfer of wealth from farmers to pipeline company shareholders.

After following pipelines across the country speaking with landowners about the realities of the NEB being created simply for government and corporate rent control, I have spent the last two decades as their advocate working to promote respect for property rights and individual freedom.

It was at this point I began crisscrossing the country to educate other pipeline landowners about our experience—about not trusting the NEB and standing up for their property rights instead.

Many said I was crazy. But over the course of almost three decades, most of the doubters have become some of CAEPLA’s staunchest supporters.

I believe the lessons learned by the pipeline landowners movement can be shared today with all Canadians.

Before, landowners often panicked when targeted with fear and misinformation tactics by land agents and government.

But when landowners realized panic resulted in giving up our rights and making bad decisions under duress, we learned to work together.

By working together, we were able to defend all of our property rights.

Canadians can do the same.

Whatever your beliefs about COVID, it cannot be denied it was the suspension of property rights that made destructive lockdowns and other restrictions possible.

By uniting to defend our property rights, Canadians can take back our rights and responsibilities. Just as CAEPLA and our members take contagious crop diseases like clubroot seriously. We deal with these diseases responsibly through voluntary, private and contractual action. That is what our successful biosecurity protocols are all about.

And no, I am not suggesting for a second that clubroot is as serious a threat as the coronavirus pandemic.

When a land agent comes to your door, CAEPLA always counsels landowners not to panic.

Next, we advise landowners to trust but verify. Trust their instincts, but verify everything they are told—take nothing at face value. Ask questions and think critically.

This approach would have served Canadians well during COVID—and it still can. Commonsense and vigilance always beats blind faith in government and media.

When government and media declared the pandemic, we trusted but we did not verify.

I’d like to think we are wiser more than two years later.

We can get pipelines built while upholding property rights, and we can fight pandemics the same way.

Dave Core is the founding and former president and CEO of the Canadian Association of Energy and Pipeline Land - owner Associations. He presently serves as CAEPLA’s ombudsman and director of special projects. Core is also the principal of Dave Core and Associates, a consulting firm specializing in land matters and industrial relations. 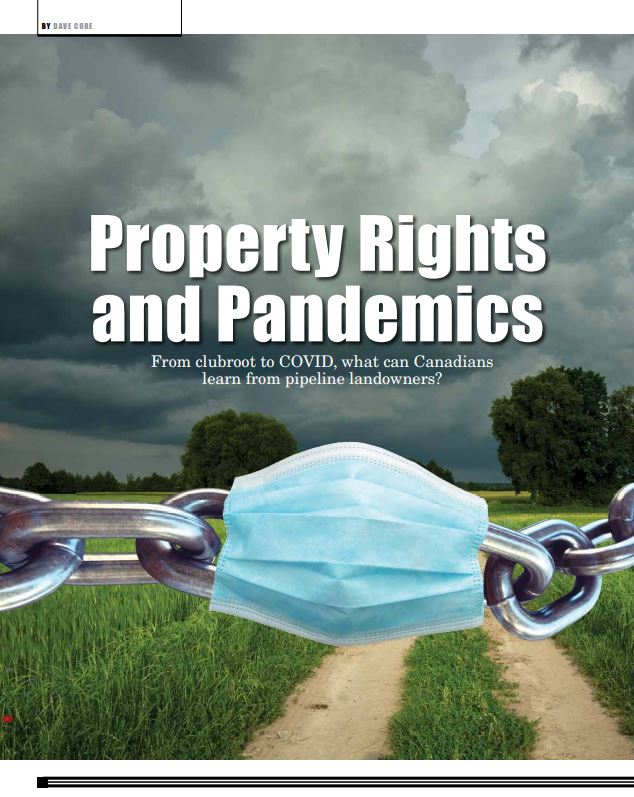