"When the state via law enforcement fails to enforce the law, politicians and police send the message that activist stunts trump private property rights."

Nebraska Governor Pete Ricketts is bracing for protests in the next phase of hearings on Keystone XL.

Following protests surrounding the Dakota Access pipeline (DAPL), Ricketts said, “There’s certainly going to be people in Nebraska with legitimate concerns about the pipeline and they’ll want to express those, but if we have people coming in from out-of-state, those are the ones that can end up being dangerous. They really don’t care about the local Nebraskans. They’re there for a political agenda.”

Throughout North America, it is increasingly crucial to clarify to the public that landowners almost always do not belong in the same category as environmental protesters. In fact, when the latter commit criminal acts and illegal stunts, they make themselves enemies not only of the legitimate stakeholders who are trying to conduct business professionally and legally, but also of the very environment they purport to defend.

For this reason, it is disturbing that authorities recently dropped 33 charges against DAPL protesters — most of those charges related to criminal trespassing. When the state cannot be expected and trusted to uphold private property rights against hooligans, then what is to prevent the state from eventually trampling these same rights themselves?

The same thing happened a few months ago in Canada. Three women manually shut down Enbridge’s Line 9 pipeline. They faced charges of mischief over $5,000 and mischief endangering life. They also risked facing prison time. The charges were dropped, though, after the women agreed to keep the peace and stay off Enbridge property. They were unremorseful for endangering life, with one of the women telling media, “I knew we did the right thing.”

In February, two protesters had to be removed from Florida’s Sabal Trail pipeline into which both had crawled. In the same area, just one week later, a man fired a rifle at a pipeline under construction. And, that same month, in North Dakota, the last DAPL protesters to leave set fire to the site in a “departure ceremony.” Two children suffered burns from the recklessness. Why media continue to describe these very crimes as “civil disobedience” and “peaceful” is baffling.

When the state via law enforcement fails to enforce the law, politicians and police send the message that activist stunts trump private property rights. The difference between landowners and criminals is, of course, not just a matter of tactics but of fundamental principles.

Moral Hazard
“Moral hazard is a prime example of common-sense economics at work. Being able to impose the costs of your action on others, without their direct consent, provides a powerful incentive to act in ways you normally wouldn’t. A classic case of moral hazard is fire insurance, which reduces the incentive for insured people to avoid fire by imposing certain costs on the insurance company.” — Matthew McCaffrey

All people of good will who understand that property rights are a core tenet of liberal democracy can distinguish between the real stakeholders and obnoxious meddlers. This principle is incumbent upon all of us to defend, even while the actual business negotiations at any given time and for any given project rest strictly and fundamentally with those directly involved.

We can see the stupidity of protesters who reportedly want the "state regulatory process in Nebraska to delay or block the project." The purpose of a regulatory and legal process is for due consideration of all interests and stakeholders, not a circus of stunts and distractions from business negotiations. Such activists would like to make themselves the beneficiaries of bureaucracy. This is how the regulatory regime itself is increasingly becoming anything from a poor substitute for property rights to a downright threat to them.

As socialism makes everyone equally poor, the democratization of stakeholders purports to make everyone equally invested. But this is a fiction. Not everyone has an equal stake in pipeline projects. And the reality is that only the true stakeholders will bear the brunt of the consequences for the risks and decisions of companies and governments.

Professor of Enterprise Matthew McCaffrey explains, “Moral hazard is a prime example of common-sense economics at work. Being able to impose the costs of your action on others, without their direct consent, provides a powerful incentive to act in ways you normally wouldn’t. A classic case of moral hazard is fire insurance, which reduces the incentive for insured people to avoid fire by imposing certain costs on the insurance company.”

When it comes to property rights, we see this structure of moral hazard. When governments invite industry to externalize the costs and consequences of their decisions on landowners and farmers, politicians become far more audacious with others’ property than they would ever be with their own.

This leads us to wonder: If Keystone XL still faces obstruction from activists for a project now enjoying the backing of the White House, how might TransCanada's Energy East fare in Quebec and how might Kinder Morgan's Trans Mountain fare in British Columbia? Will one or both ultimately wind up the same way as Enbridge's Northern Gateway, a project that perished not on its merits but on the efforts of anti-pipeline activism?

Pipeline executives ought to find allies in local landowners through conducting mature, professional, and respectful business negotiations. It is, in fact, a moral responsibility for companies to forego expropriation and resist collaborating with governments in this moral hazard which threatens the common good that property rights have been enshrined to protect. After all, is a well-proven paradox that private property is the best guarantee of a universally free society.

Amanda Achtman is associate director, Public Policy and Communications, with Manitoba Forward. She holds a BA in political science and is currently pursuing an MA in philosophy. She has worked at the Frontier Centre for Public Policy, and participated in seminars on economics hosted by numerous institutes, including: the Acton Institute, Mises Institute, and the Foundation for Economic Education. 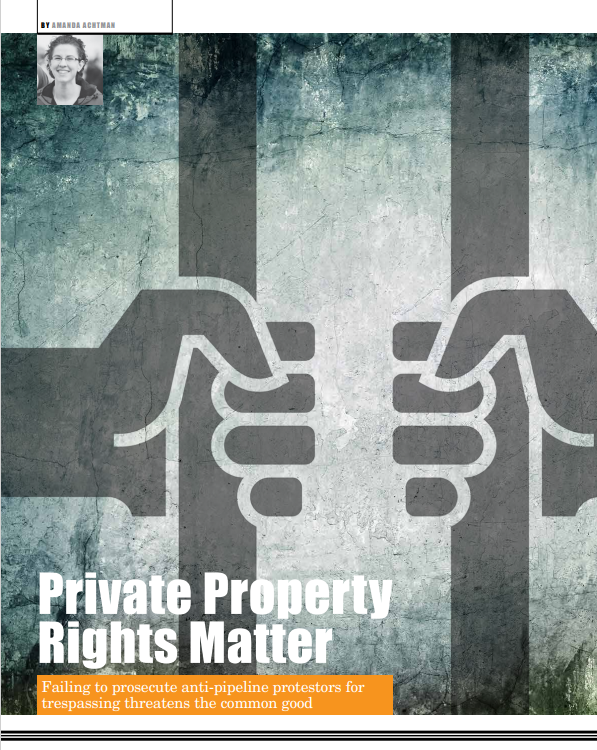 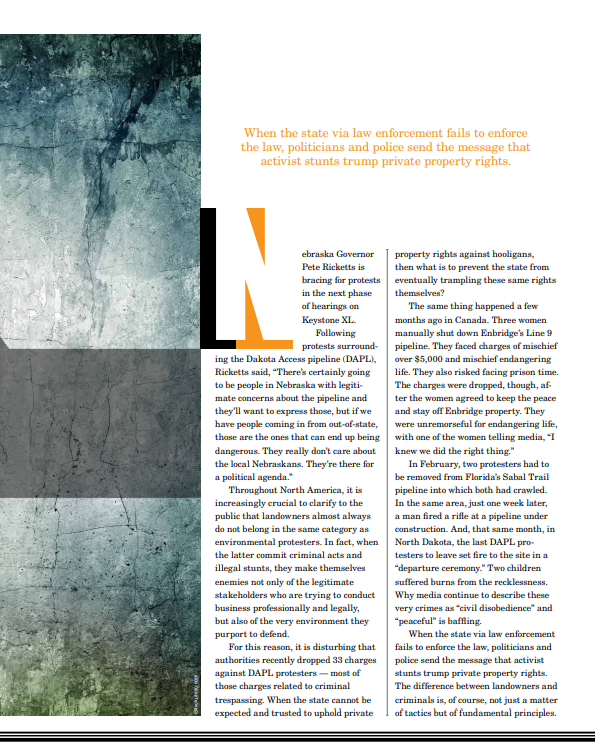