Private Property: Inherent Right or a Gift from Government?

“Canadian statutes allow the government to take property without compensation or for almost any reason.”

Every government has the actual or inherent power to take private land ownership, either under the law or through direct force.

Under the law, a landowner can agree to the terms of the government’s forced conveyance of the land. Or the beneficiary of the expropriation can have parliament enact legal justifications to force the conveyance regardless of the landowner’s consent. In Canada, the legal doctrine is expropriation, while Americans use the term eminent domain.

Expropriation is an ancient doctrine that attempts to balance the government’s duty to protect and promote commerce while simultaneously respecting private property interests that restrain governmental control over those lands.

Depending on where you live, property can be a gift from your government or an inherent right.

Canada and the U.S. have private land ownership that appears coequal, however, the source of the land’s privatization affects a landowner’s legal defences.

In New Zealand and Canada, the Crown owns all the land and it conveyed the land to create private ownership without eliminating the Crown’s underlying control.

Comparatively, the U.S. considers property as an inherent right that existed before the ratification of the federal and state constitutions. No American government has an underlying interest to reclaim dominion of the land, and landowners have a right to request the government to uphold their private interests.

“A landowner may accuse the government of taking land for an improper purpose, but has an onerous burden to prove bad faith.”

When property is not an inherent right, the government has fewer barriers to reclaiming full ownership of land it previously granted to private individuals. For instance, New Zealand has a long history of reverting private land interests to the Crown without paying compensation to the landowners. New Zealand nationalized all petroleum, natural gas, gold, silver and uranium beneath anybody’s land — reverting specific mineral rights back to the Crown.

In Canada, mineral rights were transferred from the federal Crown to the provinces, which could later transfer mineral rights to private individuals. Nevertheless, Alberta and British Columbia have kept most of the mineral rights under government ownership. They have also excluded mineral rights from the expropriation regime and potentially the compensation policy depending on the circumstances.

Although most western constitutions have a right to property, Canada’s Constitution Act, Charter and case law fail to recognize authoritative property rights to restrict government actions.

Although Canadian landowners have federal and provincial rights to compensation at the time their land is taken, Canadian statutes could allow the government to take property interest without compensation or for almost any reason.

Canadian courts declined to create a common-law (case law) right to property to emulate the U.S. The courts also reiterated that it holds no authority to judge the legislative burdens posed to land which could substantially impair property rights. The government must inhibit all reasonable ways to use the property, not merely 50 or 90 per cent of the land’s usefulness, before a court will declare an expropriation as de facto.

A constitutional right to property is not an impenetrable shield against expropriation abuse, but it allows judges to question the validity and severity of statutes authorizing expropriations.

“Land redistribution with the expectation of a positive economic outcome has been accepted worldwide.”

In New Zealand, Canada and Singapore, the governments’ notice to expropriate land is practically conclusive evidence that land is needed for a legitimate purpose. A landowner may accuse the government of taking land for an improper purpose, but has an onerous burden to prove the government’s bad faith or illegitimate actions. For example, the modern trend of expropriating land from one private person to give it to a different private person has not been considered bad faith or an improper purpose.

Land redistribution with the expectation of a positive economic outcome has been accepted worldwide, even in countries with resilient property rights – the U.S. and Switzerland. However, countries with constitutional property rights can have adjudicators questioning the government’s basis for taking the land, which offers landowners an opportunity to defend their land on less onerous legitimacy grounds.

Canada is the second-largest country in the world, with about 11 per cent of the land being privately owned and where 6.5 per cent of the land is agricultural. Despite the proportionally scarce amount of agrarian land, Canada has not recognized a unique legal defence for farmland against expropriation.

Comparatively, in Switzerland, farmland serves a public interest as it secures a food base for the nation’s sustainability, imposing special legal tests on the government’s expropriation plans.

Most countries have not considered farmland as imperative to feeding the country and reducing dependence on imports. These factors have not stopped expropriation activity, even though farmland is irreparable after it is developed with cement foundation buildings.

The world is entering a period of inflation from governments’ COVID-19 spending, and real assets like farmland will offer stability against substantial inflation.

Unfortunately, governments that do not treat property rights as imperative expropriate farmland during tough financial times — possibly because the costs of producing food increase or farmers refuse to work due to punitive taxation or price controls failing to cover rising production costs. As economist Morten Arisson explains:

“Farmers, landowners will always be loathed by democracies because in many ways they can afford to ignore democratic rulers and carry on with a self-sufficient living...At the end, when chaos finally sets in with hyperinflation, those farmers who saved their lives and that of their loved ones by leaving everything behind and migrating to another nation will consider themselves fortunate.”

Parliament’s discretion to compensate for expropriations or to not expropriate frequently does not prevent parliament from changing its policy since “parliament is always correct” under parliamentary supremacy.

Parliament embodies the electorate, and if most voters cannot afford housing or food during unstable times, nationalizing food production or redistributing land for housing purposes becomes politically popular or necessary. These consequences are as ancient as the doctrine of expropriation.

Arisson cites Egypt, France, Argentina, Zimbabwe and colonial New York State as examples where farmland lost its anti-inflationary character due to a legislature’s supreme power to cease respecting property rights. If parliament disallows compensation for expropriations in a statute, the courts may not help since it has not acknowledged a distinct common-law right to compensation from the nation’s historical custom.

Farmland works in food production and as an inflation-hedge only if the government enforces property rights during the worst economic times. Of course, if the rule of law is no longer enforced, there will be greater concerns than the loss of property rights.

Thankfully, Canada has been a stable country for generations, but the underlying property rights framework poses uncertainty for the future sustainability of property laws during unstable times.

Thomas Oriet, Esq., LLM, EA, has law degrees from Canada and the United States. Thomas is a U.S. attorney and legal scholar specializing in asset protection, estate planning and agricultural law at the law offices of Casey D. Conklin. He is a fifth-generation farmer in Essex County. He can be contacted at [email protected] 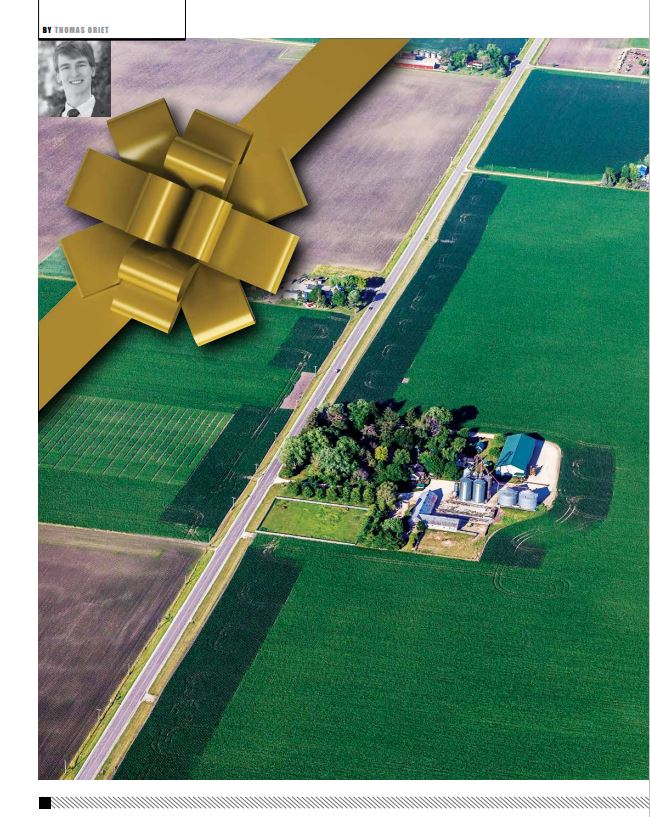 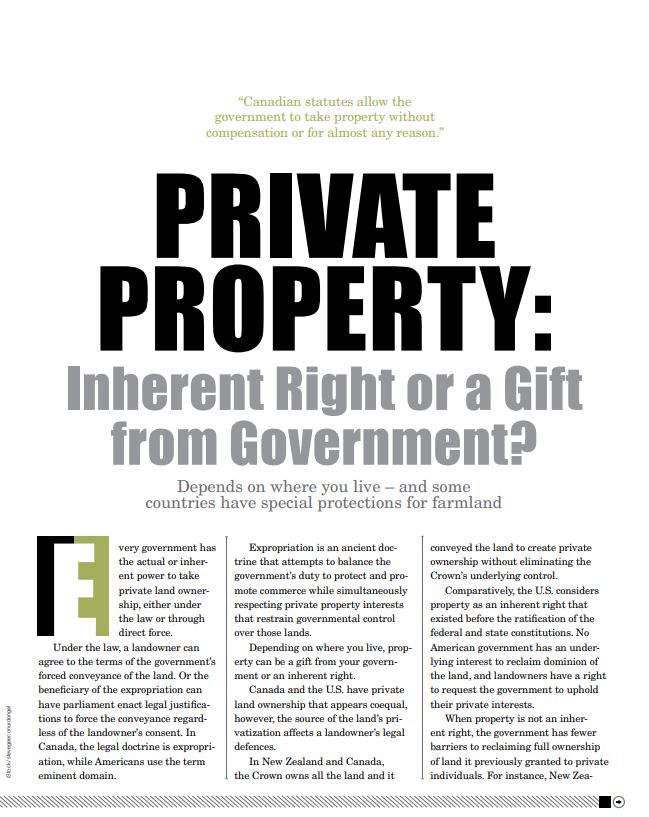 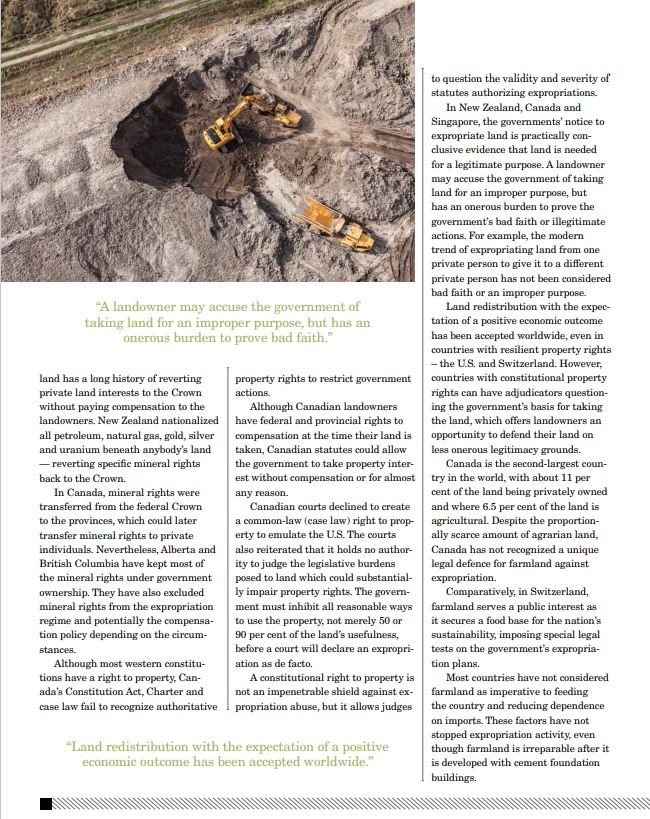 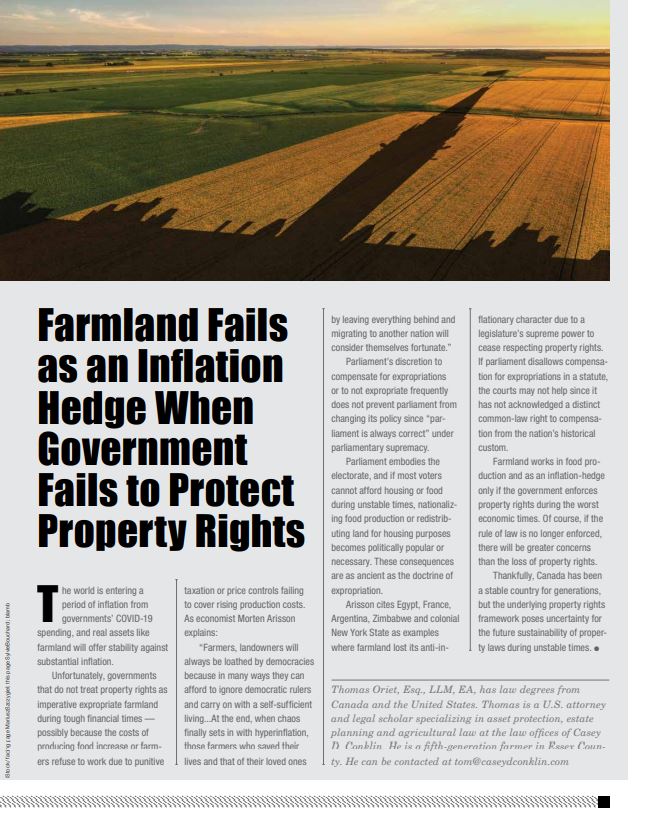