Practising the Law of the Land

John Goudy’s roots pull him back to the land—but these days, he’s working it in a different way.

When he graduated with a law degree in 2004, John Goudy knew he wanted to work in areas related to agriculture. Over the past 15 years, some of the Ontario-based lawyer’s work has been with The Canadian Association of Energy and Pipeline Landowner Associations (CAEPLA), where he has advocated for hundreds of clients across the country.

Goudy’s practice focuses on areas of commercial and environmental litigation, expropriation law, energy regulation and regulatory offences—and he considers his CAEPLA work an important niche to be in.

To say the 41-year-old brings some real understanding to the job wouldn’t be an understatement. On his family’s land in Ontario, there are four Union Gas pipelines and two water pipelines, which carry water from Lake Huron to the nearby city of London.

Goudy’s grandparents, and then his parents, dealt with a variety of pipeline issues over the years, and this taught him that landowners “need to exercise whatever rights they might have.”

Of course, early on, landowners didn’t even know what all of their rights might be. And, though he believes that companies have come a long way since the 1950s, Goudy is also keenly aware of the need to keep them on track—something landowners have often done by leveraging the regulatory system as an ally.

“I think companies have made incremental improvements as time has gone on,” Goudy says. “Companies might be doing [better] voluntarily, but it’s been as a result of landowners being involved.”

Goudy says working with organized groups of landowners brings with it a unique “complexity and difficulty,” as well as challenges that may not appeal to some lawyers.

“If you are working for a company, it is built into the cost of the project, whereas for landowners, it’s not their project and they are in a difficult position to pay a lawyer out-of-pocket for someone else’s project,” he says.

While Goudy never tires of arguing before a judge or an energy board—be it national or provincial—his work isn’t all about those opportunities. “The grunt work you have to do in preparation for that can sometimes be difficult,” he says.

As for his clients, Goudy says they may have similar goals, but they can be very diverse in perspective. The majority of landowner clients—even those with multiple pipelines on their property—have not had many dealings with lawyers, nor have they been involved in a legal dispute.

“Most people—unless they have had experience with this before—don’t know what to expect and don’t know what the real power dynamic is and what rights they have and don’t have. Some people come in feeling very intimidated and are overwhelmed by being presented with a lot of paperwork and information from a company,” he says. “At the same time, there are a lot of people who feel very confident—maybe even overconfident—about their ability to deal with a big company or big project, and they may overestimate their bargaining leverage.”

Ultimately, much of Goudy’s work with CAEPLA comes down to ensuring companies and government are “playing by the rules” rather than browbeating landowners.

“Landowners and the general public, a lot of times, just don’t know what the rules are. I like holding companies and government to account,” he says. “And where they are attempting to use their power and authority—and overstepping their bounds, pushing people around to get a project through—I like holding them in check and ensuring they are playing fair.”

And there are many issues, he points out, that still need addressing. For example, the minimum depth of cover over pipelines must be met, but many companies are voluntarily burying at a depth exceeding those required. More work also needs to be done on issues like pipeline abandonment and decommissioning, Goudy says.

Nevertheless, thanks to the pipeline landowners’ movement, he says, “Companies are dealing with landowners more as business partners as opposed to patsies. There’s more respect for landowners now.”

Goudy approaches his law practice as he does his personal life: with the intention to work hard and be fair.

“As a lawyer, my primary goal is to do a good job for people and to be able to say that I actually improved the situation for someone. Unfortunately, that’s not always possible, but what really guides me in my work is a concern to give people good value for money and accomplish something for them,” he says.

On a personal front, he says family and faith are important. Goudy, his wife and their three children live on a farm located just a few miles away from where his parents reside—and raised him.

“My dad is still very involved in pipeline landowner issues. I think he likes that I’m involved in this,” he says.

While you won’t catch Goudy savouring shop-talk at the dinner table— “I like to avoid talking about it as much as possible”—farming is fair game.

“If I could just be a farmer, I’d just be a farmer,” he says. “Unfortunately, time is not always on my side when I’m trying to run a legal practice and I don’t get to do as much farming as I like to. Cash crop does not pay as much as legal work.” 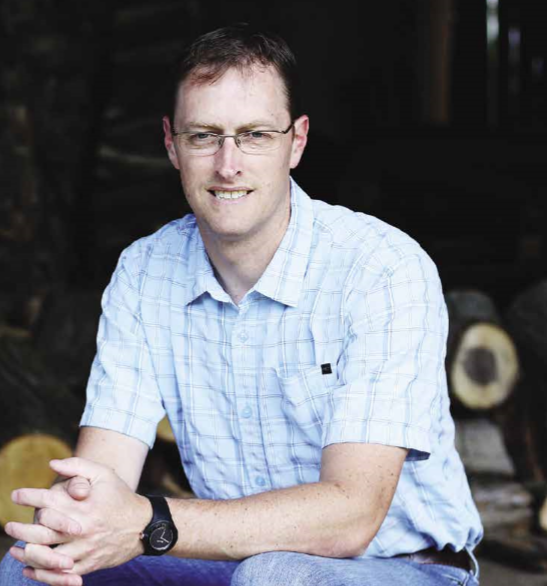