The deal represents an important lesson in how on-the-ground market transactions can flexibly adjust to site-specific conditions, allowing environmental sanity to prevail.

We like to nod sagely at the abstract “value” of water, yet few of us know its actual price.

For reference, in the United States the average cost of the bottled water you toss back at a family barbecue is about a buck-and-half per gallon. On my 215 arable acres [87 hectares] along the San Pedro River of southeastern Arizona, the price is considerably less. In fact, the only “price” I’ve ever tracked is the electric utility’s rate to operate a commercial irrigation pump — around $120 per month, or 0.003 cents per gallon.

Until recently, I couldn’t have even told you how much water I was using. That is, until my family agreed to an irrigation-reduction contract with the Arizona Land and Water Trust. This market transaction has spurred us to conserve water, and represents the first instance of water payments in one of the Southwest’s most ecologically significant riparian areas.

It also demonstrates how information can be discovered through the application of site-specific knowledge. Friedrich Hayek is no doubt nodding in his grave.

Here’s how it happened: My family supplies beef to farmers’ markets and restaurants in Tucson and Phoenix, and we finish our cattle on irrigated land along the San Pedro River. We recently adopted a “no-till” model of pasture management, hoping to establish a base crop of native perennial grasses that would provide year-round forage for our cattle.

We also hoped the change would reduce our water consumption by increasing the soil’s capacity for retaining our limited rainfall. The experiment has paid off — and in some unforeseen ways.

After spending a couple of seasons fiddling with seed drills and 14-way native seed mixes, we discovered that re-establishing native grasses was actually quite simple. By ending the annual tillage and using regenerative grazing practices, we were able to develop a thick sward of native grass that is both beautiful and productive. Nevertheless, even though we were interested in conserving water, we still had no absolute sense of our water consumption or any incentive to economize, since the resource went “un-priced” in any meaningful sense.

Then, a few years ago, the Arizona Land and Water Trust approached us about its privately funded irrigation-offset program. The Trust heard about our work with native grasses and, knowing that we refuse public subsidies, invited us to apply to its Desert Rivers Initiative, which seeks willing farmers to fallow their fields seasonally so that water can be left in-stream to improve riparian conditions.

In exchange, the program pays landowners the equivalent commodity value of the crop they would forego.

We agreed to participate, but with a caveat: Rather than a full fallowing, we proposed an arrangement in which we reduced, rather than ceased, our pumping.

A recent picture in National Geographic, which showed the extent of perennial grass root structure (with root mats 13 feet deep), convinced us of the net positive hydrological gains of well-managed perennial pasture. We wanted our pastures to remain a “sponge” for the riparian zone, rather than become an un-irrigated hardpan that would simply flush water into the river basin.

After experimenting with fallowing the pastures for a full year — which took quite a toll on the native grass — the Trust agreed to alter the contract and extend the payment period over two years of water reduction instead of a full one-year cessation. We now work within a water budget of 135 acre-feet per year, which enables us to use irrigation sparingly to maintain perennial pastures while leaving a significant amount of water in the stream.

This deal represents an important lesson in how on-the-ground market transactions can adjust flexibly to site-specific conditions, allowing environmental sanity to prevail. We now have a deep root base that holds our pastures in a stable matrix, slowly releasing rainfall and irrigation water back into the riparian zone.

And if our experiment in “lightly irrigated” perennial pastures turns out to be wrong, then we have created a dynamic market relationship that can adjust accordingly.

What is striking about our project is its relative simplicity. Although we are managing unimaginably complex ecological systems, our ranch and the Trust were able to spontaneously create a water market, albeit a small one, that strips away much of the underlying complexity. The prices we’ve created are tentative and subject to change — as all prices are — but they represent one of the first voluntary comparisons of relative water values between agricultural producers and environmentally motivated consumers in our region.

Moreover, we are hoping to demonstrate that well-managed landscapes can be a net positive for ecological stability and the provision of environmental goods. With creativity, land management decisions can generate win-win returns.

Price is a noun, not a verb. The challenge, therefore, is not to simply “price” something but to discover what its price is. Rather than imposing prices based on the ordained judgments of central planners — as is often done with environmental resources — markets provide the rough-and-tumble process of price discovery that helps solve Hayek’s “knowledge problem.”

The free-market contracting that we’re experimenting with in the arid Southwest may prove to be the most efficient and the most just way to save the West’s most “priceless” resource. 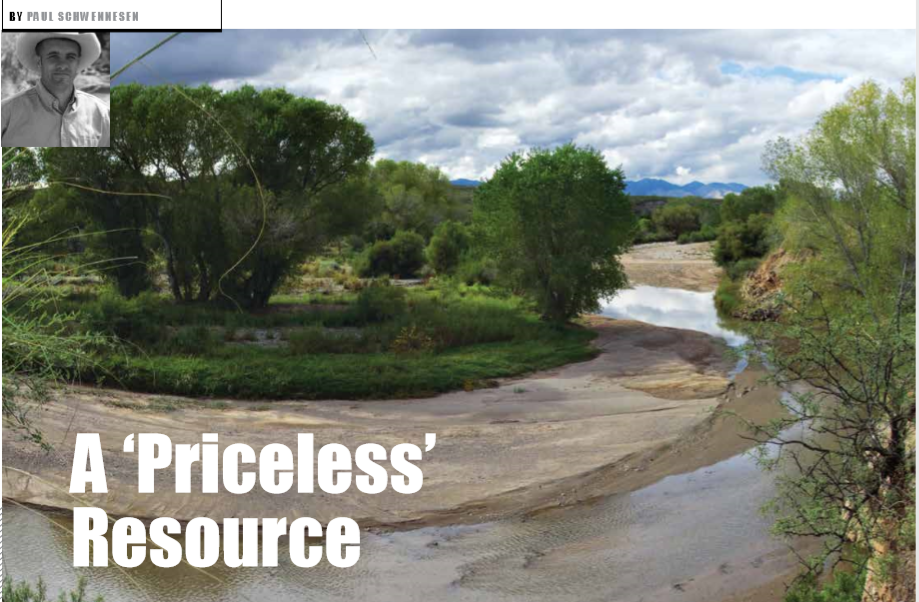 Paul Schwennesen is the owner of Double Check Ranch in Tucson, Ariz. He has written and spoken extensively on free market environmentalism and agricultural policy in venues as disparate as Fox News, American Spectator, The Freeman and The Huffington Post. A captain in the United States Air Force Reserve, Mr. Schwennesen served as a Foreign Area Officer, Maintenance Officer and Acquisitions Program Manager on active duty and served a combat-zone deployment to Afghanistan. He holds a Masters of Liberal Arts in Government from Harvard University and a dual B.S. in History and Science (Biology) from the United States Air Force Academy. This article first appeared in PERC Reports and is reprinted by permission of the Property and Environment Research Center.