“Pedersen has gone from being absent to his constituents to more outright abuses of power and violations of ethical standards.”

Two years ago, MLA Blaine Pedersen rose in the Legislature and said, “I continue to be dismayed by this NDP government’s callous, arrogant attitude toward our family farm operations. The premier and his cabinet, by stealth, ordered Manitoba Hydro to expropriate valuable, food-producing land across Manitoba from hard-working Manitoba farm families without notice.”

But ever since Pedersen’s Progressive Conservative party formed government in April 2016, it seems that he has ceased being dismayed.

Once upon a time, it was Pedersen who forged alliances between landowners and farmers, acting as the staunchest advocate of their interests. And when the NDP was in power, he condemned them for “the constant harassment and bullying of landowners [and for] trying to get them to sign an inferior easement agreement leaving all the risk and liability with the landowners.”

Back in February, the Manitoba Bipole Landowner Committee (MBLC) published an open letter asking: “How can Manitobans trust a premier and a cabinet minister who campaign for property rights in Opposition and then violate them in power?”

The letter lamented unanswered calls and emails from a citizen coalition that had supported him because of their confidence that he would defend their property rights and freedom of association against encroachments by Manitoba Hydro. After all, Blaine Pedersen cofounded the Landowner Committee he decided to ignore once in office.

Unfortunately, Pedersen has gone from being absent to his constituents to more outright abuses of power and violations of ethical standards. And disappointingly, both Premier Brian Pallister and MLA Pedersen are failing to listen to Manitobans, just like their NDP predecessors.

“Hydro has signed billions worth of money-losing export agreements that continue to enrage Manitobans whose land has been expropriated and who have not been treated as business partners in negotiations.”

The crux of the issue is the Bipole III transmission line intended to transport electricity from the Keeyask generating station. Manitoba Hydro has signed billion-dollar contracts related to these electricity projects that are now delayed, vastly over budget and continue to enrage Manitobans whose land has been expropriated and who have not been treated as business partners in negotiations.

Reportedly, more than 100 farm families have had their land expropriated by the province in their ridiculous money-losing power export schemes. Citizens have gotten rotten deals from government, regardless of the political party in power.

Having campaigned on reversing the reckless decisions of the NDP, the PCs are continually pointing fingers and blaming the NDP for having made mistakes they claim are “impossible” to fix at this point.

Since Manitoba Hydro is a Crown corporation, or a state-owned enterprise, the state seems adamant to defend every disastrous outcome of their cooperative mismanagement of the province’s utility. The latest fiscal report estimates its long-term debt will be an outrageous $16.1 billion, which undeniably corresponds to higher electricity costs for every Manitoban family, business, school and hospital.

Graham Lane of the citizen group Manitoba Forward has asked how Hydro and the Public Utilities Board can repeatedly fail to take responsibility for this mismanagement affecting the entire province. He has asked how citizens can abide the lack of a public inquiry into so much recklessness and an utter lack of proper market competition. And he has asked why the Opposition is silent and why Manitobans tolerate the turfing of MLA Steven Fletcher out of caucus—the one MLA who had the courage to challenge the status quo and to table a conflict-of-interest bill, which his erstwhile caucus colleagues defeated.

This is no way to be competitive. This is the path to mediocrity and it threatens an exodus of young people, skilled workers and upstart companies. Is anyone concerned?

Manitoba Forward has also raised the alarm that Pedersen is specifically working to defend his own brothers against the province’s rotten deals after having ignored the same plight of non-family members who he was elected to represent.

If Manitoba Hydro were a private company instead of a government monopoly, shareholders would be furious. Not only would the rogue utility lose the protection of government, no shareholder would tolerate the destruction of the company’s public relations.

Accordingly, taxpayers should be furious at this mess in which politicians and Hydro officials have implicated them. From property rights violations, to silencing both citizen and politician opposition, to conflicts of interest, to endless blame-laying, excuses and denial, Manitobans face an uphill battle against their government's incompetence. Now, who is going to show up for it?

Amanda Achtman is associate director, Public Policy and Communications, with Manitoba Forward. She holds a BA in political science and is currently pursuing an MA in philosophy. She has worked at the Frontier Centre for Public Policy, and participated in seminars on economics hosted by numerous institutes, including: the Acton Institute, Mises Institute, and the Foundation for Economic Education. 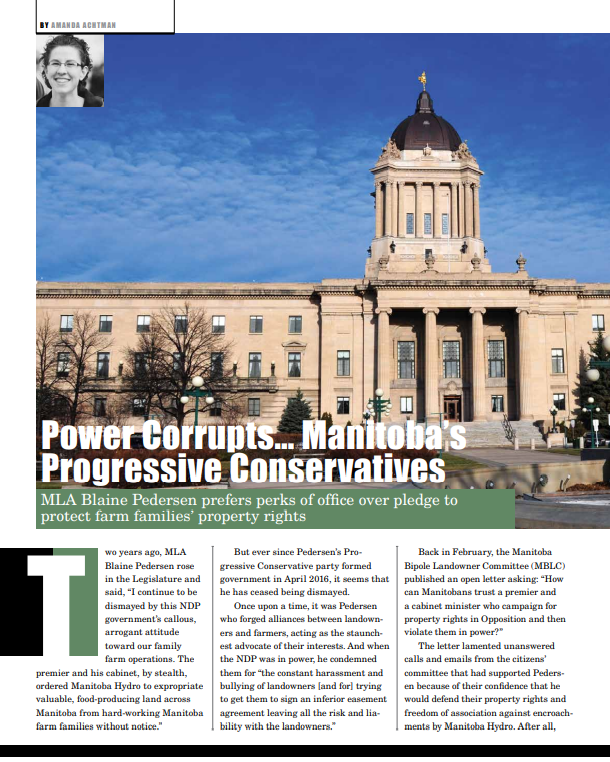 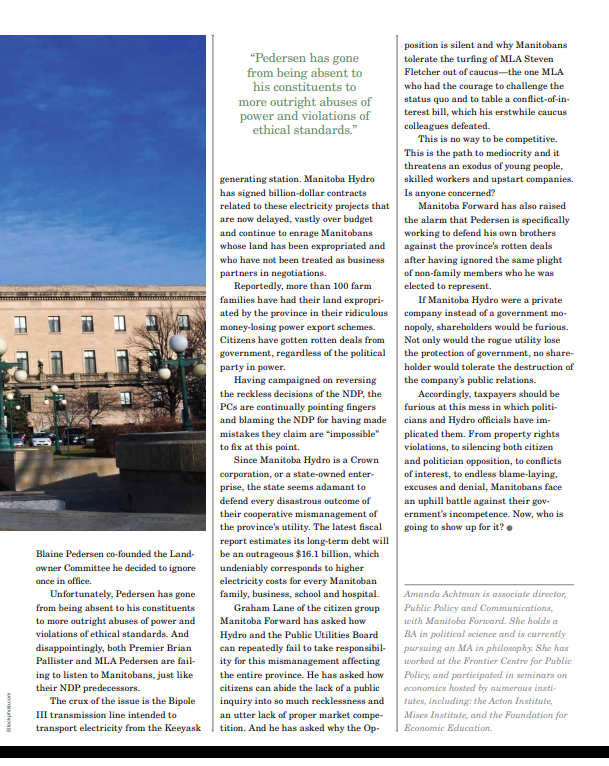