The choice is pretty clear for this Indigenous entrepreneur and activist

“Right now, we are in a battle for our own oil and gas industry. I think what CAEPLA is doing is extraordinary.” ~Dale Swampy

Partnerships between Indigenous Peoples and the oil and gas industry could allow impoverished communities to pull themselves out of the welfare state that has crippled so many across this country.

And Dale Swampy, head of the National Coalition of Chiefs (NCC,) speaks about this opportunity with passion and purpose.

The NCC’s plan for Indigenous communities to continue to come together and develop critical partnerships is believed to be a way out and up from demons long dragging them down.

“Yes, we have problems but with help we could become productive people,” Swampy says. “We need industry on our side.”

The NCC’s pro-development stance promotes bringing oil and gas projects into their communities believing it will translate into jobs and opportunities like training, to in Swampy’s words, help “members thrive and defeat on-reserve poverty.”

The stance is also a collective push for communities to have stakes in oil and gas projects and currently a demand that the feds stop Bill C-48 and Bill C-69—legislation that will make it even more difficult for investors, including First Nations communities, to get projects like pipelines built.

Swampy, who is from Samson Cree Nation in Maskwacis, Alberta (formerly Hobbema) lost his father at a young age and as alcoholism gripped his mother (now a community elder), Swampy and his siblings were sent to relatives to be raised.

A father of eight, Swampy has 21 grandchildren, and comes from a tightknit family, with an estimated 600 Swampys in Canada.

The Swampy family has suffered much tragedy stemming from living in social-welfare states and he has been front-row to the devastation facing many in Indigenous communities.

“I have uncles who have shot themselves, drank themselves to death and died so young,” he says.

“They can’t manage their own welfare cheque—they just can’t feed their children, they have no jobs,” Swampy says.

“It’s not a normal life—all the drug and alcohol abuse, the depression and suicides,” says Swampy. “You have to go out there and make a living…a lot of good things can happen.”

The pain of those shared and ongoing atrocities has bonded members of the NCC who see part of the solution rooted in building confidence among those disenfranchised, creating employment opportunities and, importantly, retention and a return to “anchor families” on the home front to hold it all together.

“The [NCC] coalition is not an arm of the industry—we are trying to build partnerships,” Swampy says.

The goal is not just receiving royalties from oil and gas companies, he says, but ownership of assets which deliver.

Swampy has seen the power of partnerships between on-reserve and outside groups.

In the early ‘90s, he was working with his band when a meat packing plant in Red Deer was looking for labour to support its expansion. The band agreed to pay half the salary of its workers and provide transportation to the plant for six months.

“In the end, some forty families moved to Red Deer and we still have 20 workers from Maskwacis there,” Swampy says. “Programs like that really changes peoples’ lives. That’s a success story.”

Workplace training for band members is one thing, but retention is another aspect that NCC hopes to improve.

“Our greatest failure is companies don’t understand we are refugees in our own country,” he says. “When a young man goes into town he is going into a different country and can’t cope with the transition.”

But the option of not working just isn’t one, he says.

“They end up doing drugs or drinking to get some level of happiness they can’t get from work because they don’t have a job,” he says.

“We are wanting to end Indigenous poverty and grow the economy.” –Dale Swampy

While Swampy says he left his community more than a decade ago “and never looked back,” it’s clear he has not forgotten those left behind—especially those in the clutches of poverty.

After graduating with an economics degree, he worked on Samson for 22 years—his last job was as band CEO.

“I’m pretty familiar with what happens in our community,” he says.

While Samson Cree Nation is one of the country’s richest—with close to a billion dollars in assets and 28 corporations—but it also deals with its fair share social welfare issues.

In 2004, Swampy was offered to work as a consultant on Indigenous pipeline projects for Enbridge. He worked on the Alberta Clipper and the Northern Gateway projects.

The accomplishments were unprecedented, he says, the project showing the power and influence they could have as a group going from 10 per cent to 33 per cent equity ownership.

When the Justin Trudeau government cancelled the Northern Gateway project in 2016—choosing to back the now nationalized TransMountain expansion project instead—it was devastating.

It was also impetus for formation of the NCC.

For Indigenous communities it was a loss of 30 years of return on investments, about $2 billion in benefits and countless opportunities.

It could have been a loss of hope, but instead the equity partners kept up regular conference calls and are contemplating a lawsuit against the feds for the cancellation.

The NCC hosts a conference in Calgary from May 6 - 8 and Swampy is excited about it given the success of one in November which exceeded expectations and saw chiefs from Ontario, Manitoba, Alberta, B.C. and the Yukon and industry officials discuss common ground.

He makes it clear the chiefs, Metis leaders and industry partners all share common ground, they are there for business and to publicly support oil and gas and mining and resource industries.

“We haven’t gone out and fought as aggressively as environmentalists, but we have to start to get the word out there—there are a lot of First Nations people who work in the natural resources industry,” says Swampy.

While he agrees there is a climate problem and imperative there be a shift towards sustainable development - an “uncompromising protection of the environment” [in the words of the government] is not viable option.

The hope is to see Indigenous communities be progressive and create partnerships which leverage advantages rather than sitting by and “listening to David Suzuki”-type rhetoric.

He hopes the organization increases its voice and registers as witnesses on federal bills, even sharing a witness stand to speak up against industry-paralyzing Bills C-48 and C-69.

“It would be good to be side-by-side. It shows on reserve and off reserve can be organized with the same views and fight the same battle,” he says.

While much of Swampy’s family history is coloured with tragedy, he does find strength in the successes.

His own children have transitioned to the workforce but Swampy is pained that problems still facing Indigenous communities across Canada.

He remembers when his grandfather raised horses, selling urine to the pharmaceutical industry and his grandmother supported the family working as a janitor at a residential school.

His grandparents didn’t have running water, used an outhouse and the only floor they had was in the kitchen while the rest of the house was filled with bunkbeds for the children.

“I think about all their struggles,” he says. “They came through it and were happy. The family structure was there.”

That supportive structure is missing for so many today—including many in Swampy’s extended family.

“They are killing themselves every day and every year, young girls and young boys are hanging themselves. There is drugs and alcohol and shooting deaths and domestic violence,” he says.

“We are looking for partnerships with the industry to get band members employed.”

“Positioning First Nations as industry partners would help address social despair,” says Swampy. “Which has meant everything from missing and murdered women to addictions, violence and hopelessness.” 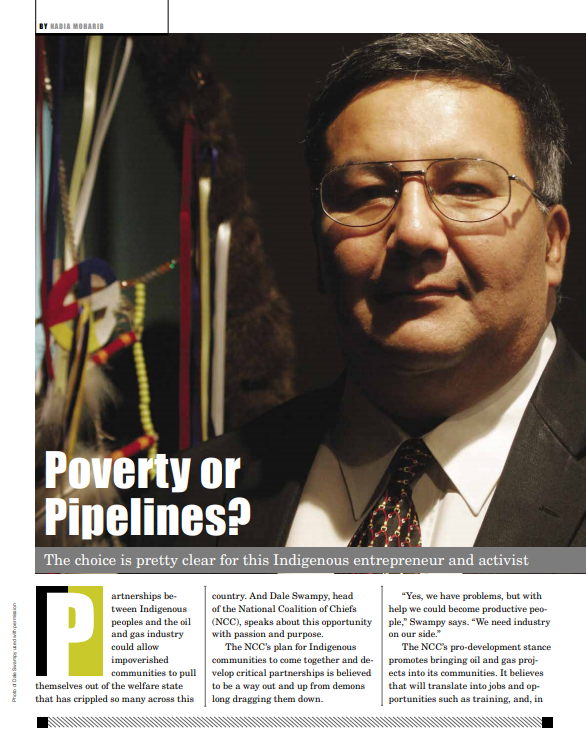 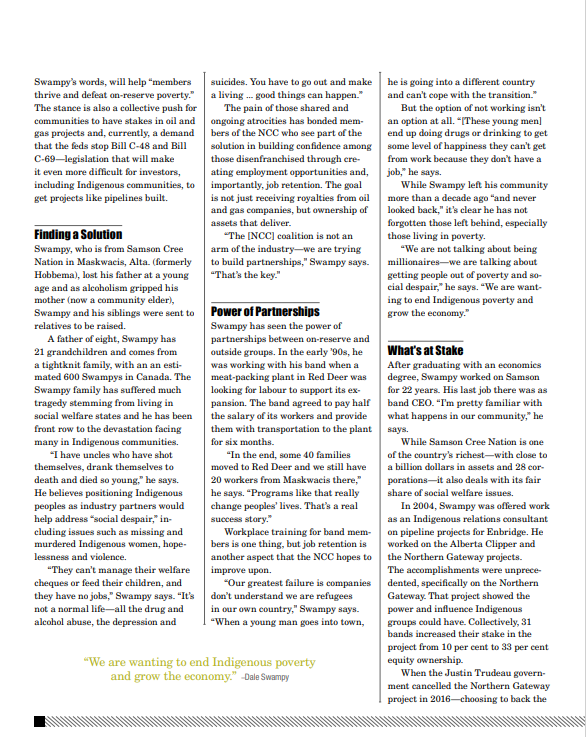 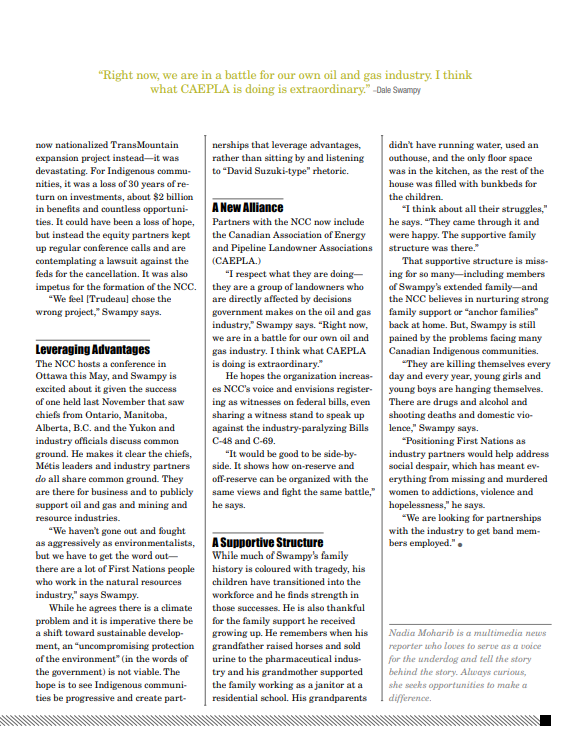