The Manitoba Pipeline Landowners Association (MPLA), a member association of CAEPLA, recently wrote to the Province of Manitoba to express its concerns about the “pipeline plug-in” included in the Municipal Planning Guide to Zoning Bylaws in Manitoba. The plug-in is ready-made language that can be inserted by local and regional planning authorities into zoning bylaws.

If adopted by a planning authority, Manitoba’s model zoning plug-in for pipelines would prohibit development “within 200 metres (650 feet) of the centre line of a pipeline unless a proximity agreement has been signed between the pipeline operator and the landowner that waives or reduces this requirement.”

Like many other landowners across Canada, MPLA landowners have entered into easement agreements for the pipelines located on their properties. These agreements grant pipeline operators the rights required for the construction, operation and maintenance of the pipelines, but otherwise reserve to the landowner the use of their property subject only to specified restrictions and notice requirements.

“Agreements between a company and landowners do not limit the activities that can be carried out by the landowner outside of the easement strip, including development activities.”

The pipeline plug-in as currently written effectively rewrites agreements between pipeline operators and landowners by giving operators a right to prohibit development within a large area outside of pipeline easements. When adopted in a zoning bylaw, the plug-in language empowers pipeline operators to extract concessions from landowners in exchange for permission to build structures within an area of up to 400 metres (1,300 feet) in width. As stated by MPLA in its recent communication to Manitoba’s planning officials, “Granting this authority to pipeline operators is patently unfair.”

Manitoba’s pipeline plug-in was apparently based on a 2004 document produced by the Canadian Standards Association (CSA) called Land Use Planning for Pipelines: A Guideline for Local Authorities, Developers and Pipeline Operators. The CSA has since replaced the 2004 document with the new CSA standard Z663-18: Land Use Planning in the Vicinity of Pipeline Systems.

Neither CSA document makes reference to a prohibition on development in the vicinity of pipelines or to a requirement for proximity agreements. Instead, the documents call for local and regional planning authorities to impose requirements to give notice to nearby pipeline operators about proposed developments.

The pipeline plug-in goes far beyond imposing the requirement to give notice to a pipeline operator about a proposed development. The plug-in requires landowners to enter into a new written agreement with a pipeline operator — an agreement that the operator is under no obligation to make. In that sense, a municipality or planning district that adopts the plugin is abdicating its planning authority. It's taking the power to make decisions out of the hands of duly elected officials and entrusting it to pipeline operators, often private entities motivated by profit.

Would a pipeline landowner have any recourse where a pipeline operator refused to grant permission for a development within the restricted zone identified in a zoning bylaw based on the plug-in language?

MPLA has asked Manitoba to remove the pipeline plug-in from its guide, but the elimination of the plugin alone may not end the threat of development prohibitions and requirements for proximity agreements.

“Would a pipeline landowner have any recourse where a pipeline operator refused to grant permission for a development within the restricted zone identified in a zoning bylaw based on the plug-in language?”

While on the surface the CSA documents promote notification to pipeline operators, there is reason to be concerned they could be used by the CSA and the pipeline industry to shift responsibility for (and cost of) pipelines from operators to landowners. For instance, the CSA has hinted that the next version of standard Z663-18 may include “long range planning for future pipelines,” which sounds a lot like a development exclusion zone around existing pipelines to ensure future pipelines can be accommodated. This could result in an enlargement of pipeline easements without compensation to landowners.

Pipeline landowners cannot afford to ignore the discussions going on behind the scenes between some would-be industry participants, the CSA and municipal and provincial planning officials.

As shown in the Manitoba pipeline plug-in, pipeline landowners are only a zoning bylaw amendment away from a requirement to obtain proximity agreements from pipeline operators over and above the easement agreements that are already in place. 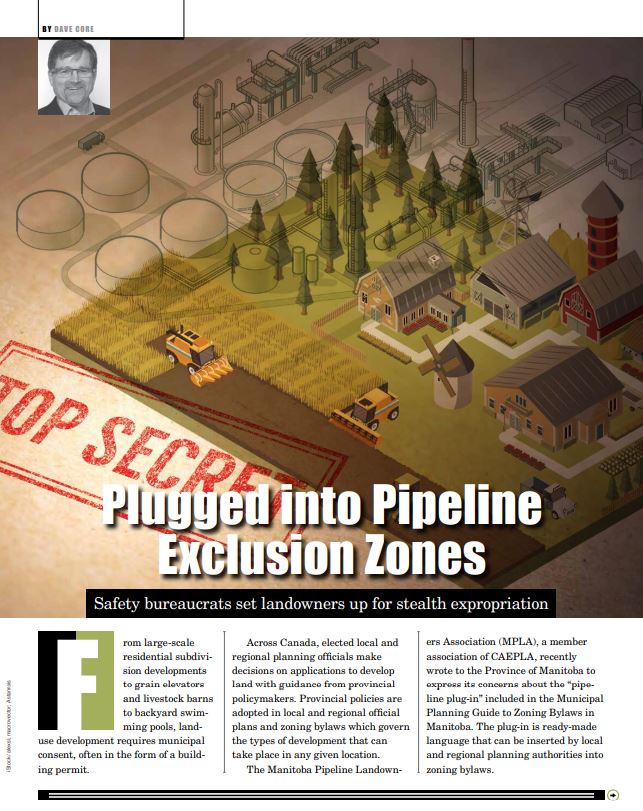 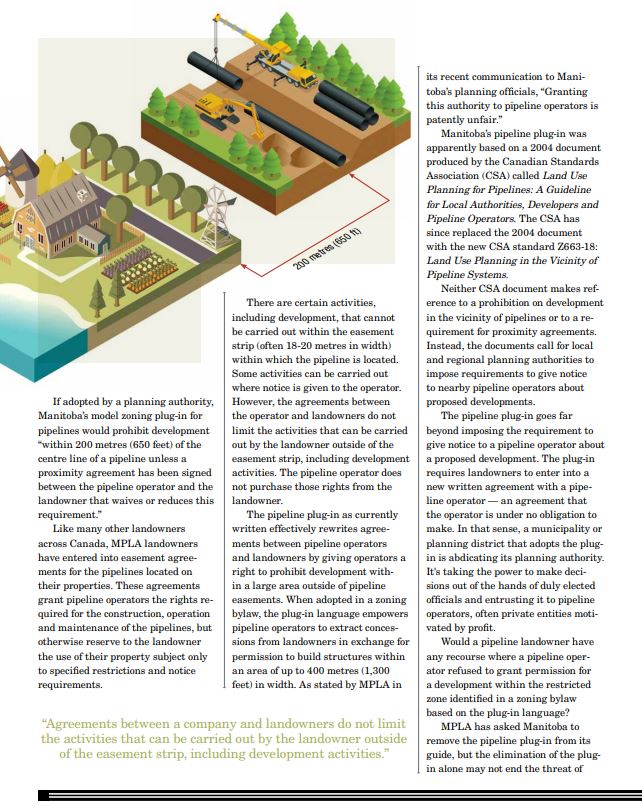 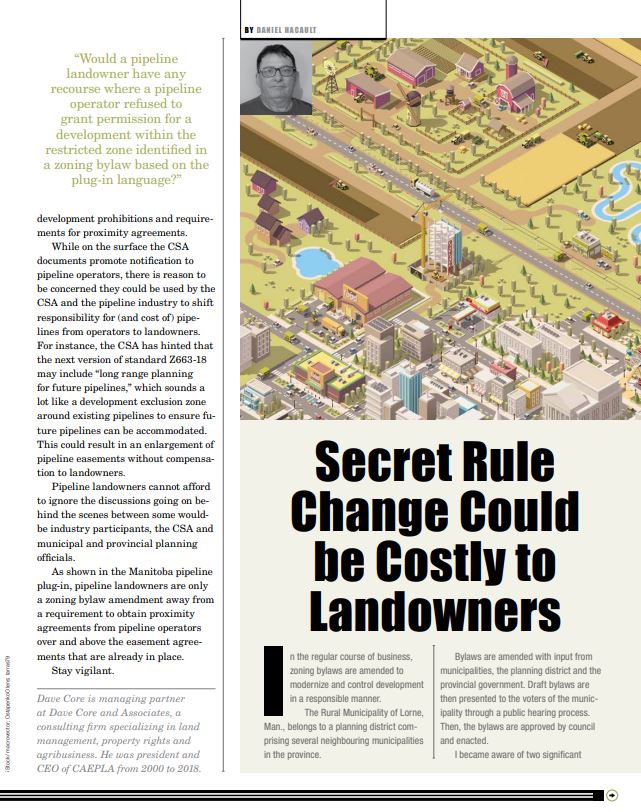 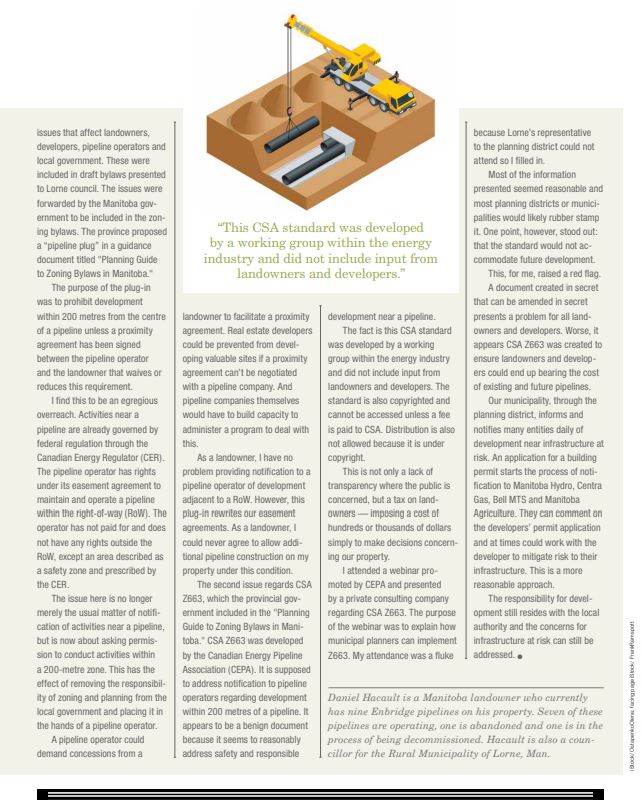 Secret Rule Change Could be Costly to Landowners

In the regular course of business, zoning bylaws are amended to modernize and control development in a responsible manner.

The Rural Municipality of Lorne, Man., belongs to a planning district comprising several neighbouring municipalities in the province.

Bylaws are amended with input from municipalities, the planning district and the provincial government. Draft bylaws are then presented to the voters of the municipality through a public hearing process. Then, the bylaws are approved by council and enacted.

I became aware of two significant issues that affect landowners, developers, pipeline operators and local government. These were included in draft bylaws presented to Lorne council. The issues were forwarded by the Manitoba government to be included in the zoning bylaws. The province proposed a “pipeline plug” in a guidance document titled "Planning Guide to Zoning Bylaws in Manitoba."

The purpose of the plug-in was to prohibit development within 200 metres from the centre of a pipeline unless a proximity agreement has been signed between the pipeline operator and the landowner that waives or reduces this requirement.

I find this to be an egregious overreach. Activities near a pipeline are already governed by federal regulation through the Canadian Energy Regulator (CER). The pipeline operator has rights under its easement agreement to maintain and operate a pipeline within the right-of-way (RoW). The operator has not paid for and does not have any rights outside the RoW, except an area described as a safety zone and prescribed by the CER.

The issue here is no longer merely the usual matter of notification of activities near a pipeline, but is now about asking permission to conduct activities within a 200-metre zone. This has the effect of removing the responsibility of zoning and planning from the local government and placing it in the hands of a pipeline operator.

“This CSA standard was developed by a working group within the energy industry and did not include input from landowners and developers.”

As a landowner, I have no problem providing notification to a pipeline operator of development adjacent to a RoW. However, this plug-in rewrites our easement agreements. As a landowner, I could never agree to allow additional pipeline construction on my property under this condition.

The second issue regards CSA Z663, which the provincial government included in the "Planning Guide to Zoning Bylaws in Manitoba." CSA Z663 was developed by the Canadian Energy Pipeline Association (CEPA). It is supposed to address notification to pipeline operators regarding development within 200 metres of a pipeline.

It appears to be a benign document because it seems to reasonably address safety and responsible development near a pipeline. The fact is this CSA standard was developed by a working group within the energy industry and did not include input from landowners and developers. The standard is also copyrighted and cannot be accessed unless a fee is paid to CSA. Distribution is also not allowed because it is under copyright.

This is not only a lack of transparency where the public is concerned, but a tax on landowners — imposing a cost of hundreds or thousands of dollars simply to make decisions concerning our property.

I attended a webinar promoted by CEPA and presented by a private consulting company regarding CSA Z663. The purpose of the webinar was to explain how municipal planners can implement Z663. My attendance was a fluke because Lorne’s representative to the planning district could not attend so I filled in.

Most of the information presented seemed reasonable and most planning districts or municipalities would likely rubber stamp it. One point, however, stood out: that the standard would not accommodate future development.

Our municipality, through the planning district, informs and notifies many entities daily of development near infrastructure at risk. An application for a building permit starts the process of notification to Manitoba Hydro, Centra Gas, Bell MTS and Manitoba Agriculture. They can comment on the developers’ permit application and at times could work with the developer to mitigate risk to their infrastructure. This is a more reasonable approach.

The responsibility for development still resides with the local authority and the concerns for infrastructure at risk can still be addressed.

Daniel Hacault is a Manitoba landowner who currently has nine Enbridge pipelines on his property. Seven of these pipelines are operating, one is abandoned and one is in the process of being decommissioned. Hacault is also a councillor for the Rural Municipality of Lorne, Man.