Piping Up For Technology

How Enbridge is tapping technology to heighten safety on its systems

"We want to stay a step ahead of the industry by using technology to intervene—to have some advance warning before the pipe is hit."

Innovation never stands still—there’s always a new advancement coming down the pipe. Enbridge is constantly testing commercially available technologies and looking for opportunities to enhance existing technologies in the areas of design, prevention, monitoring and leak detection, to keep its pipelines safe.

Enbridge is engaged in ways to adapt and harness technology for safety’s sake. These proactive investments in innovation are intended to add another layer of safety and security to its pipeline network—and ultimately, to the energy transportation industry as a whole.

People don’t always know what’s below. That’s why Enbridge wants to be aware of what’s going on beneath the surface.

Even with Enbridge’s robust Call 811 and Call/Click Before You Dig public awareness campaigns, the most common source of natural-gas pipeline damage is accidental third-party strikes. “Within our Enbridge Gas Distribution system alone, we have more than 82,000 kilometers of natural-gas pipelines,” says David Furdas, a senior engineer and project manager with Enbridge Gas Distribution, which serves more than two million residential, commercial and industrial customers in central and eastern Ontario. “We want to stay a step ahead of the industry by using technology to intervene—to have some advance warning before the pipe is hit.”

Since 2014, Enbridge Gas has been working with NYSEARCH, a collaborative research-and-development organization representing 25 natural gas utilities, on a right-of-way intrusion detection project that employs the most sophisticated commercially available technologies, based on experience and research.

“It’s all based on motion or vibration in the ground. The fibre optic cable itself is a sensor, where pulsed light is sent down the fiber. Say, for example, a third party hasn’t called in for locates, we have a pipeline in the immediate area, and they’re mobilizing and getting ready to start digging,” Furdas says.

“The system has the capability of detecting that sort of activity through changes in the reflected light patterns, and triggers an alarm. Before the backhoe bucket even hits the ground, we can potentially receive the alarm and dispatch someone, or intervene by some other means,” he says.

Based on last fall’s results, which are currently being closely scrutinized, additional testing may be recommended, says Dave Merte, a senior project manager at NYSEARCH. The Enbridge project team expects to be able to recommend a damage prevention technology for Enbridge’s rights-of-way by mid-2016—for potential application on Enbridge’s crude oil network as well as its gas pipelines.

“The project is broad-scoped, and any potential solution could be used company-wide,” says Furdas. “The technology appears to be suited to liquids pipelines as much as it is to gas pipelines.”

For more stories on how Enbridge is tapping technology to heighten safety on its system, check out the company’s series Piping Up For Technology at Enbridge.com 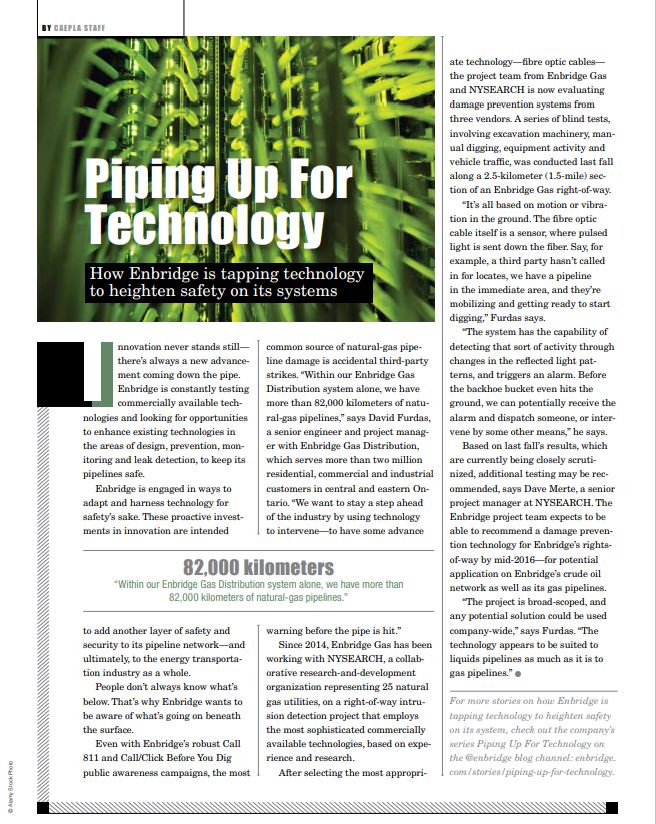