Negotiations in good faith, without government intervention, will benefit everyone

While the “shale gale” has greatly increased North American energy supplies, it also has been a boon to the legal profession. Lawyers for energy companies and landowners have filed suits in several states and provinces, including Virginia, West Virginia, Nebraska, Michigan, Quebec and Alberta, over fracking and the proposed routes of new pipelines.

In some cases, landowners have held protests, brandished firearms and refused to allow pipeline surveyors to come onto their property in violation of state law. John DeVries, who has represented about 20 pipelines during the past 40 years, went so far as to declare, “This is the first time, on one pipeline project of many that I’ve worked on, where surveyor permission has been denied.”

"Some landowners, emboldened by the environmental left, appear to have joined the anti-fossil-fuel crusade in spirit, if not in theory. One wonders what might come next: payments from environmentalists to landowners to obstruct?"

Part of this conflict is pent-up opposition to eminent domain law (expropriation in Canada), which allows the pipeline to file for condemnation (right of way) should the landowner refuse its final offer of payment for the right to use his or her property for the public purpose. Such resort engenders ill will, making a case for legal liberalization to create true free market transactions.

Technology, too, could come to the rescue where underground boring can bypass surface access entirely — a subject for another day.

But something else is at work. Some landowners, emboldened by the environmental left, appear to have joined the anti-fossil-fuel crusade in spirit, if not in theory. One wonders what might come next: payments from environmentalists to landowners to obstruct?

Meanwhile, demand for energy — and the infrastructure behind it — is growing. The Census Bureau projects the U.S. population could increase 40 per cent to approximately 450 million by 2050, depending on immigration policies. According to the National Oceanic and Atmospheric Administration, more Americans are moving to the coasts, which are home to around 40 per cent of the population.

U.S. shale energy, however, is being produced in the country’s midsection, requiring fuel to be transported from where it is produced to where it is needed. Whether it is for vehicles or electricity, it requires transportation by pipelines, power lines, barges, trains or trucks.

The White House acknowledges the importance of energy transportation and has announced a program to modernize and expand energy infrastructure. This multi-billion-dollar plan is expected to increase employment in energy transportation from a million jobs in 2013 to 2.5 million in the transmission, distribution and storage sectors in the energy industry.

But at the same time, the administration is expected to announce carbon-emission regulations this summer that will close dozens of coal-fired power plants. A study by the Institute for Energy Research (where I am CEO) found the proposed regulations could reduce the nation’s electricity by up to 130 gigawatts, which is enough to meet the residential needs of one-third of the U.S. population.

That lost power will have to be replaced. Although wind power has tripled and solar power has grown 20-fold since 2008, they won’t be able to do it alone. They generate electricity only intermittently — when the wind blows and the sun shines — and require backup power generation, fueled by coal or natural gas, to supplement their contributions to the grid.

The continuing need for coal, natural gas and oil is anathema to environmentalists like the Sierra Club. In their quixotic quest to “save the planet,” fossil fuels must stay in the ground, not to be produced, transported or refined. Thus energy infrastructure must be thwarted — and particularly the construction of pipelines.

Both groups are working with landowners in Virginia who claim the Atlantic Coast natural gas pipeline will pollute the water, destroy the community’s heritage and not provide any benefits to those in the pipeline’s path. A study by ICF International refutes that claim, indicating that Virginia and North Carolina residents would save about $377 million annually in lower electricity costs from more gas-fired generation.

Everyone, including environmentalists, needs reliable and affordable electricity to turn on the lights, produce heat for homes and businesses and power the communications devices that keep us connected. The masses must also have fuels for the conveyances that move people as well as goods and services.

It’s understandable that landowners might object to having a construction project on their property. Negotiations must ensue in good faith between buyer and seller with less intrusion from both government and fossil-fuel enemies. Without eminent domain expropriation law, pipelines will have to get started sooner and employ neighbourly practices.

Reliable, affordable, domestic energies, from heating oil to electricity, require more pipelines and transmission systems to be built — and sooner rather than later. That will require new ways of doing business in place of the easy out of expropriation law and regulatory hearings. Mutual respect and cooperation, and market remuneration for rights-of-way, point the way forward.

— Robert L. Bradley Jr. is CEO of the Institute for Energy Research and author of numerous books on energy history and public policy. 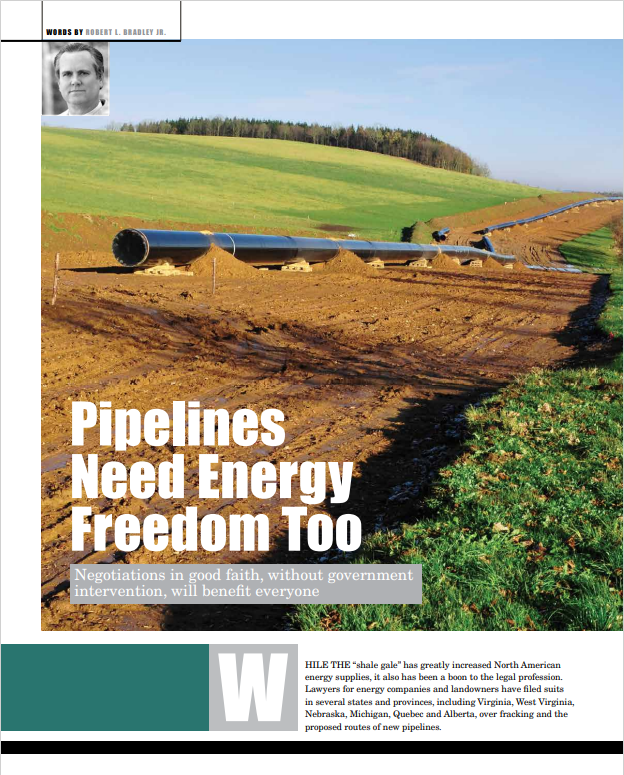 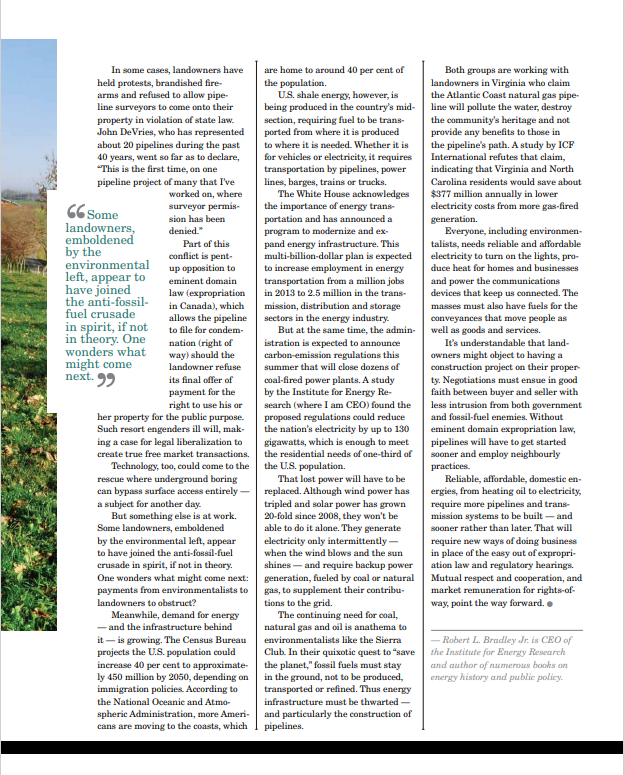