Pipeline Safety, One Step at a Time

The value of walking softly and carrying a great app.

“Our pedestrian approach to the work paid off. One benefit was being able to interact with landowners in a human way, rather than being considered invaders.”

How do you make sure that a 623-kilometre stretch of high-pressure liquid petroleum pipeline is safe? You walk its entire length.

This is exactly what we did in the summer of 2019 to help our client, Enbridge Inc., meet federal laws intended to protect public safety through regular inspections of pipelines. This includes checking if the pipeline has appropriate depth of cover, to be performed about once every 10 years.

Another federal requirement is to ensure that the pipeline Right of Way (RoW) markers are in place, visible and in good condition — to be checked about every four years. These signs are generally concentrated at critical areas, including road and railway crossings, as well as at watercourses.

At stake is the issue of public safety, but also public service — this 30-inch line is a vital link for keeping the wheels of industry, as well as society as a whole, turning.

A farmer’s plough or an excavator’s backhoe causing a pipeline rupture would be a safety hazard for that person, as well as creating consequences for the public through a risk to our energy supply.

Our role at PVS Contractors, as utility location specialists, was to carry out both depth-of-cover and signage inspections of what Enbridge refers to as Line Nine. Our assignment covered the distance from near Hamilton to near Montreal. This included taking a variety of information every 50 metres — sometimes just the location using GPS, and in other cases testing the depth of cover, as well as checking RoW signage.

Any places found to have inadequate cover — generally about a metre — would be noted and Enbridge would send a crew to take steps such as backfilling. Locations of missing, damaged or vandalized RoW markers were flagged as well.

One of Enbridge’s requirements was that there be no vehicles in the RoW, and this ruled out on-road as well as off-road vehicles, even small, single-user machines.

So, we pulled on our boots (and on perhaps too many occasions, our chest-waders), set up teams of two for safety, and started walking.

A journey of 623 kilometres starts with … preparation

Of course, the first step was preparation and planning. This included having letters sent to property owners along the route, letting them know that there would be surveyors inspecting the RoW, and explaining that the purpose was to ensure public safety.

Another part of preparation was making sure our crews would be able to follow the route of the pipe accurately — quite a challenge in some places because of the other utilities also located in some parts of the easement we were following.

Part of our success in pipeline location was through a phone-based locator app developed by PVS. It simplified the task of pipeline location, recording the work completed and the location of anything requiring Enbridge’s attention.

Our app also helped with data processing, reducing the need for human input of data, which is time-consuming as well as posing a risk of data gaps and errors.

A less-invasive approach, by foot

We found that most people we encountered, including property owners, had no problem with our crews walking through. They just weren’t used to the idea of crews doing the inspection on foot.

Previous contractors inspecting the line had done so using motorized vehicles, and this had generated complaints from some landowners about damage to crops. This is one of the factors that motivated Enbridge to require the feet-only approach by our crews.

Our work did not generate any complaints at all, which helped Enbridge meet one of its priorities, namely good landowner relations.

Another benefit to taking the time to walk the route came in a higher quality of data. One contributor to this was our use of the corrosion test point boxes that Enbridge generally locates on the side of roads where they cross the pipeline route. We would hook up our locating equipment to these boxes, which contain electrical charging devices much like car batteries, allowing us to boost the electrical signal that helped us locate the pipeline.

This produces more accurate data than the method some surveyors rely on — a portable device that shoots electricity and magnetic frequencies into the ground to determine the pipeline’s location and depth. This method has its uses, but sometimes lacks accuracy. In one place, a previous crew had used this method, which produced readings showing the pipe to be 20 metres underground. We checked and found the line to be actually just three metres down.

At PVS, our staff are taught to not use this second method without checking with their supervisor, as the data quality may be suspect.

We found that our crews would generally cover about 35 km in a day, but only about five of those were actually “productive” kilometres in the sense of covering pipeline RoW. The rest involved getting around obstacles such as rivers, where it was necessary to walk to the nearest bridge and then back on the other side. Sometimes, we found our way blocked by electric fences and other such barriers, and had to find the owner of that property before we could continue with our work.

That stretch of southern Ontario and Quebec offered its own natural challenges. About half the distance was wetland, in which crews were testing each step of the way, and in many cases hauling hip-waders out of their packs when ground turned to mostly water. Particularly during the summer heat waves, chest-waders were a hot and thoroughly uncomfortable necessity, to be replaced with regular boots as soon as possible.

Along with the mosquitoes and other insects, there were other serious health hazards including giant hogweed, poison ivy and wild parsnip.

The value of intensive, boots-on-the-ground surveying

In this case, our pedestrian approach to the work paid off. One benefit was in being able to interact with landowners and other pipeline neighbours in a human way, rather than being considered invaders, as might have been the case if we had been using vehicles. We could take time to explain the purpose of our work, and we found that most of the people we encountered were pleased that such effort was being taken to ensure their safety.

We also gained the professional satisfaction of having done a thorough, reliable job on behalf of landowners, the general public and of our client, Enbridge.

Jason Edwards is the general manager of PVS Contractors in Ontario. PVS has been in business for over 40 years and completes more than 300,000 utility locates annually in the Greater Toronto Area. 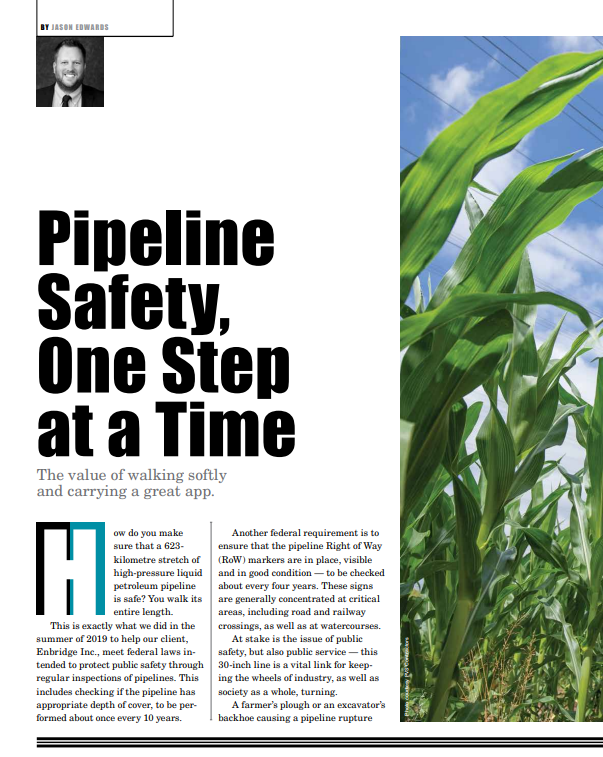 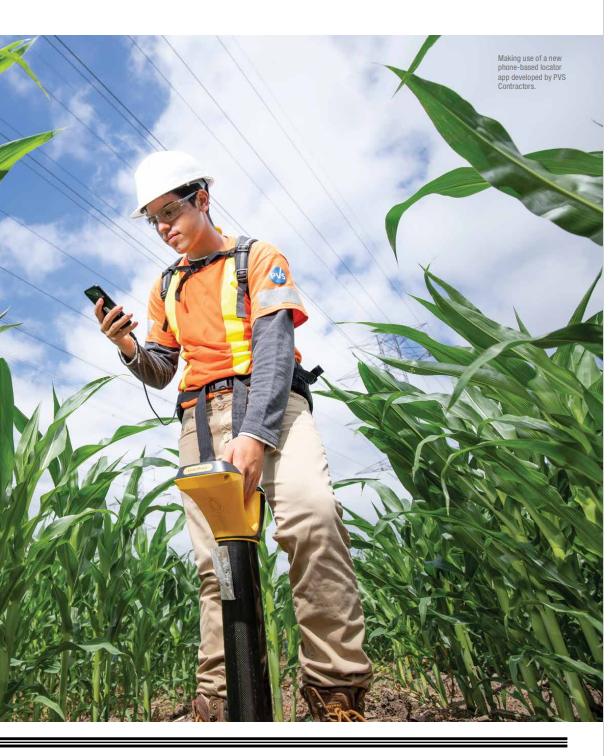 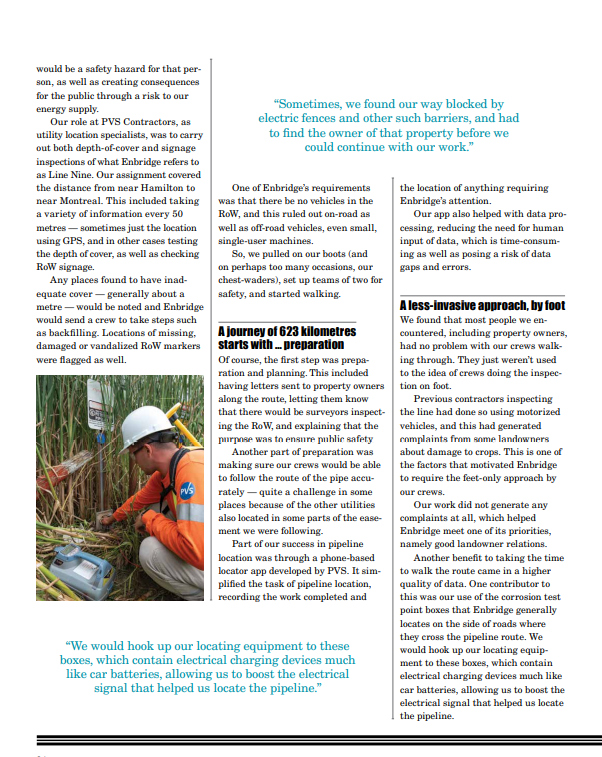 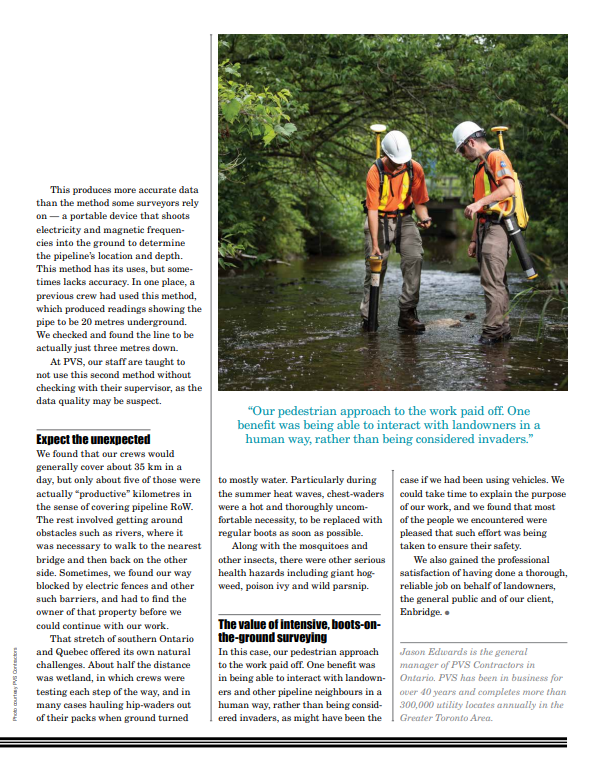