When it comes to pipeline politics, Canada appears to be divided. But those “for” infrastructure projects and those “against” them actually have a lot more in common than it might appear.

We want a clear and predictable regulatory process that ensures Canadian energy is delivered in the safest possible way to all the markets demanding our oil and natural gas—something that all Canadians stand to benefit from. We want to ensure that resource development and transmission are done in a manner that protects the environment. We want to see the social and economic benefits that come from responsible resource development. These aren’t just Alberta’s problems, these are Canada’s problems.

At the time of writing, Western Canadian Select is trading at an almost $17 differential to West Texas Intermediate. That is money being ripped from Canadians’ pockets. And while energy infrastructure projects already face numerous challenges to get approved and built, Bill C-69, in its current form, certainly isn’t the right solution.

Canada’s energy transmission pipeline companies are clear on what amendments they would like to see, and we ask the Government of Canada to take the time to get this right.

The Canadian Energy Pipeline Association (CEPA) is concerned about the economic future of all Canadians. Now more than ever, our country needs regulatory clarity to support the much-needed well-paying jobs the energy industry creates, which contribute to economic benefits across the entire country. We need regulatory clarity so international investors can feel confident about investing their capital in Canada.

Bill C-69 poses a major risk to the economic competitiveness of Canadian businesses from coast to coast to coast. While meant to streamline environmental assessments and regulatory approvals, Bill C-69, in its current form, adds unnecessarily cumbersome requirements and extended timelines to major Canadian infrastructure projects. So much so, that foreign investment in our energy industry, which is already moving to less-risky opportunities outside of Canada, is unlikely to return. But the Government of Canada has a chance to change negative perceptions and encourage international investment. Here are some options to consider.

1. Amendments to de-risk from increased litigation and judicial review

As evidenced by the recent Federal Court of Appeal decision regarding the Trans Mountain certificate of approval, the risks of litigation are serious and increasing. The current version of Bill C-69 heightens this risk. Years of legal precedents will be erased, leading to new standards defined by the courts.

CEPA is making every effort to work with government to identify areas that could result in additional judicial challenges, and we are proposing amendments aimed at clarifying and removing potential risk. Key court challenges interpreting Bill C-69 would heighten investor uncertainty threatening the social and economic benefits that Canadians want to see from major infrastructure projects, like pipelines.

There must be amendments in the bill to address legal challenges that have delayed or stopped transmission pipelines after years of review, approval, and equipment and supplies have been moved into place to start construction.

Once a decision is made, that decision should be final and not subject to additional reviews aimed at delaying or killing a project.

CEPA has been asking for the de-politicization of the regulatory review process for more than two years since the Government of Canada put the National Energy Board (NEB) modernization expert panel into place. We have argued that while broader public policy issues are important, regulatory review of individual projects is not the place to discuss them.

We recommended a two-part review that moves political and broader policy issues to the beginning, before the project undergoes its technical and environmental assessment. As it is currently drafted, the bill does identify those policy issues that might stop a project, but they are not dealt with early in the project development and are instead addressed in a later assessment stage as well as the final decision at the very end of the review.

In its current form, Bill C-69 has the potential for delays and extending already burdensome timelines. Time outs, extensions and increased scope of study areas will lead to timelines exceeding those currently under the NEB review process.

It is important that the regulatory process offers inclusive public participation opportunities but not at the cost of unreasonable and expensive delays. Optimizing public participation should be about balancing procedural fairness with the desire to enable concerned voices to be heard. That means requiring science and fact-based evidence, not anecdotal observations based on opinion or attempts to obstruct regulatory proceedings.

The “standing test” under current legislation has meant that the NEB and other Canadian regulators use a test to determine those who are directly affected by major resource projects and give them a place to speak their views. Bill C-69 eliminates the standing test, leading to a potential outcome whereby anybody, regardless of whether she or he is directly impacted, or impacted at all, could participate equally in the review process.

There needs to be a process in place to ensure both flexible and scalable participation in the review process, at least in the case of intervenors. The idea isn’t to remove a participant’s ability to engage on a project review, rather to ensure that timelines don’t become unwieldly. This stage of the review process, in its current format, is already costly to pipeline proponents and having it undefined and uncontrolled means even more unpredictability and risk for investors.

CEPA strongly believes that all pipeline reviews should be led by the NEB as the best-placed regulator. The positive changes being made under the Canadian Energy Regulator (CER) Act to strengthen governance and public trust outweigh any need for the Impact Assessment Agency being involved in pipeline project reviews. Replacing the NEB—a regulator and agency that credibly reviewed and approved the LNG Canada project (and other major projects)—would erase a rich history of decision-making precedents and proven processes to start from scratch.

We need to find common ground and come to an agreement so that we get Bill C-69 right.

Getting Canadian-produced oil and natural gas to new and existing markets is essential to navigating a path for the future of Canada. But we won’t access those markets if we can’t get more transmission pipelines built. That means we are at a loss when it comes to getting fair-market prices for our resources, specifically in the order of tens of millions of dollars lost from Canada’s economy every day.

The lasting effects of the bill will be felt for generations across Canada. The well-paying jobs and economic benefits created by the energy industry have the potential to reshape the future of our country. Transporting Canadian resources to the people that need them means doing it the right way with proper and timely regulatory processes in place.

We can do all this, but we need to get Bill C-69 right if we want Canadian oil and natural gas to be part of the energy future. A future that can be safer and smarter, if we work together.

“CEPA has been asking for the de-politicization of the regulatory review process for over two years -- while broader public policy issues are important, regulatory review of individual projects is not the place to discuss them.”

Chris Bloomer is president and CEO of the Canadian Energy Pipeline Association. With more than 30 years of experience in the domestic and international energy business, Chris leads the industry association that represents Canada’s transmission pipeline companies, which operate 134,000 kilometres of pipeline in Canada and the United States. Chris has a degree in Geoscience and is a member of The Association of Professional Engineers and Geoscientists of Alberta (APEGA). 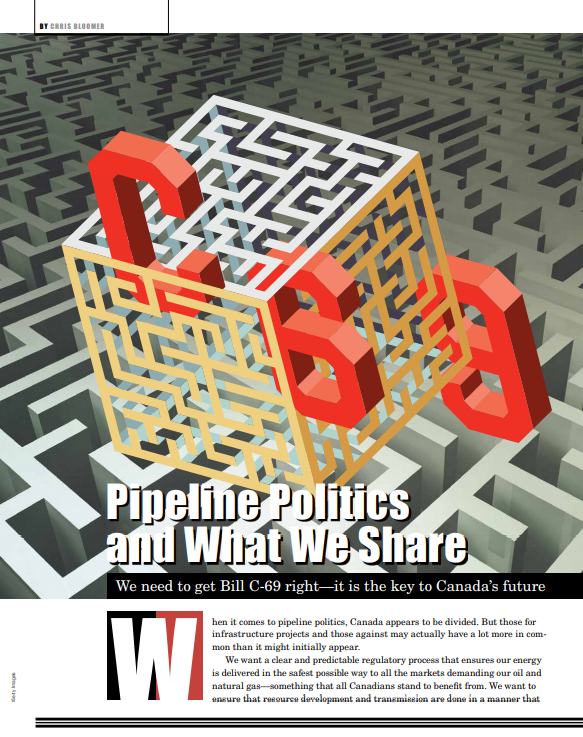 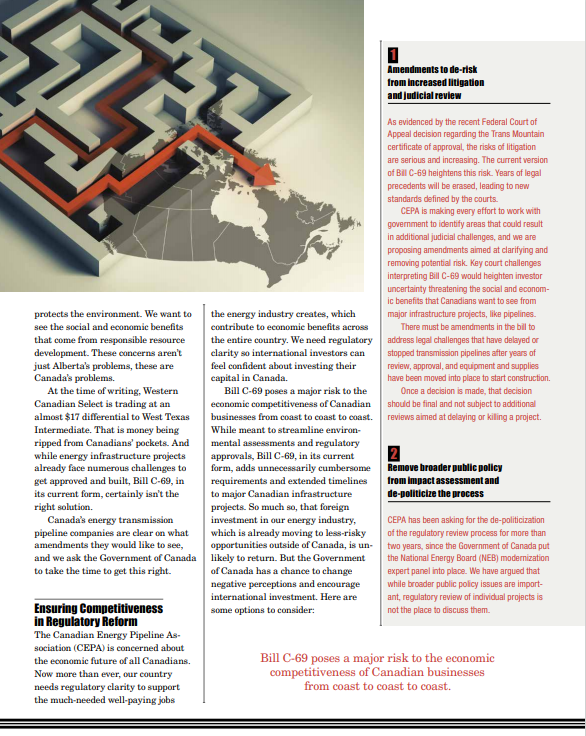 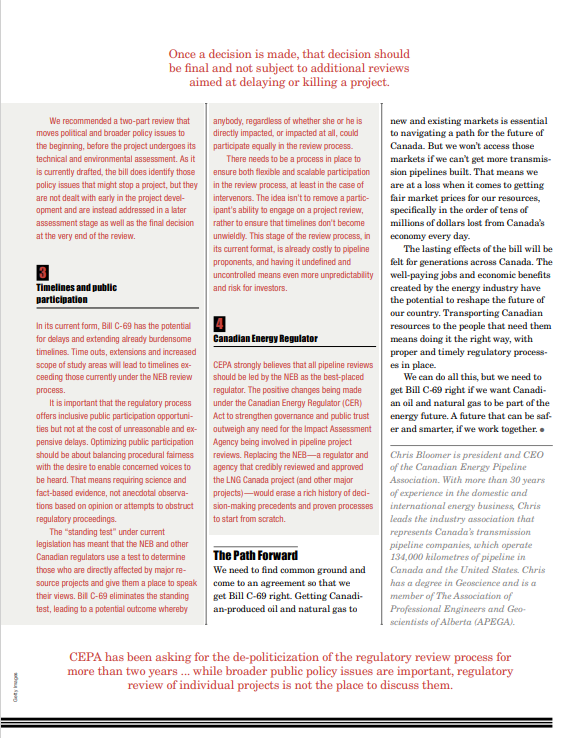