Pipeline Landowners Caught in the Crossfire

"The trespass, occupation and vandalization of private family farms and industrial sites are not acts of protest. They are gross violations of property rights that need to be vigilantly defended against."

As I was contemplating my article for this edition of Pipeline Observer, one of our CAEPLA members from Ontario contacted me to let me know that a group of “environmental” activists, who had shut off a pipeline valve and then chained themselves to it a year ago, left a Sarnia courtroom Jan. 13 without criminal convictions.  The decision was billed as a precedent-setting victory for anti-pipeline agitators across the country.

After searching the Internet, I came up with two different headlines regarding this court judgment, from two different news services — two views of the same basic story.

But there’s a third headline that clarifies what is really at stake for landowners and the public. This headline, and the blog that follows, is one we published a year earlier, shortly after the incident occurred. It explains clearly, from a landowner perspective, the dangers of the original action by the activists and the potential risks if these activists are not held accountable.

It also discusses the hypocritical double standard of this judgment (considering the administrative penalties and criminal liabilities for which landowners are responsible under National Energy Board crossing and safety regulations) and provides some possible solutions to reduce risks going forward:

Pipeline Landowners Caught in the Crossfire

In the name of the environment, green activists put the lives and livelihood of farm families like yours at risk

Three environmental activists invaded an Enbridge valve site on a Sarnia, Ont., area farm this week to shut off the flow of oil through Line 9 and chain themselves to equipment.

Not only did the trespass, occupation and vandalism threaten pipeline safety and create potential for a leak or spill — the very things the activists claim to oppose — the invasion put a farm family at direct risk.

Had something gone terribly wrong during this stunt, the lives and livelihood of the farmers hosting the valve compound would have been affected first and worst.

The fact is farmers, ranchers, and other landowners have increasingly been put in the crossfire by what are arguably acts of “ecoterrorism” by aggressive green activists determined to shut down the oil sands by paralyzing the pipeline industry.

The activists — three women in their 20s — claim they “did not give consent” for bitumen to be piped through the area.

Yet it is clearly they who have violated the concept of consent by ignoring the property rights not only of Enbridge, but more importantly of the farmer whose family they put in harm's way.

The three women were charged with mere “mischief.” But had the same farmer they inflicted themselves on failed to follow federal rules governing the crossing of pipelines on his own property, he might have faced fines in the hundreds of thousands of dollars and potential jail time. (Editor’s note: if you are interested in learning how to safely “cross the line,” send us a note and we'll tell you how you can download Enbridge's new pipeline crossing app for your smartphone, tablet, or PC.)

Clearly National Energy Board regulations and even the Criminal Code are inadequate tools for preventing political acts that violate property rights and put lives at risk.

It might be time for landowners to take matters into their own hands.

A first step could be hiring security to protect their property from trespassers. The cost could be deducted directly from taxes as a cost of doing business.

Next step ought to be for affected property owners to file civil suits against individual trespassers, occupiers and vandals who so negligently and recklessly endanger farm families and businesses. Win or lose, bills for legal fees should be forwarded to the governments and regulators who have effectively encouraged these potentially destructive political “protests.”

To protest means to “bear witness,” usually to something we object to. Protesting is a natural right of Canadians. But the trespass, occupation and vandalization of private family farms and industrial sites are not acts of protest. They are gross violations of property rights that need to be vigilantly defended against.

This is yet another example of why industry needs to respect the property rights of landowners and embrace us as partners.

If pipeline landowners are to be energy transport's “first line of defense,” farmers and ranchers need to know that companies — and the general public — have their backs.

While it is important never to exaggerate threats, it would be irresponsible not to acknowledge that the aggressive actions taken by environmental activists near Sarnia this week could easily and suddenly turn tragic. 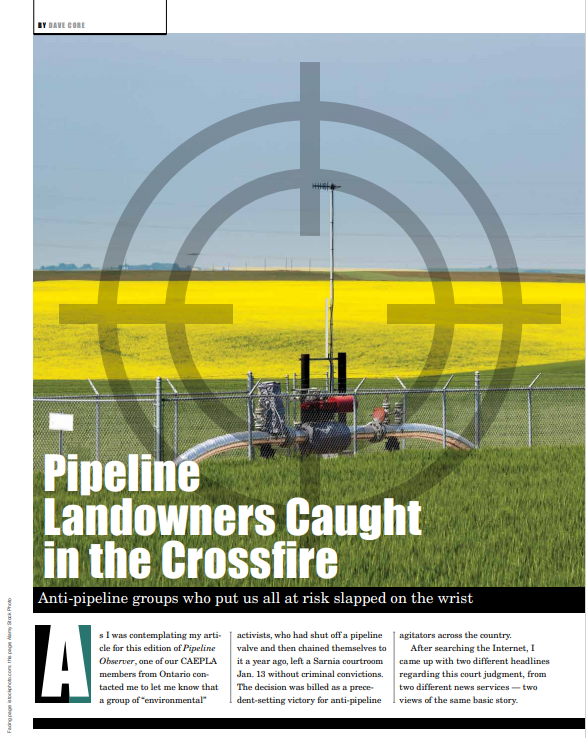 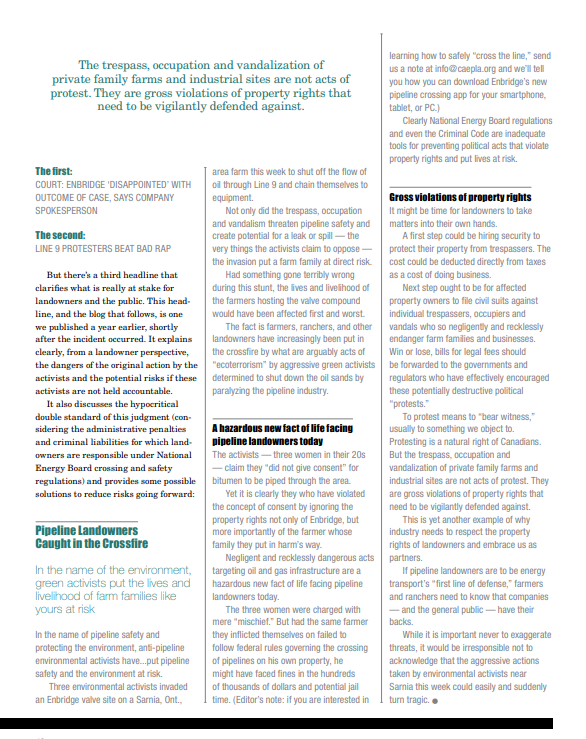