“Everything changes and nothing stands still.” —Heraclitus of Ephesus (535 BC – 475 BC)

Greek philosopher Heraclitus could have been talking about the energy transport industry when you consider the challenges it has faced recently. Some companies change while others try to stand still.

Once upon a time, pipelines were “out of sight and out of mind.” That is no longer true.

On any given day, pipelines can be among the most talked-about topics in the news and trending on social media.

In an effort to stop pipeline projects, radical anti-pipeline activists have co-opted too many landowners who have been disrespected by pipeline companies.

In their attempts to protect “Mother Earth,” these green activists have trespassed on private property and sabotaged valve sites, putting the landowners who live along the pipeline, as well as the environment, at serious risk.  There are reports of these activists even drilling holes in pipe, endangering themselves and the pipeline workers who adhere to strict safety protocols.

Even five years ago you would never have heard any of this. It has become commonplace, and looks to only change for the worse.

When CAEPLA was formed nearly a quarter century ago, it seemed radical, as it attempted to raise the standards on how pipelines were built to protect landowners’ safety and the environment. After all, landowners live with the pipes “24/7/365.”

As technology and the economy change, agriculture does too. Those who recognize and embrace change will be positioned for the future. Those who refuse will fall behind.

And what’s true of farming is also true for pipelining. At CAEPLA we see some companies adapting to change in the way they operate, while others still seem to be doing business in a bygone era where the regulator had their backs and pipelines were out of sight and out of mind.

Not good for business

The latter approach is no longer good for business.

These days, disrespecting landowners, threatening those who want to have their legitimate issues addressed with Eminent Domain or expropriation (forced Right of Entry) runs the very real risk of driving a majority of them into the waiting arms of anti-pipeline activists only too happy to use them in their war on Canada’s oil sands.

CAEPLA offers a better option. An option that doesn’t put farmers and ranchers in the awkward position of participating in radical political protests or opposing something most depend on: abundant affordable energy.

In CAEPLA’s experience, one pipeline company has been open to change and embraced landowners as partners. Proof of this new approach is the win-win business agreement CAEPLA negotiated for our members with Enbridge for its Line 3 Replacement project a couple of years ago.

Enbridge has made good on its commitments in this precedent-setting business agreement. So far, construction has proceeded on three “spreads,” problems have been few and far between and when they arose were resolved very quickly to the satisfaction of every landowner involved. This is not something we ever thought we would say about any energy transport actor, even a few years ago.

CAEPLA’s latest workshop series held on the Prairies in December shows how much things have changed for the better. The Enbridge team updated landowners on the progress of construction, provided insight and answered questions in detail on everything from how its industry-leading biosecurity protocol and business agreement commitments are benefiting landowners on the ground.

While the workshops were a relaxed, open environment,

CAEPLA members and staff still pressured company reps with some tough questions. As one participant commented, “this certainly wasn’t a lovefest, but was a very interesting and beneficial meeting.”

Which is the whole idea.

The Workshop Series was designed as a service to landowners, not a PR exercise for Enbridge. Landowners were glad to have both Enbridge and CAEPLA in the room to have their questions addressed in a wide-open forum.

We sometimes half-jokingly compare pipeline companies to ocean liners in terms of their ability to change direction. Yet Enbridge has quite quickly adopted openness and authenticity as a priority in landowner relations. Again, something we never thought we’d see.

And being held to account is no surprise for Enbridge. In his address at the 2015 annual general meeting, Enbridge CEO Al Monaco acknowledged Dave Core, CAEPLA’s CEO, and remarked on how “he does a good job of holding us to account, but also in finding solutions to make projects better.”

Further demonstrating this openness to respect landowners and “find solutions to make projects better,” Enbridge’s directors invited Dave to share landowner perspective with them at their annual board meeting last September.

Dave conveyed candidly the tough reality of how landowners felt disrespected in the past, acknowledged the changes that Enbridge has made in how it treats landowners and pointed out the opportunities for the future as landowners and the company further develop a mutually beneficial partnership.

This openness at the executive level is being transmitted through frontline Enbridge reps as they engage landowners at the grassroots.  This open relationship goes a long way in building trust, not only between landowners and Enbridge, but for the public as well.

It’s positive change, and one we feel all of energy transport can embrace.

Annette Schinborn is CEO and Director of Landowner Relations at CAEPLA. Before joining the team at CAEPLA, Annette worked with grassroots nonprofits including the Canadian Taxpayers Federation, the Prairie Centre and the Western Canadian Wheat Growers Association. She has worked closely with farmers, ranchers and other landowners on issues such as tax and agricultural policy and now energy transport and property rights. 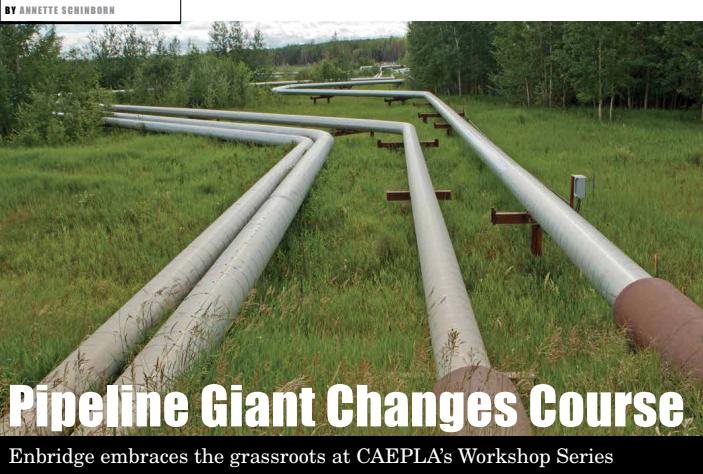