“I’ve had guys working here thinking it is hilarious to be running down horses or wildlife with quads or snowmobiles.”

Valarie Urquhart looks out her window to a land she loves. It’s a stunning setting not far from Valemount, B.C., a place she shares with wildlife, with a quiet serenity only nature can deliver.

But the woman says the headaches and hassles of dealing with pipeline workers and officials on her land has become exhausting.

“They are bullies,” she says.

“They have the government behind them and the energy board behind them…and no lawyer will take a landowner on because they will lose.”

Although the relationship between the pipeline workers and Urquhart deteriorated quickly, it wasn’t always tense. And it didn’t have to be.

Urquhart purchased the land, which is about 120 acres, in 1994 hoping, with a little mutual respect, she and the pipeline project could co-exist.

“I thought I would just be a good neighbour and allow [workers] to access my property,” she says. “How stupid was I?”

Over the years, workers have stolen her Wi-Fi, slowing her internet connection. They put locks on her gates, which once kept her from accessing a horse that was sick with cancer. Urquhart says pipeline officials “had a great, big laugh” when she complained.

The antagonistic relationship fuels Urquhart’s fears about the future of the land she loves, with its mountain views and pastures, old and young growth, marsh and creeks. And the difficult history leaves her worried about the welfare of wildlife on her land: the bears, moose, white-tailed deer, moose and cougars, wolf packs and coyotes.

“I’ve had guys working here thinking it is hilarious to be running down horses or wildlife with quads or snowmobiles,” she says.

Years ago, Urquhart spent months earning the trust of two horses rescued from the Kelowna fires. That was lost when pipeline workers showed up in a chopper.

“They were flying low and chasing the horses because they wanted to land in my pasture, so they thought they better move them,” Urquhart says of the dramatic ordeal.

“It traumatized them. During the fires, they rounded up the horses with helicopters and herded them into livestock trailers.”

The reaction by pipeline officials after that incident illustrated just how broken any good-neighbourly relations really were.

“When I complained, the rep laughed at me. It was just a great big joke [to him],” she says. “It made me despise them.”

Numerous landowners are frustrated and complain of being dismissed by the pipeline officials operating on their land. Some say when they are not ignored, they are bullied and harassed.

At least two older women have turned to police saying they are being bullied by pipeline officials.

Many won’t speak out publicly for fear of retribution. And according to those willing to, that is testament to a divide-and-conquer approach employed by pipeline officials.

Urquhart knows she is not alone, but says dealing with the ugliness of having a pipeline on her property has left her feeling that way.

“I’m disgusted, depressed, angry and I feel betrayed. They will do whatever they want and I can agree to it or disagree to it. They are going to destroy the property, threaten the animals and won’t do clean-up.”

Fellow landowner, Maria Lerch, found what she was looking for when she and her husband, Gerhard, bought an acreage to raise their children.

Lerch says land agents were initially annoying but seemingly innocuous, stopping by for discussions about “all the good things we weren’t interested in.” They mailed cheques the family never cashed and brought papers they never signed.

In 2016, the couple’s eldest son was diagnosed with lymphoma and that, Lerch says, is when pipeline officials preyed upon their vulnerability.

“When that all happened, we were not thinking clearly,” Lerch says.

They lost their son in October, and in January the land agent was back — only this time, the couple signed the documents.

“He told us, ‘I am sorry for your loss, but I still have to bug you,’” Lerch recalls. “I couldn’t deal with it. His tactic was to choose our weakest moment for us signing after years. That constant pressure was hard on us. It was nerve-wracking.” 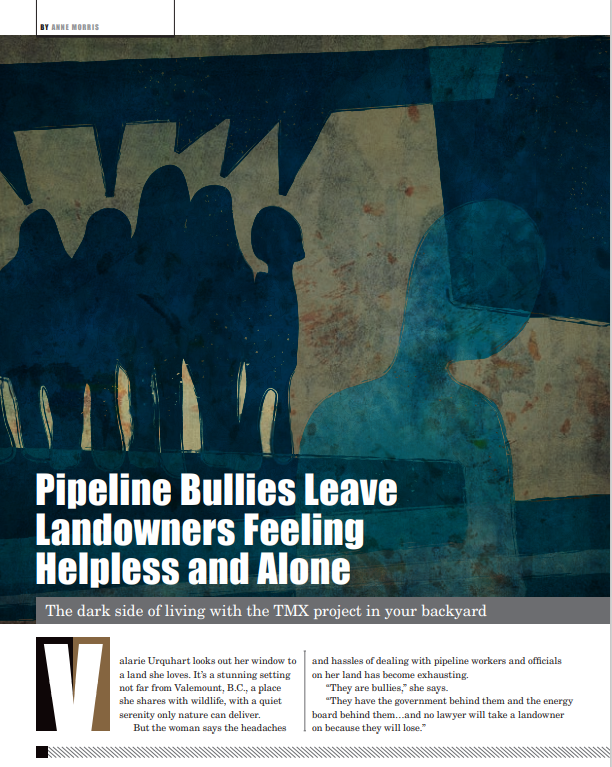 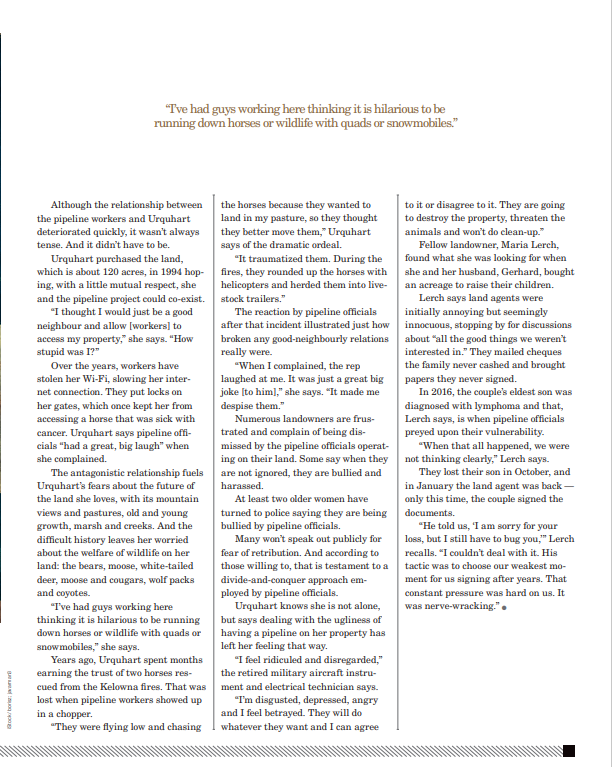