Picturing the Impacts of Government Mismanagement on Isolated Pipeline Landowners

A look at the lay of the land around the TMX project at Laidlaw, B.C.

“It actually was an idyllic, secluded village until Trans Mountain decided to overrun it with a huge pipe yard at one end and a 350-person construction camp at the other.”

As CAEPLA works to get the word out on the impacts pipeline development can have on communities when pursued recklessly, I thought it would be helpful to paint as much of the picture as I can.

To illustrate the situation currently unfolding on a community hit hard by the federally owned Trans Mountain Expansion project (TMX) and “our” shiny new Energy & Reconciliation regulatory agency, I offer the following sketch.

Laidlaw is a small rural community just south of Hope, B.C., landlocked by the Fraser River on one side and mountains on the other and literally bisected by the TransCanada Highway. The small portion on the east side of the highway, landlocked by the mountains and the TransCanada, happens to host the Trans Mountain pipeline and retains the full length of Laidlaw road, a short road paralleling the highway, dead-ending at cloverleafs about six kilometres apart.

I would imagine, just like me, the majority of British Columbians have driven by this community on the TransCanada Highway many times without noticing it. It is not until you look at a Google map that you realize its isolation.

These days, you can’t help but notice it — the pipe storage yard is pretty hard to miss.

Once an idyllic, scenic village

It might be easy to dismiss these folks’ concerns until you get a clearer picture of this community’s uniqueness in this very crowded corridor.

It actually was an idyllic, secluded village until Trans Mountain decided to overrun it with a huge pipe yard at one end and a 350-person construction camp at the other end of its only thoroughfare.

The pipeline construction alone is more than enough industrial development for such a small landlocked valley community no bigger than three square km. A quick look at Laidlaw on Google Maps highlights the community’s unusual uniqueness and isolation in what would otherwise be a simple rural landscape. You will see that this small rural valley community at the base of the mountains is framed by impervious borders, the mountains behind and the freeway in front with only the two exits six km apart on one single road.

Pull the image back a little and you can see the Northeast entrance/exit off the TransCanada Highway to Laidlaw Road at Thompson’s Landing, and about six km later the Southwest cloverleaf entrance/exit at that end of Laidlaw Road.

Now if you bring the map in closer, about two km southwest of Thompson’s Landing is the “Hope Scale.” Almost directly across from the scale is the entranceway to the new 350-person Trans Mountain Ohamil Construction Camp, built under special exemption from environmental, cultural and consultation conditions.

On the outdated Google map it still shows up as forest as part of the Ohamil 1 reserve land (the previous forest included identified endangered Oregon forest snails and archeological sites). Last year that forest was bulldozed (cleared) for the barren temporary construction camp while at the other end the same was done for the temporary pipe yard.

Less than four km farther along, just before you get to the southwest exit to the highway, is the huge Trans Mountain pipe yard.

In between are the people of Laidlaw with their many small homes, acreages, farmland and one dairy farm that backs up to the highway and wildlife. It was never intended to be an industrial development or an encampment for four times its population.

Now let’s hear from several of the locals — I have agreed to withold their names entirely as many have expressed fears they will be harassed by land agents or others for speaking freely about the sadness they are experiencing with what is being done to their once-happy hamlet.

“Most of us over the years have located in Laidlaw because of the sparse, widely spaced population. This provides the opportunity for enormous ‘solitude benefits’ in a natural environment. Bears, cougar, bobcat and coyote are only a few of the animals that inhabit the area. The dramatic increase in population, traffic and heavy machinery and the clearing of forest has and will change our community.”

“Bears with their cubs hang out in the old fruit trees just outside my front window and salmon swim up the creek in my backyard.”

“The replacement of the pipeline was really all this community and our natural environment could really bear, we accepted the pipe yard to show our support for the old pipeline replacement, but then to have Trans Mountain and the CER underhandedly overwhelm our community with this camp using the local First Nations as their scapegoat is just too much.”

I could continue sharing the testimony of these directly affected folk. But the point is any community would be overwhelmed by so much uncontrolled and “temporary” development.

Understanding the geographic and boundary issues in the Laidlaw situation will, I hope, allow the public to appreciate the appalling impact government is having on real people and wildlife with its recklessly mismanaged and under-supervised TMX project. 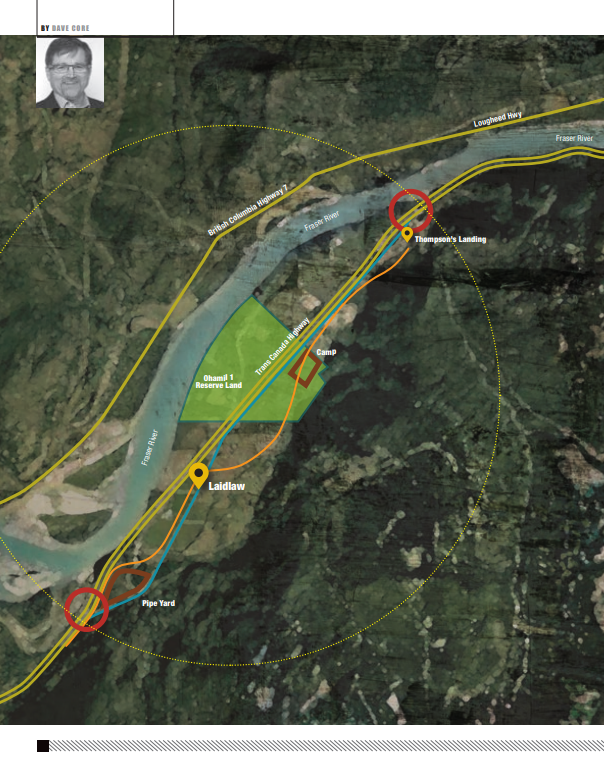 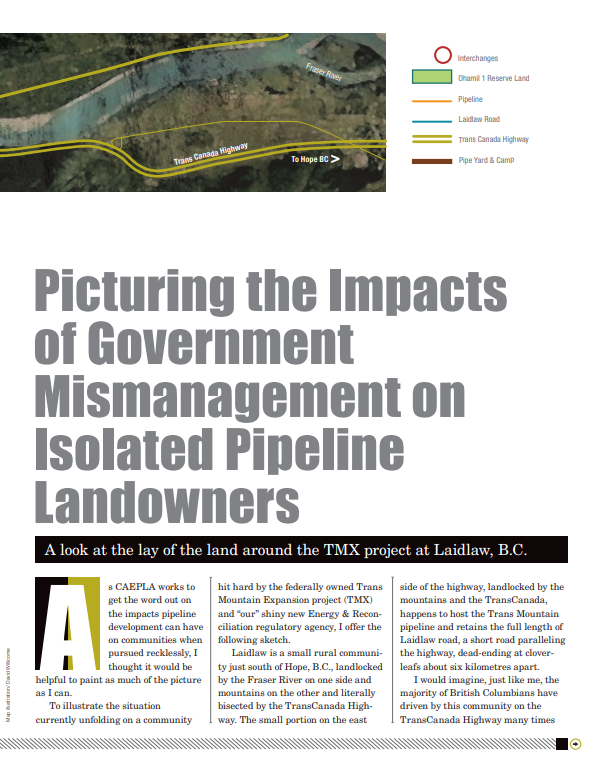 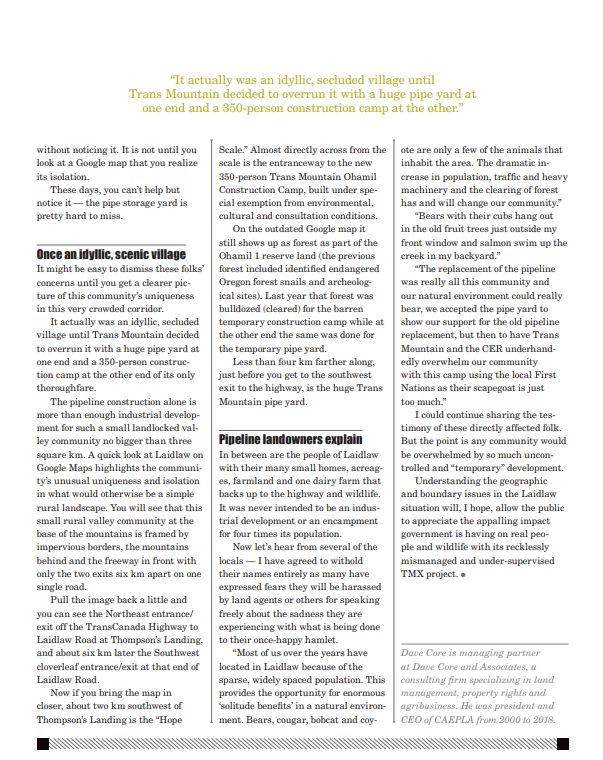