Ottawa’s New Energy Regime is an Open Invitation to Protest

What’s the big deal? CAEPLA isn’t opposed to reconciliation with Indigenous Peoples in Canada, so why is CAEPLA opposed to the CER’s Indigenous Monitors?

Remember what was happening just prior to the COVID-19 pandemic? Supply chains in Canada were already being disrupted by protests on railways and other infrastructure allegedly in support of Indigenous opposition to the Trans Mountain Pipeline expansion project in British Columbia

Government’s Lack of Respect for Landowners

What happens when protesters decide to use the IAMC and the CER to gain entry to private lands for their own purposes, which may have nothing to do with Indigenous interests at all?  Would you feel safe knowing that there is an open invitation to enter onto your property just because the Government decided that an energy project should be built there?

The Government’s lack of respect for landowners’ property rights and privacy rights will expose landowners to entry onto their lands by individuals and groups who are a risk to the health and safety of landowners and their families.  The Government’s push to protect Indigenous rights and interests on private properties threatens to take anti-energy industry protests from railways and highways onto Canadian farms and ranches.

This is short-sighted and irresponsible.  The Canadian Government needs to protect the safety, security and privacy of the landowners on whose lands it has allowed energy projects to be constructed.

It’s doing exactly the opposite. 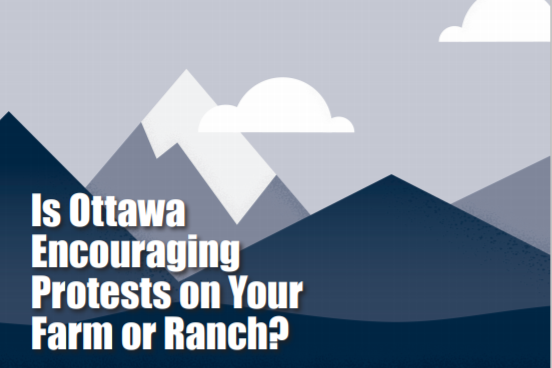