But what will inflation mean for farm production costs and risks?

Inflation concerns are suddenly hitting the mainstream in 2021. It’s going to become an even bigger topic going forward, especially for landowners.

Ottawa’s utterly unprecedented and bewildering $380 billion budget deficit in response to the virus panic is being financed primarily by the Bank of Canada (BoC). Not foreign creditors, not big pension funds, but our own central bank.

What that really means is Ottawa is paying its bills with the BoC printing press.

When the Bank of Canada buys an asset, it literally brings new money into existence. It is no different than if you could simply add zeros to your bank account balance at will.

When the government increases the money supply, it dilutes the value of the currency because there are more dollars relative to the same number of goods. This pushes up prices.

We are seeing this now in a lot of sectors that are smoking hot despite an economy that is still being strangled by the response to the virus.

But the upward pressure on prices does not occur evenly or affect everything the same way.

One of the most critical insights about inflation — one obscured by economists’ talk about abstractions like “general price levels” and such — is that new money enters the economy at specific times in specific places.

Right now, this new money enters through the banking system and is then spent by Ottawa. Perhaps it starts with emergency subsidies, corporate bailouts and gravy for cronies. Over time, some sectors surge as new money pours into them — perhaps commodities, real estate, or technology stocks. The dynamic of the market directs the flow of funds.

“If oil prices soar due to inflation, demand for energy infrastructure will increase. In a world where expropriation is an option, this increases risk to property owners.”

What is this going to mean for landowners?

Although inflation tends to push up the prices of real assets, property owners should not assume that numbers going up on paper means more value in the end.

However, costs are also subject to severe pricing pressure. When there is new money competing for the same inputs, those prices will be pushed up.

For producers, they have a lot of competition for their inputs: fuel, shipping, equipment, chemicals, personnel, etc. These prices will tend to rise fastest because new money will tend to move into capital goods industries.

A farmer needs to produce before they can sell, and this takes time. As they work toward finished crops for the market, their production costs are now increasing. Their higher selling prices, later, aren’t guaranteed to have risen in the same proportion — or even at all for some goods.

There is another issue that will be appreciated by CAEPLA readers. If oil prices soar due to inflation, the demand for energy infrastructure will increase. In a world where expropriation is an option, this increases the risk to property owners. Big business and its bureaucratic allies will become more aggressive, and costs for operations, maintenance and decommissioning will also increase.

The landowner can easily be a net loser in the end — especially if the government is piling on new taxes and regulations at the same time.

There actually is no difference — both statements mean the same thing. An increase in land prices means the dollar buys less land.

The value of productive land will not rise in real terms if the increase is just the result of new money created out of thin air by the BoC.

The value of land comes from its ability to create value, whether with agriculture or livestock or commercial development or simple peaceful enjoyment.

Creating new money for the government to spend does not create more value anywhere — it just distorts everything and benefits primarily banks and industries with political connections.

Our so-called leaders in Ottawa are walking an extremely dangerous path.

Clayton Reeder is a mergers & acquisition advisor in Calgary. He works with many clients in the oil and gas sector and owns farmland in central Alberta. He loves oil and agriculture. 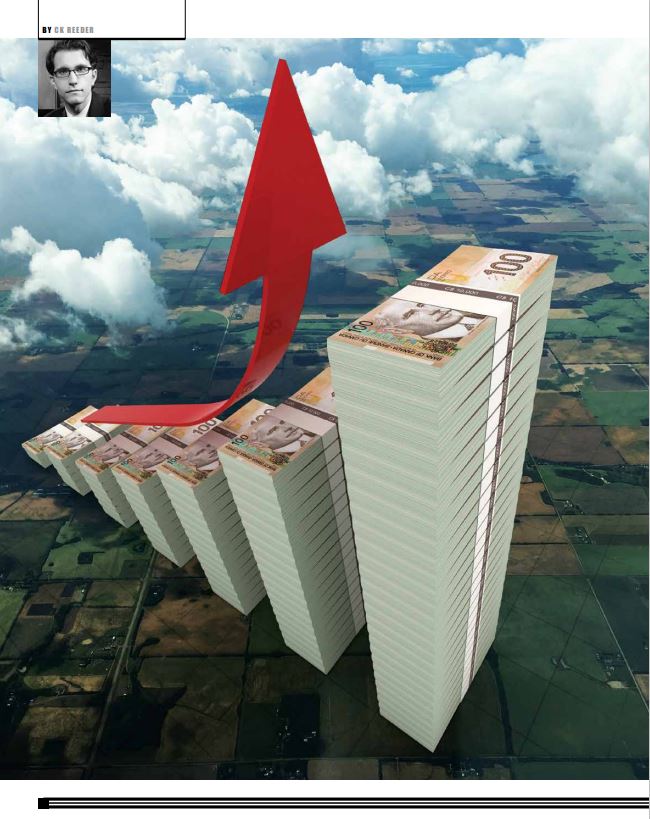 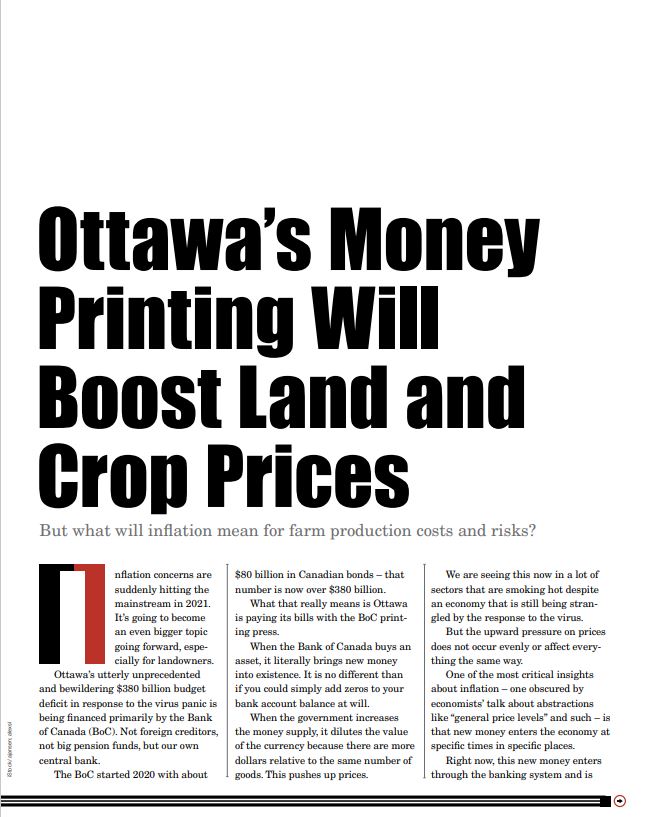 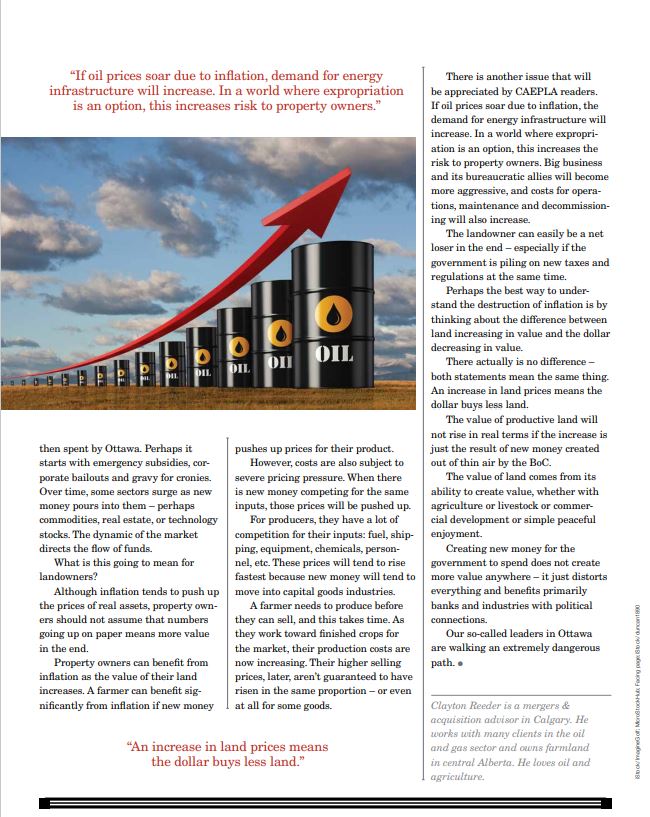