To understand what they're thinking in the oil and gas company head offices, start with what they read

This column is an opinion from David Yager, a Calgary oil executive, writer and author.

The rest of Canada concluded long ago that the living dinosaurs who occupy the office towers of downtown Calgary are, to put it as nicely as possible, weird.

Because these non-fossilized escapees from the Royal Tyrell Museum of Paleontology in Drumheller have it wrong.

Don't they know that because of climate change, fossil fuels have no future? That it's clearly a sunset industry?

Don't they understand that a massive energy transition is underway that will pass them by if they don't get with the program? That renewables can and will replace fossil fuels?

No, they don't. And it's worse than that. They believe that too many Canadians have got it wrong. That changing the world's energy mix is far more complex than political will and feeling good about doing the right thing.

Why do they think that way? You should see what they read!

They are in the energy business, not the public policy business.

So they know that, of the 95 million barrels of oil that are consumed every day, only two per cent of that is used in Canada. Of the 7.8 billion people on the planet — almost all oil consumers in some way, even if it is only plastic — 99.5 per cent live outside our country.

It is the global community, not Canadian policy, that ultimately sets the future for oil and the climate. So the oilpatch watches international data carefully and continuously. It's their job.

The result is a very different viewpoint from what the media reports and the politicians say.

Because as oilfields mature, they produce more water and less oil. Petroleum production falls and costs rise. Without more investment, Russia won't be able to produce at past levels.

But oil consumers aren't listening. They do what they want, not what they're told.

As the public debate rages about the need to end the use of oil, only the producers and the business press notice that global consumption is already up to 95 per cent of pre-COVID levels. Global oil demand will be back to its 2019 peak late this year or in early 2022.

In early February, world oil prices were back to that of a year ago. This is not intuitive with airplanes grounded, travel restricted, businesses shuttered and people locked in their houses.

Higher prices will give the industry the cash and incentive to develop more. The global reality is much different than a few big outfits like BP saying they are exiting the business.

Global market forces and the immediate needs of 7.8 billion people doing what they must to live their lives is proving impossible to manage.

Without significant government intervention or new technological innovations, demand for oil won't change any time soon. And certainly not in time for any of the publicly-stated climate preservation deadlines.

Energy Tidbits also covers the weather, just like those concerned about climate change. Except it follows cold, not just hot.

A very cold winter in Asia and Europe has caused natural gas prices to skyrocket.

Whatever renewables could or should be, they are not sufficiently effective in the northern hemisphere from October until March if demand spikes. So countries are importing liquified natural gas (LNG) at whatever price they must pay to keep the lights on and prevent people from freezing to death.

And Calgarians in their office towers read about Michigan, too, where Democratic Gov. Gretchen Whitmer has ordered Enbridge's Line 5 to be shut down in May.

This legacy pipeline has given Alberta the shortest route to the refineries in Sarnia, Ont., and in Montreal for decades. It starts in Edmonton and passes through North Dakota, Minnesota, Wisconsin and Michigan. This route was not a problem for the regulators in 1953.

The current capacity is about 540,000 barrels each day, nearly one-third of Canadian oil consumption. But it goes under the Straits of Mackinac, the confluence of Lake Michigan and Lake Huron. It doesn't leak. Never has. But it could. So it must go.

Closing Line 5 would be devastating for all of Canada, not just Alberta.

Eastern refineries and consumers would be at the mercy of imports from the United States or tankers coming through the St. Lawrence Seaway from the Middle East. Alberta producers are making contingency plans to keep their Canadian refineries supplied by rail or tankers across Lake Superior.

Other major issues the dinosaurs in Calgary follow carefully are the politics of Libya, Venezuela and Iran. Major oil producers all, they have taken hundreds of millions of barrels off the market because of civil war, political chaos or sanctions to prevent the development of nuclear weapons.

The politics of each of these countries affects the world price of oil, the price at the gas pumps, and the economic future of Canada's Calgary-headquartered petroleum industry.

So if Calgary remains out of step with the way so many Canadians want to go, please understand why. They are hardwired into the global energy complex and domestic politics.

Real progress on achievable global climate change goals would be further advanced if the rest of Canada was as well.

David Yager is a Calgary oil executive, writer and author. His book, From Miracle to Menace — Alberta, A Carbon Story, was released in 2019. 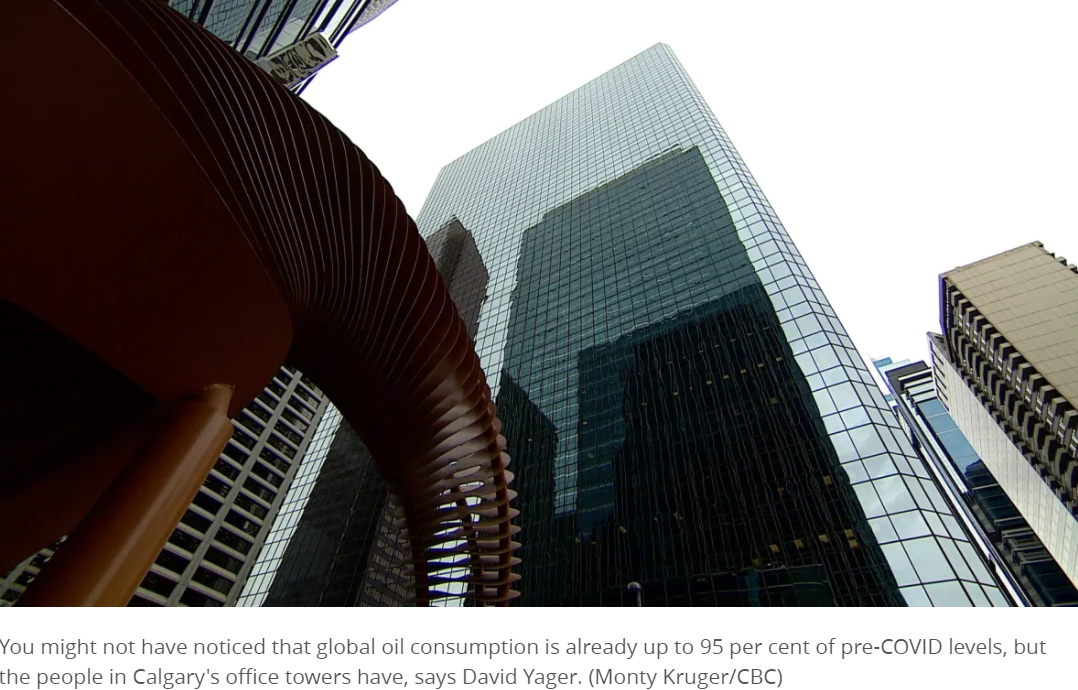