I am a Saskatchewan rancher, and I fear for the lives of my family and our employees. This may sound far-fetched in a country like Canada; we are far from the crime rates of big cities, and generally lead very peaceful, if isolated, lives.

Yet every year, as November approaches, so does the anxiety that accompanies hunting season.

"Even with a picture of trespassers on our land, the reality of the "no hunting" sign laying on the ground, rather than nailed to the fence post, gives the offending hunters the legal ‘out’ they need."

Saskatchewan is one of the last provinces not to require expressed permission to access land. This includes access for hunting and other forms of recreation, which means the landowner must post “no hunting” and “no trespassing” signs to deter intrusions.

The typical and idyllic picture of cattle grazing the countryside is no longer applicable during white-tail deer season, which runs from September to December. Now, hunting season means that cattle are nervous and fearful. They are difficult to work with because the sound of firearms can be heard popping throughout the day, every day. The herds are driven through and stirred up by strange vehicles, and much of the time they are on the run because holes in fences have become the norm.

The worst part is that I understand completely how the cattle feel because I am also afraid.

As ranchers and landowners, we have seen a steady increase in misuse of our land, leading not only to concerns for property and livestock safety but for human safety.

In our area of Saskatchewan, the unethical few have given all hunters a bad reputation.

What began as small annoyances on farming property—gates left open or livestock disturbed—have escalated into far more serious concerns. Open gates are now minor complaints—in fact, we applaud those who actually choose to use a gate, rather than drive through the fence.

Several years ago, we took the time and expense to post “no hunting” across the entirety of our ranch. This is a considerable job, one that takes weeks of labour and hundreds of signs. As feared, it didn't solve the problem.

Take a moment and imagine yourself as a rancher. Your fence in one of the pastures is down and must be fixed to keep your cattle safe. This broken section of fence happens to be in a poplar tree bluff, a beautiful little sheltered area that is usually a peaceful spot to work in. While out there, miles from the nearest person, you hear the roar of a truck engine followed by the slam of a door. As your brain processes what is happening, you hear the cracking of branches as a deer runs through the very bush you are standing in, and you recognize the trouble you are in. As guns are fired, you yell out, hoping whoever is shooting will hear you.

This story is not a story at all. It is a memory turned cautionary tale that is burned into our brains with all the permanence of any traumatic event. My husband was lucky to make it out of the trees that day without injury.

When he felt safe enough to emerge from the bluff that day, it was no surprise to find hunters standing there sheepishly holding their guns. The hunters, of course, did not have permission to be hunting on our land. They had not only driven through the fence to get to that spot, but one of the "no hunting" signs had mysteriously been knocked to the ground.

The worst part of this entire situation is not just fear in that moment and it is not the frustration from yet another fence driven through. By far, the worst part is the feeling of helplessness in knowing that it will continue to happen, possibly by these same offenders.

You see, even when hunters are caught in the act, the laws about hunting on private property in Saskatchewan are almost unenforceable. Even with a picture of trespassers on our land, the reality of the "no hunting sign" laying on the ground, rather than nailed to the fence post, gives the offending hunters the legal 'out' they need. It is a horrible feeling to know that you cannot protect yourself or your family from such situations.

Agriculture has changed significantly since our trespassing laws were originally created. Gone are the days when cattle were only on pasture for the short summer months. Today, our cattle graze 365 days per year. This means that farmers are also on the land, caring for their livestock for each of those 365 days.

Gone, too, are the days of small farms where the crop is harvested long before hunting season. Today, crops, both standing and swathed, are driven over and destroyed during hunting season. The agricultural world is changing, and our laws must change to keep everyone safe.

Changing and enforcing laws to keep both property and people safe is not intended to end or even hinder important activities such as hunting. Asking permission to enter and hunt upon privately owned land is not only a simple thing to do, it is also the ethical thing to do.

To those who do hunt ethically, we are grateful for your efforts and wish you happy trails.  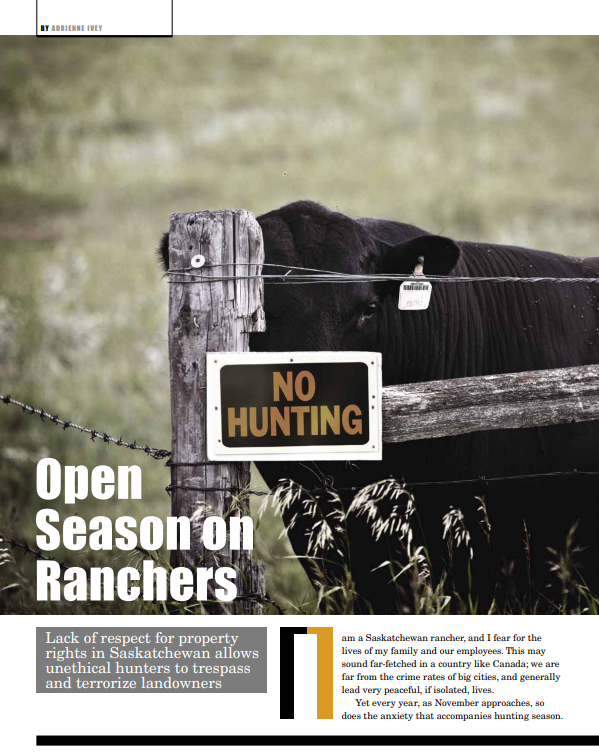 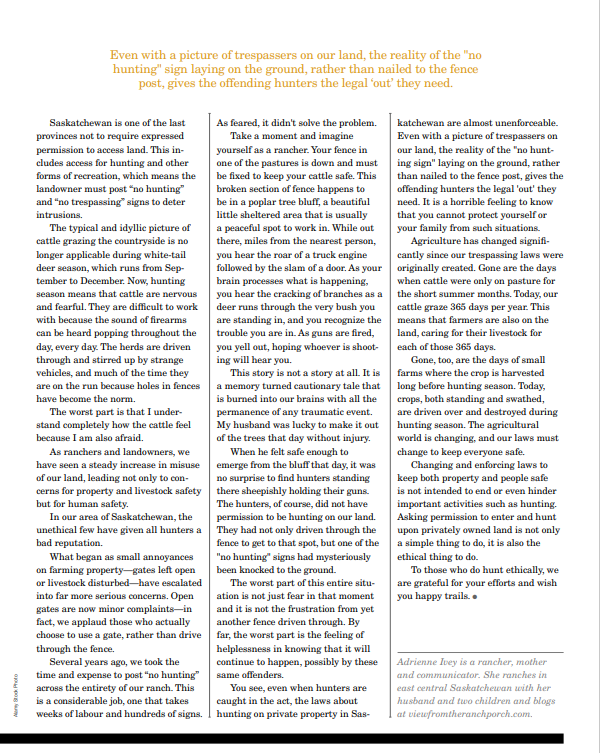 Adrienne Ivey is a rancher, mother and communicator. She ranches in east central Saskatchewan with her husband and two children and blogs at viewfromtheranchporch.com.