The rise of petroleum-powered transport was an environmental boon

"Nearly two thirds of the world’s refined petroleum products are now used in land, water and air transportation, accounting for nearly 95 per cent of all energy consumed in this sector."

Laura Ingalls Wilder’s The Long Winter is generally regarded as the most historically accurate book of her semi-autobiographical Little House on the Prairie series. The Long Winter tells the story of how the inhabitants of De Smet (present-day South Dakota) narrowly avoided starvation during the severe winter of 1880-81, when a series of blizzards dumped nearly three and a half metres of snow on the northern plains – immobilizing trains and cutting off the settlers from the rest of the world.

Faced with an imminent food shortage, Laura and her neighbours learned that a sizeable amount of wheat was available within 20 miles of their snow-covered houses. Her future husband, Almanzo Wilder, and a friend of his risked their lives in order to bring back enough food to sustain the townspeople through the rest of the winter. With the spring thaw, the railroad service was re-established and the Ingalls family enjoyed a long-delayed Christmas celebration in May.

The Long Winter is a valuable reminder of how lethal crop failures and geographical isolation could be before the advent of modern farming and transportation technologies. Not too long ago, subsistence farmers across the West had to cope with the “lean season” — the period of greatest scarcity before the first availability of new crops.

As some readers may know, in England the late spring (and especially the month of May) was once referred to as the “hungry gap” and the “starving time.” One problem was the cost and difficulty of moving heavy things over often muddy and impracticable dirt roads; three centuries ago, moving a ton of goods over 50 kilometres on land between, say, Liverpool and Manchester was as expensive as shipping them across the North Atlantic.

The development of coal-powered railroads and steamships revolutionized the lives of our ancestors. Among other positive developments, landlocked farmers could now specialize in what they did best and rely on other farmers and producers for their remaining needs. The result was not only more abundant food at ever-cheaper prices, but also the end of widespread famine and starvation as the surplus from regions with good harvests could now be shipped to those that had experienced mediocre ones. (Of course, a region that experienced a bumper crop one year might have a mediocre one the next.)

In time, petroleum-derived products such as diesel, gasoline, kerosene (jet fuel) and bunker fuels (used in container ships) displaced coal because of their higher energy density, cleaner combustion and greater ease of extraction, handling, transport and storage. Nearly two thirds of the world’s refined petroleum products are now used in land, water and air transportation, accounting for nearly 95 per cent of all energy consumed in this sector.

Despite much wishful thinking, there are simply no better alternatives to oil-powered transport at the moment. For instance, despite very generous governmental subsidies, battery electric, hybrid electric and plug-in hybrid vehicles have repeatedly failed to gain any meaningful market shares against gasoline-powered cars. This is because of their limited range and power, long charging time, bad performance in cold weather, security concerns (especially in collisions) and inadequate electricity production and delivery infrastructure.

While the convenience of cars is obvious, few people grasp their historical significance in terms of public health and environmental benefits.

The best historical anecdote on the topic goes something like this. In 1898, delegates from across the globe gathered in New York City for the world’s first international urban-planning conference. The topic that dominated discussions was not infrastructure, housing or even land use, but horse manure.

The problem was that just as a large number of people had moved to cities from the countryside, so had powerful workhorses, each one of them producing between 15 and 30 pounds of manure and one quart of urine every day. For New York, this meant well over four million pounds of manure each day, prompting claims that by 1930 it would rise to Manhattan’s third storey.

At about the same time, a contributor to The Times in London estimated that by 1950 every street in London would be buried nine-feet deep in horse manure. Unable to think of any solution, the New York delegates called it quits after three days, as they concluded that urban living was inherently unsustainable.

Paradoxically, much of the urban-manure problem had been created by the advent of the railroad, and other technologies such as canning and refrigeration. On the one hand, it had cut into the profitability of manure-consuming farms, located near cities, by delivering cheaper perishable goods (fruits, vegetables, meat and dairy products) from locations that benefited from better soil and climate.

On the other, because rail transport was not flexible enough to handle final deliveries, railroad companies often owned the largest fleets of urban horses.

Apart from their stench, urban stables and the manure piles that filled practically every vacant lot were prime breeding grounds for house-flies, perhaps three billion of which hatched each day in American cities at the turn of the 20th century. With flies came outbreaks of deadly infectious diseases, such as typhoid and yellow fever, cholera and diphtheria.

Workhorses’ skittishness in heavy traffic also meant that they stampeded, kicked, bit and trampled bystanders. According to one estimate, the fatality rate per capita in urban traffic was roughly 75 per cent higher in the horse era than today. The clatter of horseshoes and wagon wheels on cobblestone pavement was also incredibly noisy.

They also created significant traffic congestion, because a horse and wagon occupied more street space than a modern truck, while a badly injured horse would typically be shot on the spot or abandoned to die on the road, creating a major obstruction that was difficult to remove in an age without tow trucks. (Indeed, street cleaners often waited for the corpses to putrefy so they could be sawed into pieces and carted off with greater ease.)

The impact of urban workhorses was also felt in the countryside. First, workhorses ate a lot of oats and hay. One contemporary British farmer calculated that one workhorse would consume the produce of five acres of land, which could have fed six to eight human beings. In the words of transportation historian Eric Morris: “Directly or indirectly, feeding the horse meant placing new land under cultivation, clearing it of its natural animal life and vegetation, and sometimes diverting water to irrigate it, with considerable negative effects on the natural ecosystem.”

So, while early 20th-century cars were noisy and polluting by today’s standards, they were a significant improvement on the alternatives. In later decades, advances such as the removal of lead from gasoline and the development of catalytic converters would essentially eliminate their more problematic features. Although not completely green, today’s petroleum-powered cars remain one of humanity’s most underappreciated environmental successes.

Railroads, ships and trucks also delivered significant environmental benefits. One longstanding problem, as the Marxist theorist Karl Kautsky observed in his 1899 classic The Agrarian Question, was that as “long as any rural economy is self-sufficient it has to produce everything which it needs, irrespective of whether the soil is suitable or not. Grain has to be cultivated on infertile, stony and steeply sloping ground as well as on rich soils.”

In many locations without much prime agricultural land, primitive technologies ensured not only that at least 40 acres and a mule were required to sustain a household, but also that much environmental damage, primarily in the form of soil erosion, was done in the process. Fortunately, Kautsky observed, modern transportation had made possible the development of regions like the Canadian Prairies and brought much relief to poorer soils in Europe, where more suitable forms of food production, such as cultivating orchards, rearing beef cattle and dairy farming, could now be practised sustainably.

Over time, the concentration of food production in the world’s best locations allowed a lot of marginal agricultural land to revert to a wild state. For instance, France saw its forest area expand by one third between 1830 and 1960, and by a further quarter since 1960. This so-called “forest transition” occurred in the context of a doubling of the French population and a dramatic increase in standards of living.

Reforestation — or an improvement in the quality of the forest cover in countries such as Japan where it has no room to expand — has similarly occurred in all major temperate and boreal forests. Every country with a per-capita GDP now exceeding $4,600 — roughly equal to that of Chile — has experienced this, as have some developing economies ranging from China and India to Bangladesh and Vietnam. (Of course, the replacement of firewood and charcoal with coal, kerosene, heavy oil and natural gas was also significant.)

The modern logistics industry further allowed the production and export of food from locations where water is abundant to consumers living in regions where it isn’t, thus preventing the depletion of surface waters and aquifers in drier parts of the world. It also made possible a drastic increase in the size of our cities.

In the words of economist Ed Glaeser: “Residing in a forest might seem to be a good way of showing one’s love of nature, but living in a concrete jungle is actually far more ecologically friendly…. If you love nature, stay away from it.”

To put things in perspective, cities now occupy between two and three per cent of the Earth’s surface, an area that is expected to double in the next half century. And in roughly half of the world today, far more agricultural land has been reverting to wilderness than has been converted to suburbia.

Unfortunately, activists are often blind to the environmental benefits of petroleum-powered transportation. Countless local-food activists have embraced the notion of “food miles” — the distance food items travel from farms to consumers — as the be-all and end-all of sustainable development.

However, as has been repeatedly and rigorously documented in numerous studies, the distance travelled by food is unimportant. For one thing, producing food typically requires much more energy than moving it around, especially when significant amounts of heating and/or cold-protection technologies, irrigation water, fertilizers, pesticides and other inputs are required to grow things in one region but not in another. Reducing food miles in such circumstances actually means a greater environmental impact.

The distance travelled by food also matters less than the mode of transportation used. For instance, moving food halfway around the world on a container ship often has a smaller footprint per item carried than a short trip by car to a grocery store to buy a small quantity of these items.

To most of us, the notion that we can have our cake and eat it too is mind-boggling. Yet, in many respects, this is what petroleum products in general and modern transportation technologies in particular have actually delivered. Until something truly better comes along, they remain essential for the creation of a wealthier, cleaner and more sustainable world. 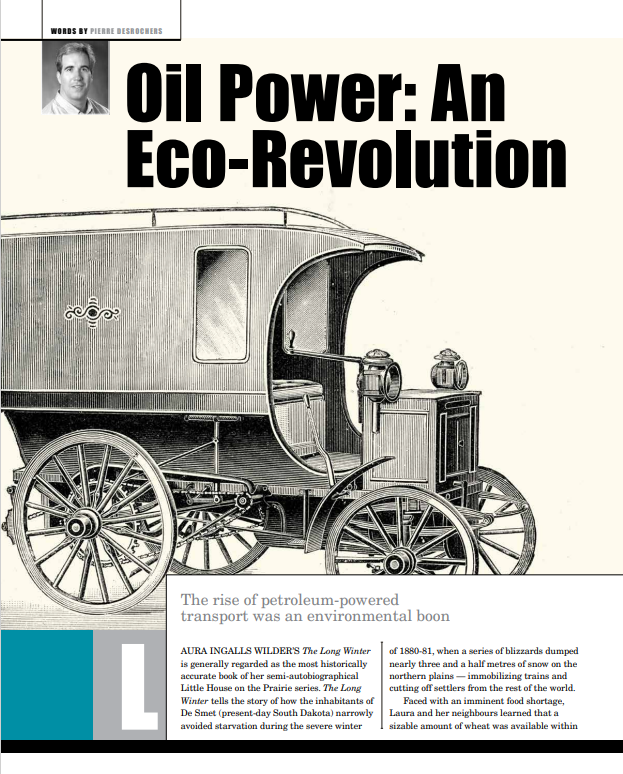 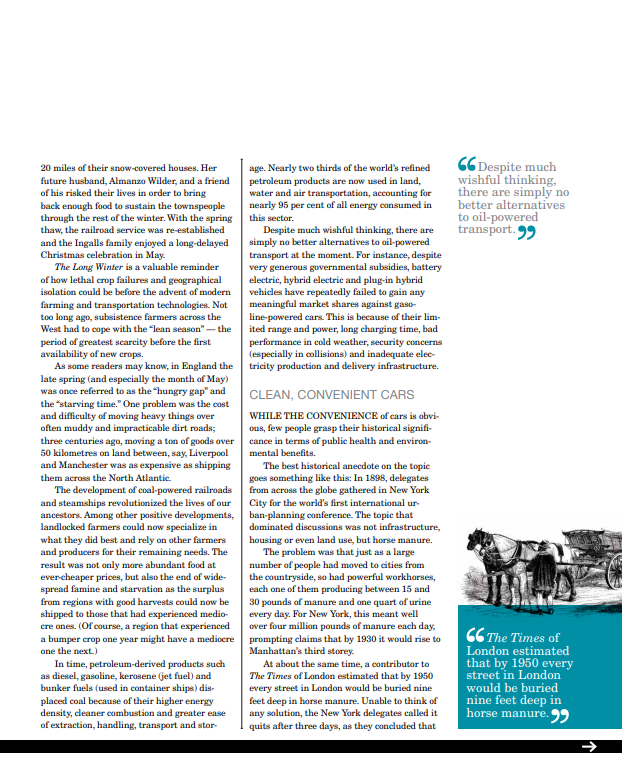 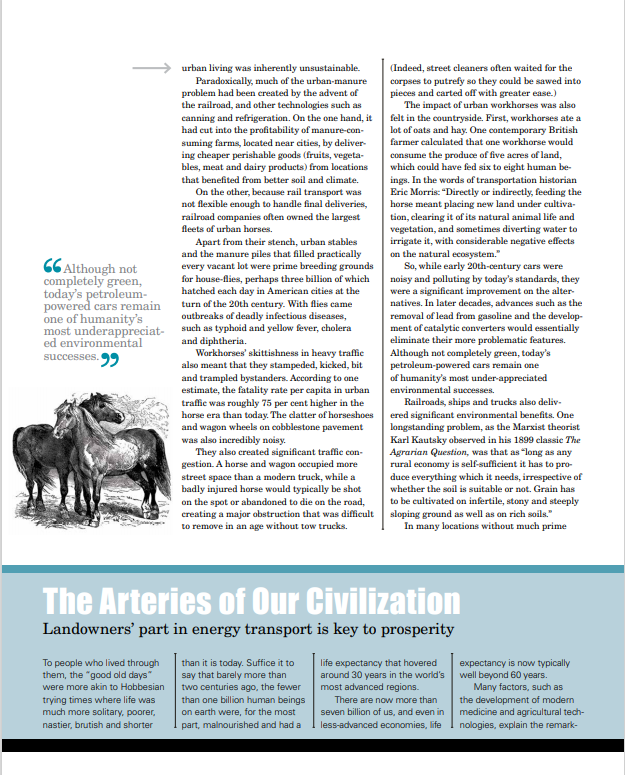 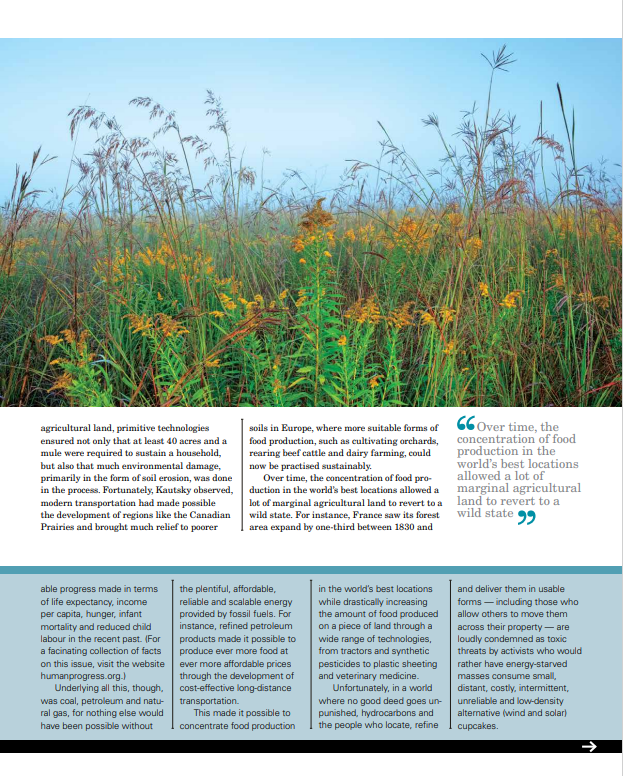 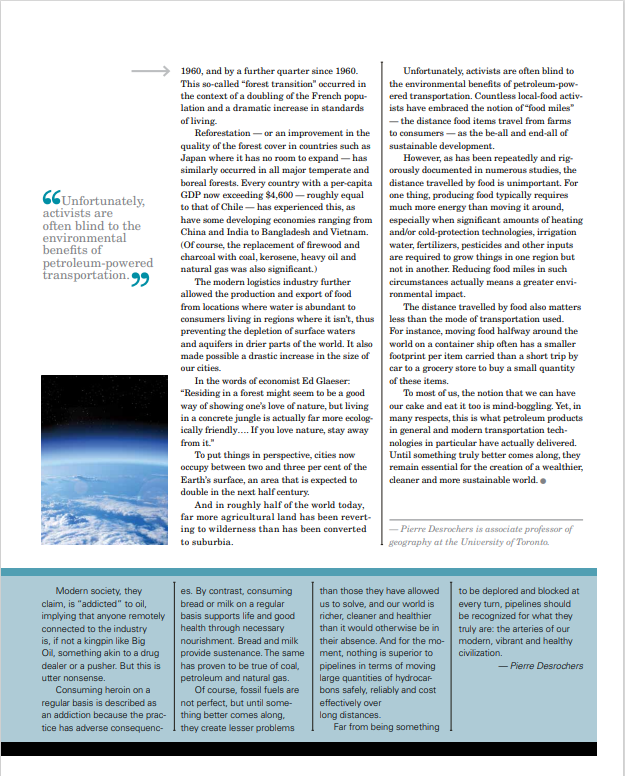