CAEPLA has long viewed Northern Gateway as preferable to the TransMountain expansion project, which was nationalized by the Trudeau Liberals in 2018.

Conservative Leader Erin O’Toole said Monday he supports building the cancelled Northern Gateway oil pipeline largely because it would provide Indigenous communities in favour of the project with economic opportunities.

Pipelines and climate change have predictably emerged as issues on the campaign trail ahead of the Sept. 20 election, with O’Toole trying to convince voters who are skeptical of the Conservatives’ environmental record that under him, the party takes the issue seriously.

O’Toole touted the Trans Mountain pipeline expansion and dead Northern Gateway pipeline as priority projects if he forms government during a Sunday evening interview on Radio-Canada.

While he honed in on First Nations who inked agreements to get 33 per cent ownership in the latter Enbridge pipeline — which proposed carrying oil from Alberta’s oilsands to British Columbia’s coast — he didn’t explain how he would get the project built, given the fierce opposition it faced from those worried about potential environmental harms.

Eight First Nations, four environmental groups and one labour union challenged the project in the Federal Court of Appeal, which overturned Ottawa’s approval of the pipeline in 2016 due to lack of Indigenous consultation.

“I would like to see intergenerational transfer of wealth and opportunity after generations of trauma-transfer,” said O’Toole, standing in front of fields at an animal rescue after announcing plans to ban puppy mills and cosmetic testing on animals in King City, Ont.

The Conservative leader characterized Northern Gateway as a way to bolster “economic reconciliation” with Indigenous communities.

Before O’Toole stepped behind a microphone to make Monday’s announcement and field questions, Liberal candidate Steven Guilbeault took to Twitter to point out the Tories’ history of running candidates who question the role humans played in causing climate change.

Most recently, longtime Ontario MP Cheryl Gallant created problems for O’Toole after it was revealed she sent correspondence to constituents in her riding warning of a pending “climate emergency lockdown” under a re-elected Trudeau government. She had also earlier posted a video, which has since been removed, that included a cropped photo showing what appeared to be a noose around Trudeau’s neck.

The Conservative leader sidestepped questions about Gallant’s and other candidates’ climate beliefs on Monday, repeating that he expects all of his candidates to agree with his party’s election platform or not sit in his caucus.

O’Toole has also faced criticism from environmental and other climate groups for sticking with a goal of reducing Canada’s greenhouse gas emissions to 30 per cent below 2005 levels by 2030, rather than adopt a target recently increased by the Liberals to between 40 and 45 per cent. The government submitted the new goal to the United Nations ahead of an international climate change conference this fall.

Even with a lower upfront target, O’Toole confirmed he believed in getting Canada to reach net-zero emissions by 2050, a goal recently enshrined into law by Parliament before it broke for summer.

His position appears to run counter to findings from the Paris-based International Energy Agency that called for no new oil, gas or coal projects from countries if they want to slash emissions to hit net-zero by mid-century.

O’Toole argued that Canada’s energy sector is an environmental and social leader, so “over time” as a lower-carbon future materializes, democratic countries should be using Canadian resources, not those from Saudi Arabia, Venezuela or Russia.

The Conservatives voted against putting the Liberals’ net-zero goal into legislation, citing concerns it could have consequences for Western Canada’s oil and gas sector. The Liberals haven’t yet detailed how they would meet their objective.

O’Toole spent Monday campaigning in the Greater Toronto Area, where was set to greet supporters at an evening event and visited a bakery in the afternoon in Markham, Ont.

During the visit where he spoke with bakery staff and about a dozen or so supporters gathered outside, he acknowledged his campaign had picked up momentum entering its third week, but there was much more work to do. 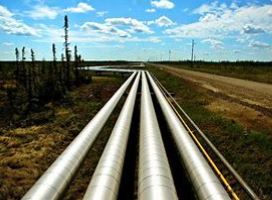