Northern Gateway Could Have Prevented This

Pipelines are the safest way to move oil and gas. 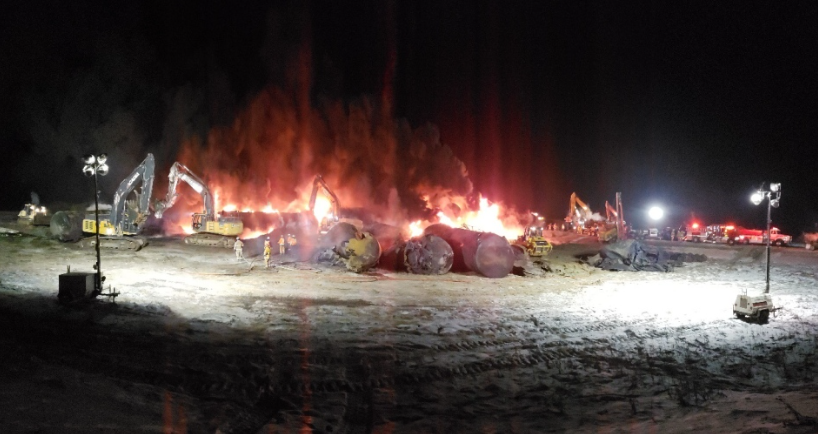 SASKATOON -- About 1.5 million litres of crude oil spilled during a train derailment in rural Saskatchewan, according to early findings by the Transportation Safety Board (TSB).

That’s more than the 2016 Husky Energy spill, in which 225,000 litres of diluted heavy oil spilled from Husky's pipeline near Maidstone.

On Monday at midnight, 33 CP train cars went off the track near Guernsey.

About 20 tank cars were breached, released product and sparked a “large pool of fire which burned for approximately 24 hours,” TSB investigators wrote in their preliminary findings report.

The derailment ended up in a large pile, spanning a distance of about 500 meters, TSB investigators say.

Just before the crash, the train’s emergency brake was activated. Investigators are still working on determining why.

Investigators determined the two-person train crew, a locomotive engineer and conductor, were both “qualified for their positions and fit for duty.”

Six TSB investigators will remain at the scene, examining the wreckage. All 33 derailed tank cars will be examined.

CP said the cleanup efforts are ongoing, and crews will likely be at the site for several weeks.

“Crews are working diligently to ensure the area is cleaned up and restored,” CP spokesperson Andy Cummings wrote in an email to CTV News.

CP re-opened the rail line Tuesday morning and roads around the area are no longer blocked off.