No Way to Get Pipelines Built

Ottawa has no business owning and operating TMX

Conservative Leader Andrew Scheer has claimed that if he were prime minister, he would build the Trans Mountain pipeline by invoking constitutional powers and banning foreign funding from being used to oppose the project.

According to Tom Flanagan, professor emeritus of political science at the University of Calgary, problems with compulsory consultations and the acquisition of contiguous land can be overcome by expropriation.

While acknowledging that expropriation is not a perfect process, Flanagan asserts that, without it, “We would not have many pipelines, power lines, roads, bridges, or rapid transit lines—plus any number of non-corridor projects like hospitals and parks—making it difficult even to imagine modern technological society.”

"Government doesn’t produce infrastructure. Instead, it uses legalized force and taxpayer transfers to hire contracting companies to build and maintain it."

Common thinking is that without coercive power of government in Canada, there would be few or no pipelines, power lines, roads, bridges and so on. There would be firms extracting oil and gas where these resources are located, generators of electricity located elsewhere, suppliers of all other goods and services throughout the country and your house somewhere in the mix—and every private citizen involved would be standing around, thoroughly confused.

How are things to get from where they are to where, when and what final consumers want them to be?

There are plenty of incentives for people to build pipelines, power lines, roads, bridges, rapid transit lines, hospitals and parks. But government interventionism stifles the ability and capability of private provision. The Trans Mountain pipeline expansion offers a recent and dramatic example.

Two days before Kinder Morgan Canada’s May 31 (2018) deadline for assurance that the company would actually be able to build its planned Trans Mountain pipeline expansion project, (TMX) the federal government announced it would buy the whole project for $4.5 billion. The headline price tag did not include the cost to actually build the second pipeline, which the federal government committed to do. Construction costs for the 1,150-kilometre twinning project could be as high as $9.3 billion.

On August 30, the same day Kinder Morgan Canada shareholders voted 99 per cent in favour of selling the pipeline and expansion project to the Canadian government, the Federal Court of Appeal overturned the federal government’s approval for TMX. Construction on the project was halted, and the project returned to a review phase for the purpose of assessing the impacts of tanker traffic and to consult more extensively with Indigenous communities.

Canadians are witnessing yet another unfortunate example of how free enterprise produces vehicles, appliances and other consumer goods faster than our government can build pipelines, transmission lines, roads, schools, parks and hospitals. The belief that only government can furnish these goods is fallacious. The means to provide them is not limited to legislated takings by way of taxes, regulations and expropriation. In fact, government doesn’t produce infrastructure. Instead, it uses legalized force and taxpayer transfers to hire contracting companies to build and maintain it.

And even here, governments are at a competitive disadvantage. At an increasing rate, infrastructure assets that deliver goods and services are being privatized, from health care to the movement of passengers and freight across toll roads and rail networks to the distribution of energy and other products through ports and pipelines.

The reason for this privatization is purely economic: central planning and government ownership cannot improve upon the self-regulating nature of market processes and private ownership in determining how resources are allocated based on individuals acting in their own self-interest.  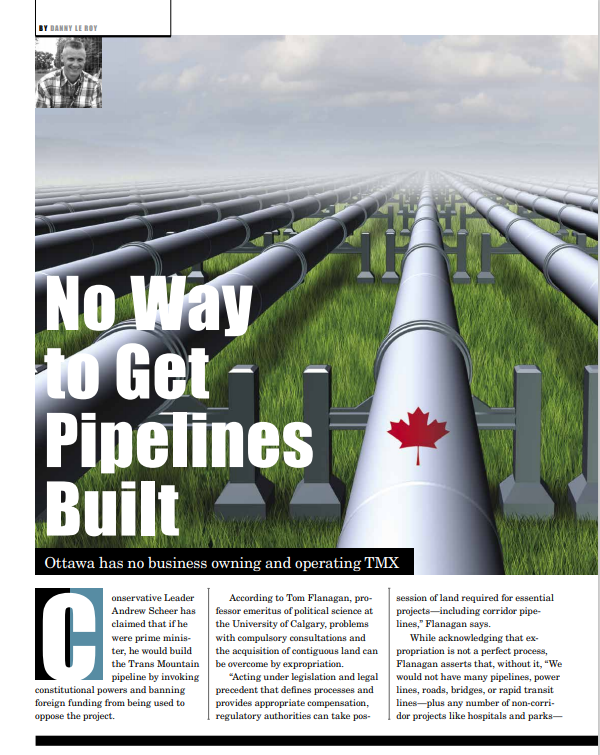 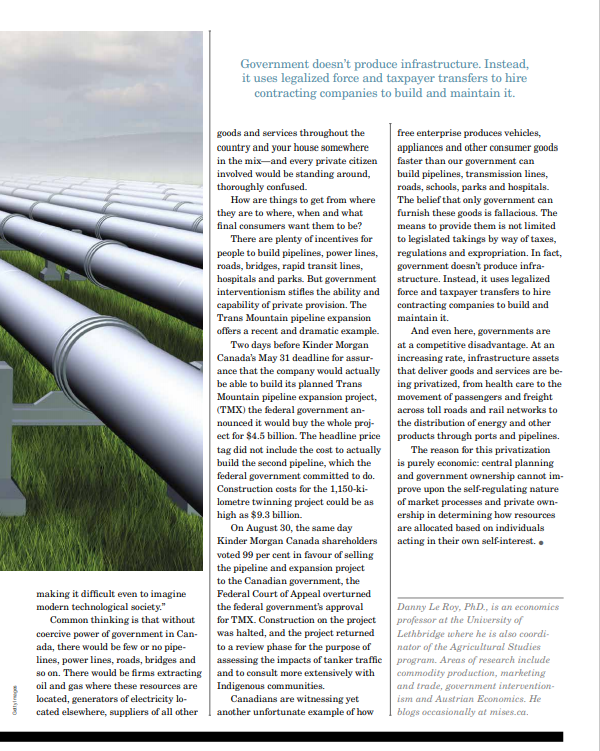 Danny Le Roy, PhD., is an economics professor at the University of
Lethbridge where he is also coordinator of the Agricultural Studies program. Areas of research include commodity production, marketing and trade, government interventionism and Austrian Economics. He blogs occasionally at mises.ca.