No Skin in the Game

CAEPLA has been making the case in the pages of Pipeline Observer for some time now that regulatory regimes like the National Energy Board are the very opposite of what they promise.

We believe that industry and landowners alike both become better actors as partners when property rights are respected and both are accountable to the market and courts.

Unfortunately, property rights are not really legally or politically recognized in Canada. What we are left with is a distant dysfunctional NEB that itself appears ready to be replaced by something even less fair and effective.

In his latest book, Skin in the Game: Hidden Asymmetries in Daily Life, Taleb talks about how a lack of risk for participants in any transaction in life results in the worst outcomes not only for society, but for those who do face risk—who have “skin in the game.”

Under the current system, landowners are confronted by a constellation of regulatory bureaucrats, lawyers, industry land agents, activists, politicians and others who all have no personal stake in their dealings with them. They all get paid at the end of the day, win or lose, while landowners are saddled with lowball offers, liability and flat-out bad deals they never had the power to refuse.

In the following excerpt, Taleb provides some insight into how and why regulatory regimes result in the outcomes with which landowners are all too familiar.

There are two ways to make citizens safe from large predators, say, big powerful corporations. The first one is to enact regulations—but these, aside from restricting individual freedoms, lead to another predation, this time by the state, its agents and their cronies. More critically, people with good lawyers can game regulations (or, as we shall see, make it known that they hire former regulators, and overpay for them, which signals a prospective bribe to those currently in office).

And of course regulations, once in, stay in and even when they are proven absurd politicians are afraid of repealing them, under pressure from those benefiting from them. Given that regulations are addictive, we soon end up tangled in complicated rules that choke enterprise. They also choke life.

For there are always parasites benefiting from regulation, situations where the businessperson uses government to derive profit, often through protective regulations and franchises. The mechanism is called regulatory recapture, as it cancels the effect of what a regulation was meant to do.

The other solution is to put skin in the game in transactions, in the form of legal liability, and the possibility of an efficient lawsuit. The Anglo-Saxon world has traditionally had a predilection for the legal approach instead of the regulatory one: if you harm me, I can sue you. This has led to the very sophisticated, adaptive and balanced common law, built bottom-up via trial and error. When people transact, they almost always prefer to agree (as part of the contract) on a Commonwealth (or formerly British-ruled) venue as the forum in the event of a dispute: Hong Kong and Singapore are the favourites in Asia, London and New York in the West. Common law is about the spirit, while regulation, owing to its rigidity, is all about the letter.

This doesn’t mean one should never regulate at all. Some systemic effects may require regulation (say, hidden tail risks of environmental ruins that show up too late). If you can’t effectively sue, regulate.

Now, even if regulations had a small net payoff for society, I would still prefer to be as free as possible, but assume my civil responsibility, face my fate and pay the penalty if I harm others. This attitude is called deontic libertarianism (deontic comes from “duties”): by regulating you are robbing people of freedom.

Some of us believe that freedom is one’s first most essential good. This includes the freedom to make mistakes (those that harm only you); it is sacred to the point that it must never be traded against economic or other benefits. 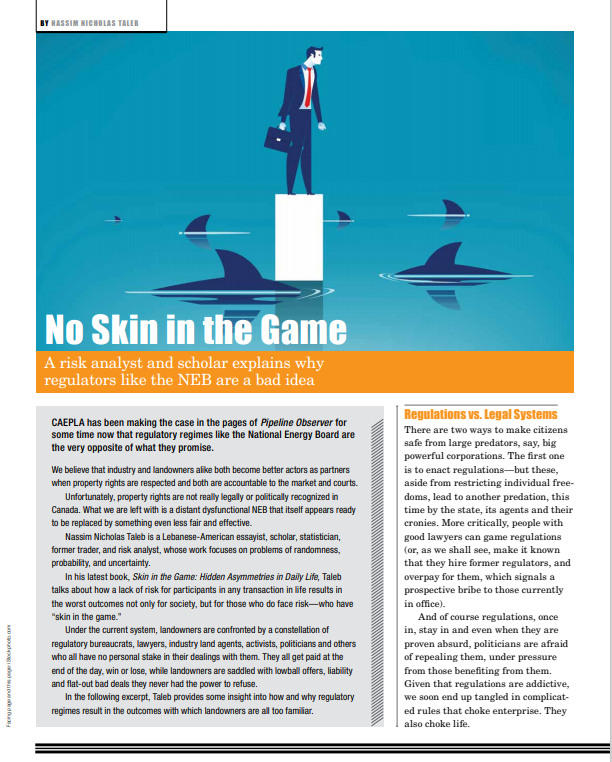 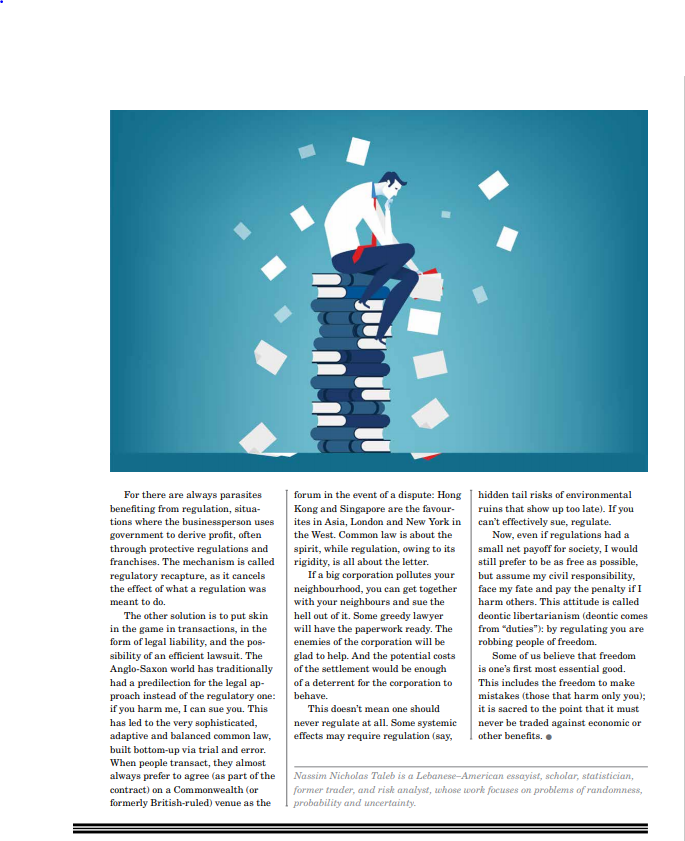