No Defense Against Expropriation

City Council in London, Ontario will likely expropriate Nan Finlayson’s property at 100 Stanley Street in order to replace a rail bridge and widen a road. Nan is retired, loves her property, and does not wish to move. Her predicament raises two important issues: first and foremost, the right to own property, and second, the supposed economic benefits of government road management.

The Right to Own Property

In Canada, all land is owned by the Crown and administered by the government. Private landowners are not owners at all, but mere tenants. Even in countries where private landownership appears customary, this is a mirage because governments still claim the right to expropriate land (i.e. eminent domain). Thus, individuals cannot consider themselves to be genuine owners of land. Instead, land is effectively owned by abstract entities such as the government or the Crown.

“Nature, or rather God, has bestowed upon every one of us the right to defend his person, his liberty, and his property, since these are the three constituent or preserving elements of life.”

These abstract entities own the land, ostensibly on behalf of the public, which consists of living, breathing entities—individual humans—who find it impossible to exercise their respective, theoretical, tiny fractional ownership of land. Clearly, the concept of public ownership is a convenient government construct which allows politicians and bureaucrats to make politically expedient decisions on behalf of special interest groups, such as developers and government contractors. The economic benefits granted to these groups (the 1 per cent) come at the expense of the general public (the 99 per cent), on whose behalf the government is supposedly administering the land. This is a corrupt system. As the economist and historian Murray Rothbard wrote in his book, Man, Economy, and State “… when the government confers a privilege of eminent domain … it has virtually granted a license for theft.”

Individuals must have the right to own property, including land, with absolute authority over its use, as long as they do not harm the property of others. This concept of ownership creates the greatest incentive for individuals to acquire and use property to increase their prosperity, which invariably increases the prosperity of others. Studies show that free markets produce high living standards, but free markets rest on property rights. In William Gairdner’s book, The Trouble with Canada ... Still!: A Citizen Speaks Out, he describes the economic benefits of property ownership:

“Private family garden plots in the former Soviet Union, which totalled only 3 per cent of all cultivated land there, produced an astonishing 27 per cent of that country’s total farm output. This also explains why virtually all commune experiments eventually transform into property-based organizations, or fail outright.”

What is the point of having a right to own property – books, shoes, a home, or anything whatsoever that could be considered “ours” – if we cannot freely decide what to do with them?

This understanding is the reason so many Canadians were upset when this ancient and hallowed common law right to own private property was intentionally left out of Canada’s Charter [of Rights and Freedoms] in 1982 by Trudeau and all the first ministers. They left it out because the most socialist of them all, NDP leader Ed Broadbent, insisted they do so as his price for signing. He worried that a right to private property would hamper the government’s ability to expropriate private property. Precisely. If Trudeau had not been so socialist himself, he would never have agreed.”

Individuals must have the right to own property, including land, with absolute authority over how it will be used, as long as they do no harm to the property of others.

I would be imprisoned if I stole Finlayson’s property, but government land expropriation is considered legal. When the government does something which it claims to be legal yet claims the same act to be illegal when initiated by an ordinary citizen, we find ourselves on a very slippery slope. In his essay “The Law”, Frédéric Bastiat warned us about this pernicious ideology:

“Nature, or rather God, has bestowed upon every one of us the right to defend his person, his liberty, and his property, since these are the three constituent or preserving elements of life.

Collective right, then, has its principle, its reason for existing, its lawfulness, in individual right; and the common force cannot rationally have any other end, or any other mission, than that of the isolated forces for which it is substituted. Thus, as the force of an individual cannot lawfully touch the person, the liberty, or the property of another individual – for the same reason, the common force cannot lawfully be used to destroy the person, the liberty, or the property of individuals or of classes.

When law and morality are in contradiction to each other, the citizen finds himself in the cruel alternative of either losing his moral sense, or of losing his respect for the law – two evils of equal magnitude, between which it would be difficult to choose.

Unhappily, law is by no means confined to its own sphere. … It has acted in direct opposition to its proper end … it has been employed in annihilating that justice which it ought to have established … it has placed the collective force in the service of those who wish to traffic, without risk and without scruple, in the persons, the liberty, and the property of others; it has converted plunder into a right, that it may protect it, and lawful defense into a crime, that it may punish it…”

For all their talk about the evils of inequality, politicians remain silent about inequality before the law.

Following a 23-year career in the Canadian financial industry, Lee Friday has spent many years studying economics, politics, and social issues. He operates a news site at www.LondonNews1.com 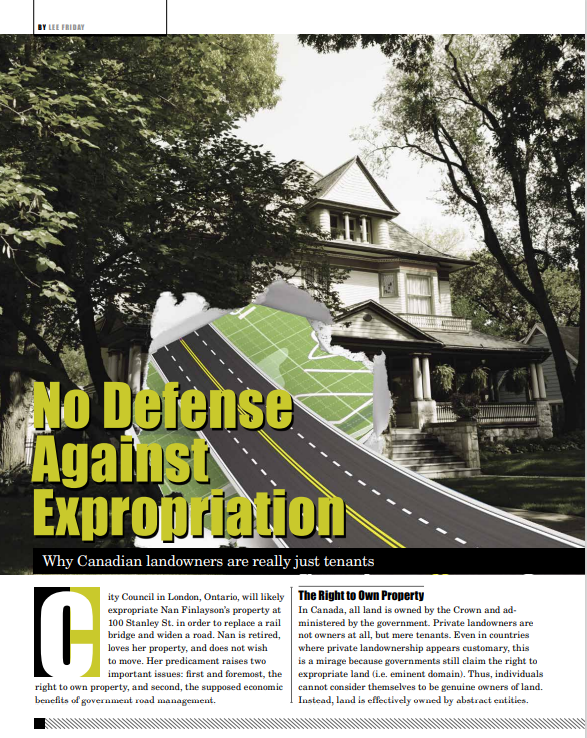 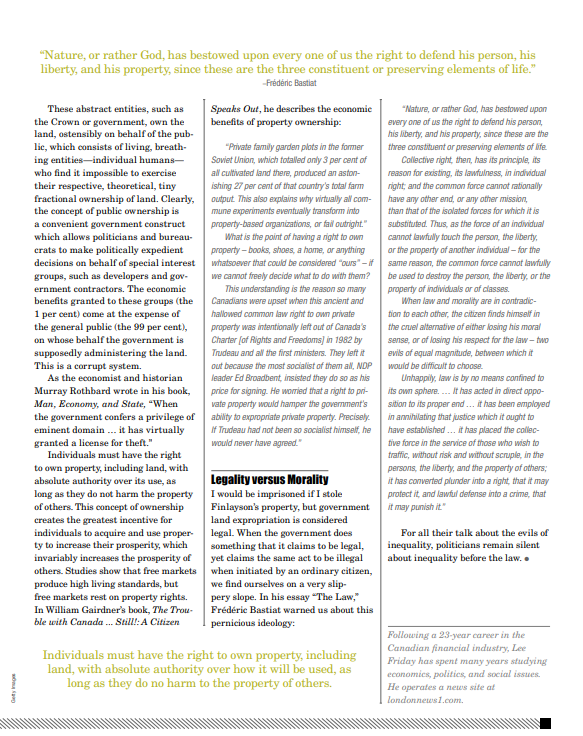