A New Generation of Green Technology

Kelcie Miller-Anderson is a woman who knows she wants. And with the backing of some big players, the Albertan is headed east to get it.

Here's the dirt: since she was a teenager, Miller-Anderson was fascinated with the environment. Growing up in Alberta, she was intrigued by complexities and challenges of the oil industry. That passion mushroomed, so to speak, and ultimately led to ample research and the creation of her response to some of those challenges. Miller-Anderson created MycoRemedy, a product designed to tackle environmental contamination.

“I have been really passionate about developing new technologies for remediation, also clean technologies,” Miller-Anderson says. “We want to make remediation natural again. We don't feel the need for all these energy-intensive remediation options that use a lot of energy and chemical inputs.”

Four years into her environmental sciences and conservation biology degree at the University of Alberta, the 21-year-old is taking a hiatus. But she will be far from idle. Instead, Miller-Anderson, along with co-founder Aliya Dossa, a University of British Columbia economics grad, are Toronto-bound to get their venture off the ground.

Harnessing “nature's way,” the company's MycoMats use mycelium, the living body of mushrooms, to digest contaminants such as residual hydrocarbons or high salt concentrations in soil.

Made of mycelium grown on a straw substrate, the mats are rolled out and installed into soil.

In the case of contamination, mycelium acts as a decomposer by releasing enzymes to break down decaying matter in the ecosystem. It will grow out of the mats and into the soil, doing crucial reclamation and improving soil quality.

“It is 100% natural and effective remediation,” Miller-Anderson says. “The really cool thing about our technology is that it is a lot cheaper than current technology out there.”

And she can back that claim. Miller-Anderson compared her MycoRemedy method to a traditional dig-and dump-elsewhere scenario for a clean up of a 17,000-cubic-metre site contaminated with hydrocarbons in Red Deer.

“Based on our calculations, our method is 83% cheaper and 99% faster,” she says. “And it is 100% environmentally-friendly, biodegradable and natural.”

Like many Alberta kids, Miller-Anderson grew up enjoying the great outdoors and was exposed to news reports talking about the big, bad oil industry and images of innocent birds coated in oil. Unlike many, however, she was inspired to make a difference. She believes that might be why, despite her youth, her work resonates with some.

"Mycelium acts as a decomposer by releasing enzymes to break down decaying matter in the ecosystem."

“You tend to hear a lot of negative things and focus on the environmental problems and I feel sometimes (people) don't take the whole picture into perspective, like the economic impacts,” she says. “I think it's totally acceptable to have any belief on oil sands or fracking or things like that but it's important to become educated rather than just take everything you hear as truths. We wanted to see if we could solve some of the big concerns and create solutions.”

Miller-Anderson is currently developing different prototypes and hoping to have the first installations operational by June 2016. The next focus for MycoRemedy is to secure clients and more seed funding. Miller-Anderson and her partner are part of The Next 36 program, which aims to fast-track the upcoming generation of “Canada's most talented young innovators.”

The two young women are tickled to be given such an amazing opportunity, which includes access to coaching from mentors and investors. “The Next 36 gives us a lot of confidence,” says Miller-Anderson, who seems like she’s always had that in spades. She suspects her can-do attitude is an advantage.

“I think at the start people were a little skeptical,” she says. “I was just this young kid reaching out to oil companies looking for tailings material. But everyone has been really helpful and very interested and receptive.”

She also believes passion like hers, especially shown by a Millennial, is refreshing. “I think it's kind of like a breath of fresh air to see young people really, actually trying to solve the problems,” she says. “We are not just boycotting or highlighting the problems.”

In order to be part of the solution, not part of the problem, Miller-Anderson tries to keep her own footprint small, walking whenever she can and practicing vegetarianism because, as she says, “A plant-based diet can be more sustainable.”

Mushrooms have attracted attention globally for their utility in eating plastic and decomposing Styrofoam; they’re being looked at as a potential clean-up tool post nuclear plant meltdowns. “To me mushrooms and fungi are really nature's decomposers,” Miller-Anderson says. “I think this type of technology will start to take off in the next few years.”

One side-effect of her work:  mushrooms are not on the menu. “I actually don't eat mushrooms, which probably seems strange,” Miller-Anderson says. “Seeing mushrooms being able to digest hydrocarbons and naphthenic acids ... obviously it's amazing, but I really don't think of them as food. I think of them in terms of what they are able to do.”

Can fungi make fear of pipeline spills a thing of the past?

MycoRemedy provides a 100% natural and effective solution to the contamination resulting from pipeline leaks and spills. The best part is you can protect yourself and your land from the damaging pollution before it even happens, virtually eliminating the risks associated with spills.

We believe that nature has already solved some of our most complex problems. Drawing inspiration from nature, MycoRemedy provides the most cost-effective, rapid and natural remediation technology available without sacrificing other high-quality solutions.

MycoRemedy utilizes mycelium—the living body of mushrooms—to digest contaminants nature's way, without the need for any intensive energy or chemical inputs. Apart from protecting and restoring land to its pristine state, mycelium has also been shown to improve soil quality and rebuild healthy soil.

Our MycoMats are designed with simplicity in mind. The MycoMats contain mycelium grown on a straw substrate contained in easy-to-install packaging. The MycoMats are simply rolled out for easy installation or inserted vertically into the soil, and because they are completely natural and made from bio-compostable and biodegradable materials, they never need to be removed and can remain in the soil indefinitely. The mycelium—which grows underground—will grow out of the MycoMats and into the soil, remediating as it goes.

Although the mycelium starts within the mat, it is easily able to branch out through the soil, forming a network that can cover a large area. In nature, mycelium is able to act as a decomposer by releasing enzymes to break down decaying matter in the ecosystem.

MycoMats work the same way: the mycelium releases natural enzymes that are able to break down hydrocarbons and other contaminants in the soil, restoring it to its natural state.

Apart from just tackling contamination problems, mycelium is an essential part of any healthy soil system. Mycelium not only digests contaminants but, just as it does in a natural ecosystem, it will digest dead and decaying plant matter aiding in the nutrient cycling in the soil. Introducing mycelium to the soil it not only breaks down contaminants but has also been shown to help re-establish healthy bacterial communities, increasing overall soil health and productivity.

By having MycoMats ready in your soil, if a spill were to occur the mycelium within the mats would be able to start the remediation process immediately, potentially reducing the long-term impact on the soil. Although installing the mats ahead of time can help assure you peace of mind and minimize some of the risks associated with leaks and spills, the technology can also be used after the fact to offer rapid and natural remediation.

Traditional methods tend to be very expensive, slow and often rely on energy-intensive inputs. MycoRemedy strives to ensure that cost is not a barrier to effective, rapid, and environmentally conscious remediation. We want to make sure that everyone is able to remediate the natural way.

At the age of 15, KELCIE MILLER-ANDERSON began research to address one of the oil sands’ most prevalent environmental concerns, the tailing ponds. Since then she has created two novel methods of fungi-based remediation that are able to treat a variety of constituents of concern, and started her first company based on her research. Her work on Mycoremediation has earned her numerous awards including an AsTech award for top science project in Alberta and an Emerald Award for environmental achievement. Kelcie’s work has been featured in Maclean’s, she was named a “great Canadian game changer” by A\J Alternatives Journal: Canada’s Environmental Voice, and Alberta Oil magazine named her one of Canada’s top energy innovators. She was recognized as one of the Youth in Motion Top 20 Under 20 in 2013, and as one of The Next 36. 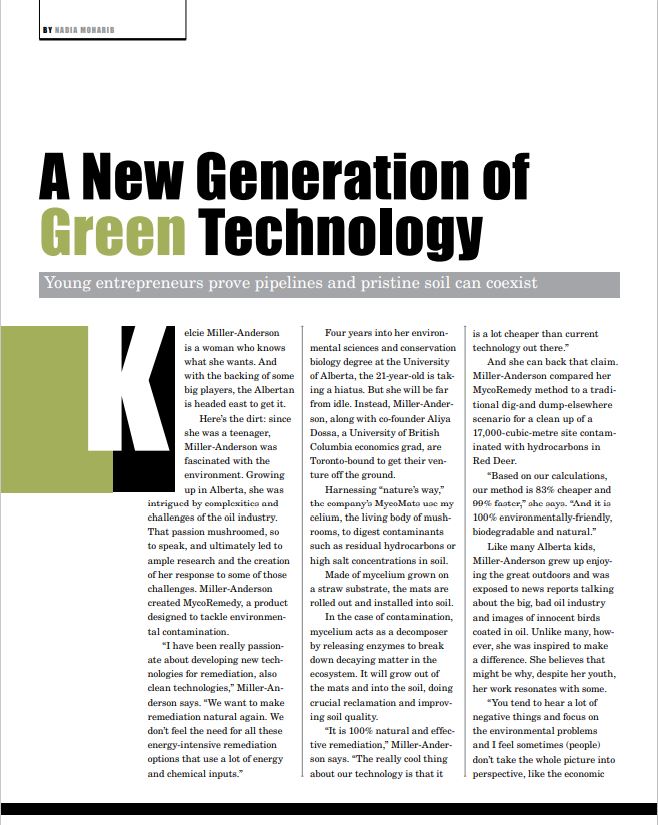 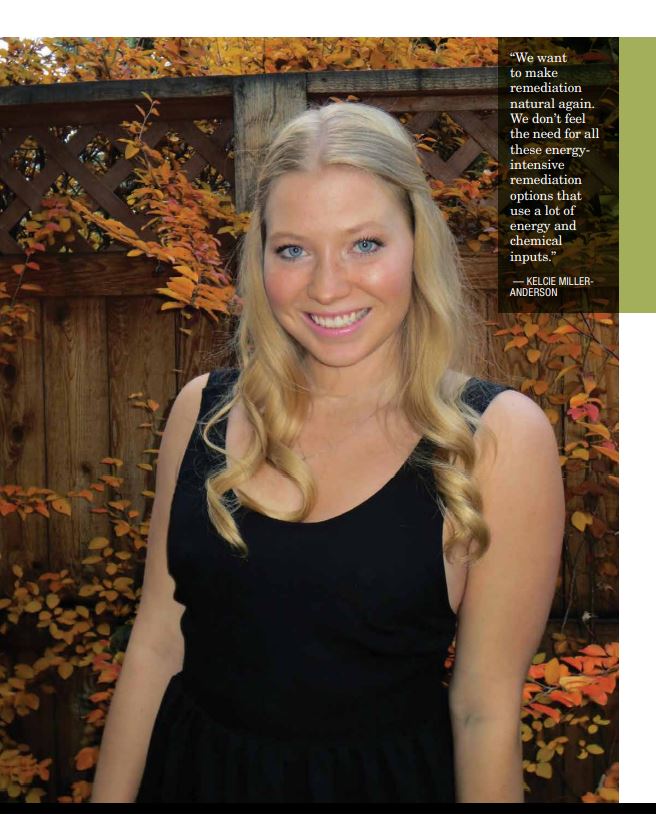 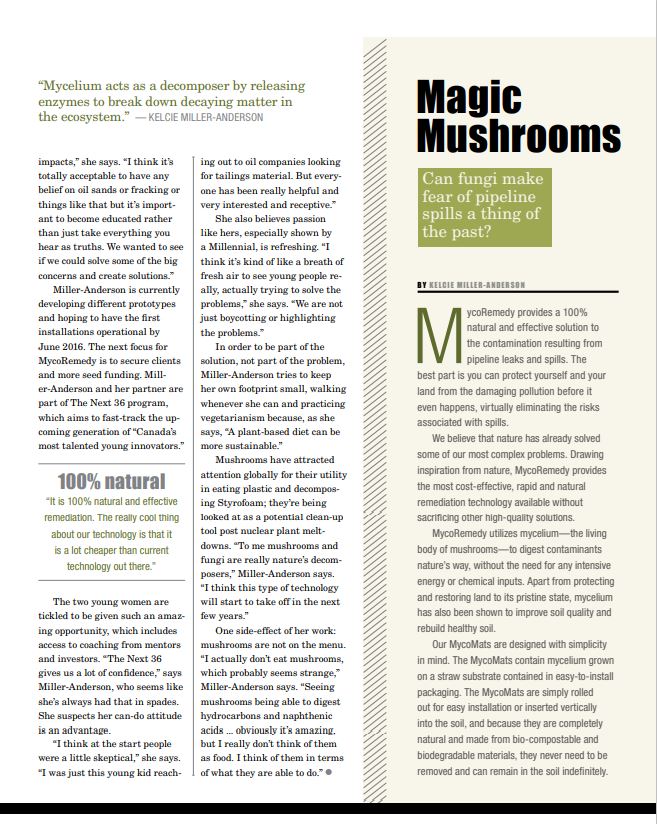 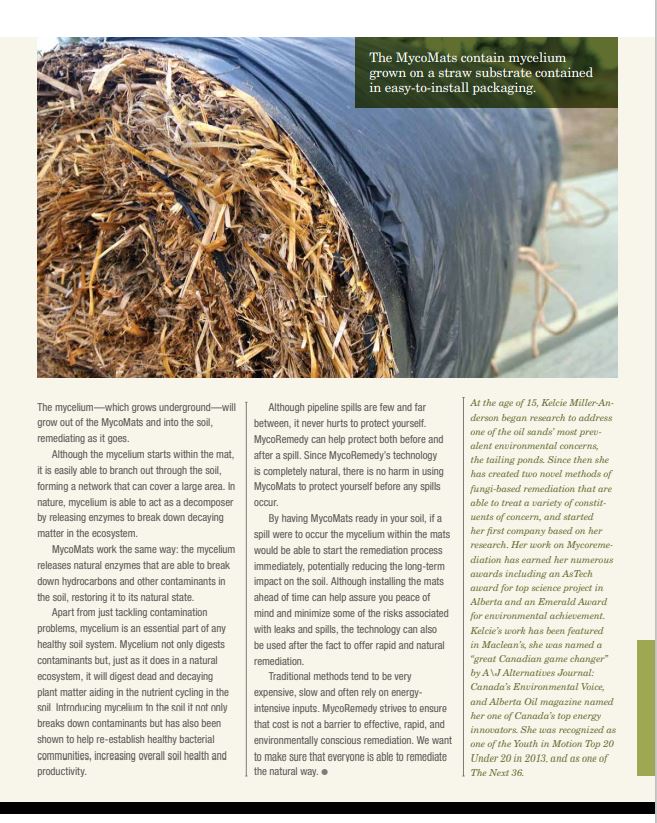