Despite doom and gloom around energy transport in Canada, there is good news on the horizon for pipeline landowners.

What does a landowner property rights organization have in common with a coalition of Indigenous chiefs?

Being pro development, pro prosperity and committed to getting pipelines built safely and sustainably, for starters.

This past November, I attended the National Coalition of Chiefs (NCC) conference in Calgary. A pro energy Indigenous group, NCC is committed to getting pipelines built. While safety and environment are priorities, ending on-reserve poverty is its primary goal.

Respecting landowners, both Indigenous and non-Indigenous

An alliance between the NCC and CAEPLA (Canadian Association of Energy and Pipeline Landowner Associations) was first revealed in the Summer 2019 issue of the Pipeline Observer. This alliance was publicly announced by Dale Swampy, CEO of the NCC, and myself at that successful Calgary conference.

CAEPLA believes protection of property rights can not only get pipelines built, but also promote prosperity of all Canadians while building right, building safely and building in an environmentally friendly way that respects landowners, both Indigenous and non-Indigenous. Which is why we reached out to Dale Swampy when we first heard of the work he is doing with the NCC.

The NCC is a breath of fresh air. Too often, the only story we hear about Indigenous Canadians and pipelines centers on First Nations activists opposed to energy and energy transport. But the NCC wants everyone to know another First Nations story — a story of hope and prosperity that will help their people escape poverty.

CAEPLA is committed to working with the NCC to build bridges between all landowners, rural and Indigenous, and protect their property rights.

One major pipeline that got built this past year in Canada is Enbridge’s Line 3 Replacement (L3RP). On December 1, oil flowed in the new replacement pipe from Hardisty, Alberta, to Gretna, Manitoba.

It’s the only major pipeline project built in Canada in the past 10 years and CAEPLA played a big role in getting it done — and done right.

CAEPLA negotiated for standards that raised the bar on safety and environment that exceeded those of the regulator, while also featuring a precedent-setting biosecurity protocol and CAEPLA-approved independent construction monitors, beneficial to both landowners and Enbridge.

It was a win for everyone. Not only for landowners and Enbridge, but also for Energy Corridor Canadians and the economy.

This is a big deal in an era when energy transport has been paralyzed by anti-pipeline activists, and when a regulatory framework under the new Impact Assessment Act (IAA) and Canadian Energy Regulator Act (CER) threatens property rights like never before.

In with the new, out with the old

The new Line 3 is now in service in Canada, but there is still work to be completed on the Right of Way. As farmers and ranchers know too well, the weather last fall wasn’t your friend. Which is why, for Enbridge, some remediation work on the final spreads of the Line 3 Replacement got delayed, but will resume this spring.

The next phase of this project is the decommissioning of the old Line 3. As directly affected landowners live and work with this pipe in their backyards 24/7/365, they have serious skin in the game. Nobody has a greater interest in seeing the old pipe dealt with right.

CAEPLA-approved, independent construction monitors will again be on site. Just as they did during construction of L3RP, these monitors will help the company pre-empt problems and provide pipeline landowners and the public reliable peace of mind.

Even though it is the responsibility of each landowner to know what is happening on their property, the CAEPLA construction monitors, provided by the skilled team of Infocus Management Consulting, are the boots on the ground helping ensure work is carried out as promised in the Easement Agreement.

For several years now, CAEPLA has been engaged with Enbridge overseeing University of Calgary research on corrosion and the structural integrity of decommissioned pipe. The U of C was awarded an additional Natural Sciences and Engineering Research Council of Canada (NSERC) grant to continue with its research for a couple more years.

Much has been learned by both CAEPLA and the landowner committee, as well as by Enbridge, on what might happen to pipe that is decommissioned and left in the ground.

As we’ve participated in meetings and consulted experts, what we have learned is “we don’t know what we don’t know.”

I know that sounds weird. But it is an important thing to acknowledge.

The experts assure us we are asking the right questions and are on the right track. But this is an issue of enormous importance to landowners, and knowledge is power. So we need to be patient and learn everything we possibly can to ensure decommissioning is done right. These things take time, so stay tuned.

When it comes to figuring out what actually happens to decommissioned pipe, CAEPLA is at the cutting edge. We recruit independent experts, because we are seeking to understand what the risks really are to land-owners living and farming over these pipes. And as it turns out, we've been told that no research has been done on abandoned-in-place pipelines anywhere in North America, ever.

Want to be an expert on decommissioning?

As technology continues to advance, we are optimistic that cost-efficient and environmentally friendly possibilities will emerge, and we will pursue them for you. Because CAEPLA is all about solutions, and this is a great opportunity to cooperate with industry to find some for pipeline landowners.

Another area where CAEPLA will continue with its pro-active approach is with our Workshop Series. Available to landowners, this series is an opportunity like no other. In a laid-back atmosphere, landowners learn about the energy industry, how pipeline systems work, the types of product that flows through the pipes, biosecurity protocols and so much more.

I will venture to say landowners who have attended these events now have a greater understanding of the pipeline industry than 95 per cent of the public does.

So if old pipe and what happens to it is top-of-mind for you as a pipeline landowner — and it should be — then you will be as excited as I am to see the subject showcased in the Workshop Series very soon.

Because decommissioning will be the most important issue for pipeline landowners in every corridor, from Trans Mountain to the southern Ontario heartland.

Given the precedent CAEPLA helped set for L3RP when it comes to respect for landowners and their property, for safety, environmental stewardship and professionalism, we are confident the decommissioning discussion will go the same way.

Do you have a question or a situation happening on your property? Are you a TMX landowner and have concerns about how you are being affected? Give CAEPLA a call at 306.522.5000 or email us at [email protected] or through our website caepla.org. 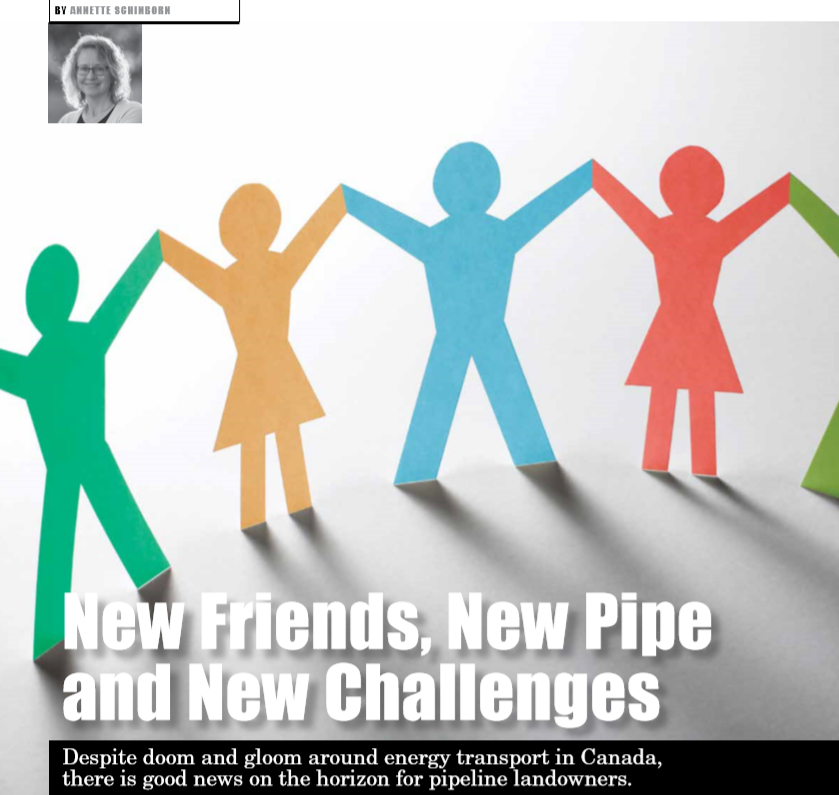