Scandals are inevitable in regulatory regimes that are economically corrupt by their very nature.

Rather than facilitate a revolving door for ethically challenged government bureaucrats, provinces need to shut down these archaic agencies.

The newly-appointed chief executive officer of the Alberta Energy Regulator was a central figure in a Saskatchewan government land-deal scandal that cost taxpayers millions of dollars, was the subject of a scathing audit, and prompted an RCMP investigation.

The cloud of doubt that still hangs over Laurie Pushor's involvement in the Saskatchewan scandal should have disqualified him from the position, opposition critics in both provinces say.

And they say Pushor's past will make it difficult for the AER to restore its own reputation, which was seriously undermined in a much-publicized scandal involving self-dealing and lavish expenses by some of its now-former senior managers.

"I was quite surprised to see that announcement the other day because I think Laurie Pushor's history here in Saskatchewan still has a lot of clouds of uncertainty and doubt hanging over it," Saskatchewan Opposition NDP MLA Cathy Sproule said.

"If you want to restore the transparency and the reputation of a regulator like the AER, I would think there are several other people in this country who would be much more qualified, with much more experience, that would be able to do the job very well," said Sproule, who is her party's house leader and critic for the land-deal scandal.

Alberta NDP energy critic Irfan Sabir said Pushor is clearly not the right person to lead the AER, especially as the organization tries to reform its governance and rehabilitate its image, while the industry is in crisis due to free-falling oil prices.

"This person brings baggage of his own, and the AER will have to spend time defending this person, defending their choice," which he said will detract from the vital work that needs to be done now.

Last week, the regulator announced that after a "thorough and exhaustive competition," it had appointed Pushor.

CBC News revealed that in 2014, the GTH bought 204 acres of land from a Regina developer for far more than its appraised value. That resulted in a $5-million profit for the developer's company. A few days later, the GTH sold some of that land to the Saskatchewan Ministry of Highways for less than half the price it had paid.

As senior adviser to then-GTH minister Bill Boyd, Pushor negotiated the initial land deal with the Regina developer, who was a supporter of the ruling Saskatchewan Party.

No charges after police investigation

As CBC News in Saskatchewan produced revelation after revelation, the GTH scandal roiled the legislature and the province for months.

Boyd defended the deal by saying land prices in the area were increasing at the time and acquiring the land was critical for a planned highway bypass.

But a 2016 report by Saskatchewan's provincial auditor confirmed the GTH had paid too much for the land and failed to have appropriate policies in place.

The auditor found no evidence of fraud, wrongdoing, or conflict of interest within the organization, although the scope of the audit did not allow her to interview the developer or any other third parties, Sproule said.

The RCMP began a criminal investigation of the land deals in February 2016, the same month CBC News published its initial report. Two years later, the RCMP announced that it and the Manitoba prosecutors reviewing the file had determined no criminal charges should be laid.

The ruling Saskatchewan Party repeatedly blocked opposition attempts to call Pushor and others to testify before the province's public accounts committee about their roles in the scandal.

Sproule, a former federal government lawyer, said the only way the full truth will be known is if the Saskatchewan NDP regain power because they would immediately hold a judicial inquiry.

The AER declined both an interview request to its board chair and to Pushor.

"With regard to the GTH land deal, Mr. Pushor made the AER aware of the matter, and we are satisfied that a thorough investigation exonerated Mr. Pushor from any wrongdoing. We consider the matter closed," an AER spokesperson said in an emailed statement.

"The recruiting process for Mr. Pushor's position was led by interim Chair Bev Yee, during the interim board's tenure. The AER Board is responsible for hiring the AER's CEO subject to the approval of the Minister of Energy and Minister of Environment and Parks."

Pushor starts as CEO on April 15.

The AER faced its own troubling scandal last year, well documented by reports issued in October 2019 by three provincial watchdogs: the auditor general, the public interest commissioner and the ethics commissioner.

The reports concluded the AER wrongfully used its resources to establish another company outside its mandate, while former CEO Jim Ellis displayed "reckless and wilful disregard" for the proper management of public funds.

The independent commissioners determined the AER's board oversaw a regulator whose executives flew first class and stayed at $500-a-night hotels, plotted how to privatize the province's intellectual property, and spent millions of public dollars on a private venture in order to secure their future employment.

A separate review by Alberta's auditor general confirmed, as first reported by CBC News, that Ellis and another senior AER executive commuted from their homes in British Columbia under work arrangements that were not properly approved and cost tens of thousands of dollars.

In some instances, the AER board knew of the behaviour and allowed it to happen, while at other times it was completely unaware of activities. Board members not only failed to provide oversight, they often didn't even question senior leadership.

On Wednesday, less than a week after Pushor's appointment was announced, the UCP government said it had named seven new board members to "bring a steady hand to the AER during these unprecedented economic times."

Both Sproule and Sabir question whether Pushor has the experience to lead the AER, given his relatively brief stint as Saskatchewan's deputy minister of energy.

"I think any responsible board would have found someone with more qualifications and less scandal associated with his name," Sproule said.

"Quite frankly, it is disrespectful to Albertans that they wouldn't be able to find a person more qualified within Alberta to lead our energy sector [regulator.]" 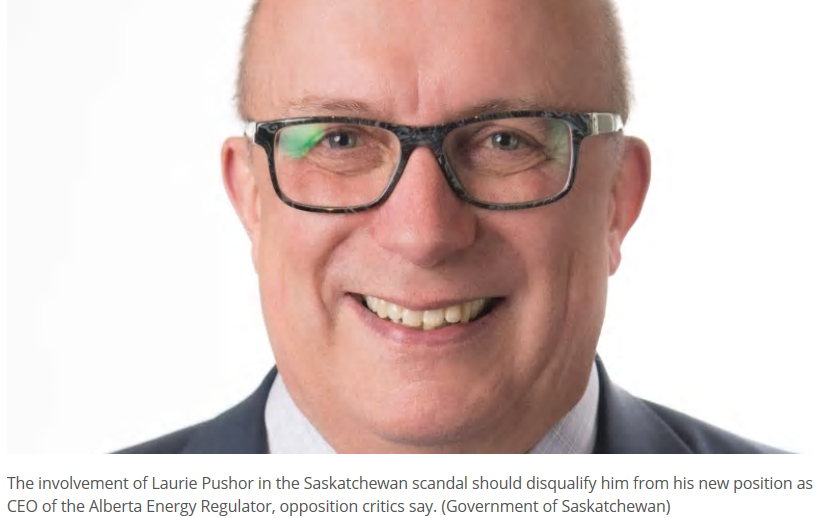