MACLEANS.ca - Opinion: Despite politicians musing about ‘de-risking’ Trans Mountain’s pipeline, there are a slew of reasons why government shouldn’t get involved 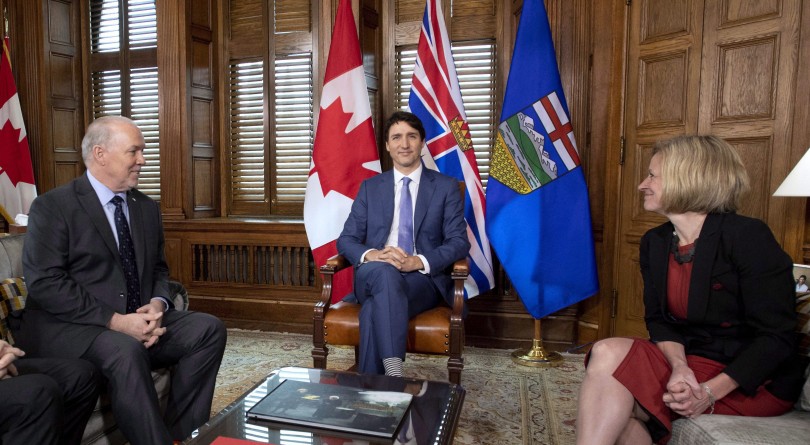 When Kinder Morgan announced on Apr. 8 that it was suspending all non-essential spending on the Trans Mountain pipeline expansion, Alberta Premier Rachel Notley immediately floated the idea of the Alberta government buying an equity stake in the pipeline. Even her political opponent, United Conservative Party leader Jason Kenney, agreed, arguing that a “market failure” justified the use of putting taxpayer money into the project.

Notley soon went further, suggesting that she was prepared to have the province buy the project outright, while the federal government also got into the act by emphasizing the need to “de-risk” Kinder Morgan investors.

By Sunday, following their meeting with B.C. Premier John Horgan—whose request of a court reference has held up the pipeline—both Notley and Prime Minister Justin Trudeau confirmed they were in discussions with Kinder Morgan to “eliminate financial risk” for the company.

There’s a strong business case for Trans Mountain to get built, and it would be an economic boon not just to Alberta but the country as a whole. But no matter how you cut it, it’s a terrible idea for the government to bail out—apologies, “invest in”—Trans Mountain for a whole host of reasons.

First, it wouldn’t be cheap. Kinder Morgan has already sunk $1.1 billion into the project, and the total cost is projected to run $7.4 billion. It’s hard to see how Alberta, already running large deficits and piling up debt, could afford such a purchase—one that wasn’t even being considered a week ago.

The Notley government is already on track to triple the province’s debt load in just one term in office. Meanwhile, the Trudeau government will add four times as much debt as it promised in the last election. Bottom line: there’s no spare cash lying around for such an expensive purchase.

Second, the odds of government(s) being able to finish the expansion on budget are, to be charitable, slight. Private companies have a built-in incentive to operate on time and on budget: if they don’t, they can go out of business. When they lose money, it is private investors who are on the hook. Contrast this with governments, which face no such pressure, and can simply pass on cost overruns to taxpayers. Bombardier, which operates more like an extension of government than a private business due to endless taxpayer subsidies, is a classic illustration of how inefficiency and incompetence can persist when a company is shielded from market forces.

Third, even if the Alberta and/or federal government could complete the pipeline extension efficiently, they would then have to make money operating it. Ask yourself: how many crown corporations do you know that turn big profits?

Most years, Canada Post loses money delivering letters even though they have a monopoly on it. Ditto VIA Rail operating trains. Cities across the country seldom break even running something as simple as a golf course. Why would anyone expect the government to suddenly be able to run something as complicated as a pipeline operation?

Fourth, the benefits to Canada’s economy of a government-owned pipeline will end up being far less than any current Kinder Morgan projections, for the simple reason that those projections do not account for the additional cost taxpayers would now incur to build it. Since nationalizing the project would cost at least $7.4 billion, that amount would have to first be subtracted from any future revenues in order to calculate the net economic benefit.

Fifth, it sets a terrible precedent for similar projects in the future. Foreign investors will know they can take Canadian governments to the cleaners’ by threatening to pull out of a project, and force Canadian taxpayers to bear the cost. Indeed, Kinder Morgan is likely already emboldened to ask for “de-risking” because of the long track record our politicians have of caving into demands for corporate welfare.

Finally, and perhaps most importantly, is that nationalization will do absolutely nothing to address the fundamental problems that have caused the current crisis: opposition from the British Columbia government and environmental activists. Alberta taking ownership of the pipeline will not change the B.C government’s political calculus, dampen the zeal of hardcore protestors, or deter First Nations groups determined to block it. If anything, it will add an additional layer of political interference, by substituting a political lens for a business one when it comes to building and operation.

Taxpayers should take note that similar arguments for government “investments” in a business were put forward back in 2009 when the federal and Ontario government opted to “invest” in General Motors and Chrysler. A 2015 CTF study found that the two governments lost a combined $3.7 billion through that transaction.

Make no mistake, the delays on the Trans Mountain pipeline are extremely disappointing and need to be addressed. The federal government needs to show leadership to ensure it gets built and there’s a strong case that it already has the tools it needs to do so, without putting a dime of taxpayers’ money on the table.

The Trans Mountain debacle is not a market failure. It is a political failure—and now our politicians are trying to buy their way out of the very mess they created in the first place.