The Enbridge Line 3 replacement is injecting some much-needed lifeblood into western Canada.

L3RP, the largest project in Enbridge history, began in summer 2017 in Hardisty, Alta. The Canadian phase of this $5.3-billion work continues through Saskatchewan and Manitoba in 2018. The target completion is for 2019 in Superior, Wis.

An estimated 24,000-plus full-time jobs will be created during the construction phase.

That’s welcome news to heavy equipment operators and other trades. In a time when work has been scarce, they’re looking forward to consistently being able to put food on the table.

An influx of workers from all around Canada is expected to flood to the replacement path.

Every town for hundreds of kilometres in each direction is expected to swell with pipeliners.

For local vendors, it will be a time to make hay selling food, lodging, fuel and more.

Enbridge itself is also throwing in for local upgrade projects.

Whether for sports arenas, community halls, or fairgrounds, several towns across the way have already received between $2K-$50K from the company for their various needs.

During this phase of the pipeline replacement, Enbridge has pledged to invest more than $3-million in community-based initiatives. 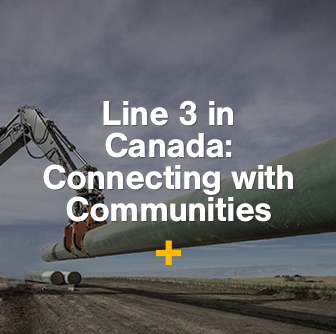 There is a Canadian "Deep State," and it is actively obstructing landowner efforts to support ethical and efficient energy independence in this country.