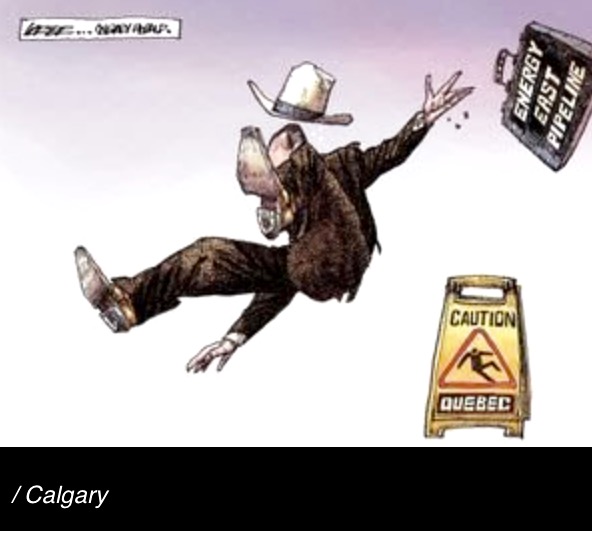 Alberta may have lost the policy battle over the Energy East pipeline, but there’s one more battle to fight: the huge jurisdictional overreach by the National Energy Board’s addition of upstream emissions to the review of TransCanada pipeline’s application.

Changing the rules in the middle of the game was the straw that broke the camel’s back for TransCanada. Publicly, Team Trudeau attributed the company’s decision to “market conditions,” and denied any responsibility. But secretly, they celebrated.

Energy East was unpopular in Quebec, and the Liberals did not want to have to defend it in the next federal election. Cancellation removes the pipeline issue, which all but guarantees the Liberals re-electing their Quebec MPs. With only 13 seats over the minimum required for a majority government, this is one of the Liberals’ highest priorities.

But the Liberals’ denials didn’t fool many people. During the 2015 federal election, Trudeau catered to the anti-pipeline vote by promising to add upstream and downstream emissions to the approval process.

This idea did not originate with the NEB. As Donald Savoie, former president of the Canadian Political Science Association and currently the Canada Research Chair at the University of Moncton, pointed out in the Globe and Mail:

“Politics, not market conditions, killed the Energy East pipeline. If government and regulatory agencies drag the puck long enough, and if they keep changing the rules of the game and adding new requirements along the way, market conditions will surely kick in.”

In battles like this, there is a short game and a long game. The short game is the immediate policy decision — in this case, the NEB’s decision on Energy East. Alberta has lost that one. But the long game issue is still on the table.

The NEB’s last-minute addition of upstream emissions — which are emissions created during production — to the Energy East review process was a serious and unacceptable intrusion into provincial jurisdiction.

According to Section 92(A) of the Constitution, upstream emissions are an area of exclusive provincial jurisdiction. At the end of the energy wars of the 1980s, Alberta Premier Peter Lougheed fought hard to add section 92(A) to the Constitution to protect and enhance Alberta’s (and every other province’s) control over the future development of our natural resources, such as oil, gas and coal.

Now is not the time to let Alberta’s ability to strike a “made in Alberta” balance between environment and energy slip back into the hands of unelected Ottawa bureaucrats. It happened in the 1980s with the National Energy Program, and Alberta cannot allow it to happen again.

If this issue involved resources in Quebec, we all know that there would be no expanding the scope of review to include upstream emissions.

The same logic applies to upstream emissions for oil and gas development in Alberta. Yes, the federal government — and by extension, the National Energy Board — have jurisdiction to make policy governing CO2 (and other) emissions resulting from the construction, operation and maintenance of interprovincial pipelines. Interprovincial pipelines have been an area of exclusive federal jurisdiction since 1949.

But emissions resulting from the “exploration … development, conservation and management of non-renewable natural resources” — the very words of the Constitution — are “exclusively” — again, the word used in Section 92(A) — under provincial jurisdiction.

For this very reason, previous attempts to expand the NEB’s scope of review for upstream emissions have been repeatedly rejected. When opponents of the now-cancelled Northern Gateway pipeline urged such expansion, the NEB gave a clear and concise answer:

“Discussion or consideration of alternatives to fossil fuels, or to the development of the oilsands, bear on broader policy questions that are beyond the jurisdiction of the board and separate from the proposed project.”

More recently, the C.D. Howe Institute reached the same conclusion and warned that adding upstream (and downstream) emissions “would hinder rather than help Canada to achieve promised emissions reductions at the lowest cost to the economy.”

If Maritime professors and Toronto think-tanks are willing to defend Alberta’s jurisdiction over the development of our natural resources, then certainly our own government should also.

Notley should demand that upstream (and downstream) emissions be removed from the NEB process. If Ottawa refuses, she has the option to use the constitutional reference power to challenge this federal intrusion in the courts.

She might even get the support of Quebec: not because they agree with Alberta’s policy objective, but because Quebec is always willing to defend provincial jurisdiction against federal overreach. With Quebec as an ally, Alberta’s chances of winning always increase exponentially.

Ted Morton is a senior fellow at the University of Calgary’s School of Public Policy and the Manning Centre.