Why have the Pallister PCs embraced the NDP’s transmission-line boondoggle?

“The Pallister government, having decided to continue the NDP-originated boondoggle, has yet to order an audit of Hydro’s northern actions.”

Manitoba Hydro spreads ratepayer money across the north, building unneeded dams and questionable transmission lines. The utility uses contractors, lawyers and consultants. While Manitoba’s auditor general found much wrong with the former NDP government’s east-side road efforts, he has yet to plumb the depths of Hydro’s actions.

Why audit the east-side effort but not Hydro? While the east-side authority spent hundreds of millions of our money, Hydro spends billions.

The east-side authority has been wound up, the manager dismissed and operations rolled into the government’s infrastructure department. Disclosing misjudgments of the NDP’s east-side organization makes good public and political sense. As for Hydro, the Pallister government, having decided to continue the NDP-originated boondoggle, has yet to order an audit of Hydro’s northern actions. Not hard to figure out why: while making Hydro theirs, best not to risk finding out and publicizing their utility’s misdeeds.

If misdeeds were found and publicized, one can only speculate as to whether or not it would affect funds to flow from the continuing boondoggle to the new government’s coffers, or hurt an upcoming carbon tax gambit being planned by the PCs involving Hydro.

Rumours abound about questionable actions of Hydro, its contractors and agents. Closing in on a billion on “negotiations” with First Nations and another $7 billion already gone on building Wuskwatim (finished), Bipole III and Keeyask (well underway, with another $8 billion yet to flush), billions pour through the hands of Hydro’s contractors, lawyers and consultants. Never before in Manitoba’s history has so much been spent by a government agency. Yet no audit, no inquiry, no review.

Avoiding independent scrutiny, Hydro lives a charmed life. The utility’s former risk manager—named the New York whistleblower—raised alarms 10 years ago, well before the bulk of the boondoggle expenditures were spent or committed. She warned of the risk of betting billions on long-term export contracts with American utilities to cover off rising expansion costs. She reported her concerns: first to Hydro management, then to its board, then to the then-auditor general (who, having been a Hydro director and audit committee chief before being named to the position, declared a conflict of interest), then to the then-ombudsman, police, Manitoba Public Utilities Board and, finally, a New York court. All to no avail.

The whistleblower was fired, no independent review conducted. Hydro spent over $4 million defending against her claims. Why? To avoid scrutiny? Trouble is, if she had been taken seriously, ratepayers wouldn’t be in the disaster we now have.

BBE Constructors, a joint venture led by American giant Bechtel managing Hydro’s $7 billion-plus Keeyask project, is currently defending claims of unsafe working conditions and unfair labour practices, claims sustained by quickly terminated Keeyask workers. BBE’s defence has been assisted by Hydro; the Province’s workplace health and safety and labour agencies; even the Workers Compensation Board of Manitoba. Whistleblowing is not healthy for complainants. The disaffected, terminated workers have been blocked at every turn, their complaints rejected and ignored. Rumours abound of questionable actions by Hydro’s agents, some working to keep First Nations’ happy with the utility. There’s lots more about untendered bush clearing and other gilded, gifted contracts. Where is the auditor? Value for money?

More puzzling, why do the Tories want to wear this NDP mess? 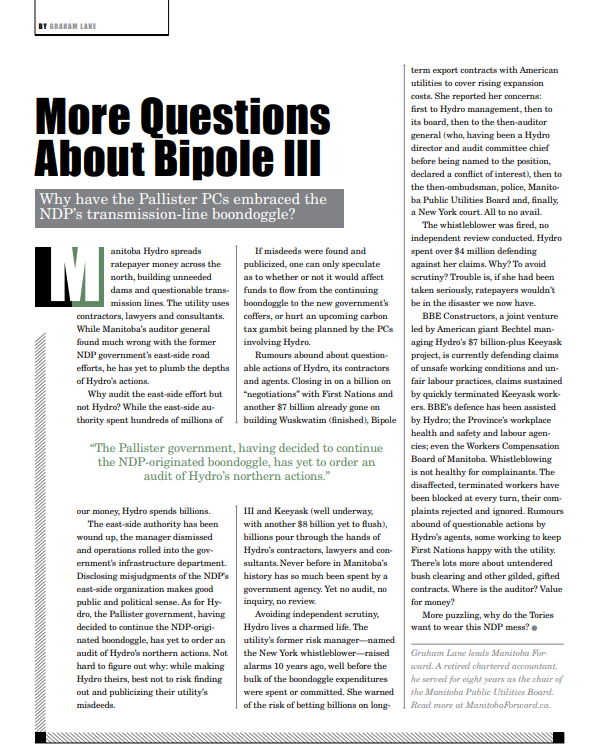 Graham Lane leads Manitoba Forward. A retired chartered accountant, he served for eight years as the chair of the Manitoba Public Utilities Board. Read more at ManitobaForward.ca.