Vickie Phillips received an unpleasant surprise when she stopped in for a fill-up at the Pop Shoppe in Greensboro, N.C., one Monday in May.

There was no fuel.

“I can’t believe that we’re here and can’t even get gas,” Phillips told a local TV station. “People are tired of sitting in the house and they just want to get out and try to resume something of normality with their life and they’re definitely going to need fuel and gas to do that.”

Phillips was just one of thousands of people who saw their travel plans disrupted in the wake of the May cyberattack targeting the Colonial Pipeline, a vital network of pipelines that run over 8,800 kilometres from the U.S. Gulf Coast to New York Harbor.

The New York Times reported that many stations in southeastern states immediately placed caps on the amount of fuel consumers could purchase, while many stations ran out of fuel altogether.

In the wake of the disruption, North Carolina Gov. Roy Cooper declared a state of emergency, while Georgia Gov. Brian Kemp suspended the state’s gas tax. The Biden administration, meanwhile, lifted environmental regulations on the sale of gasoline in several states and the nation’s capital.

Following the attack, fuel futures jumped to US$2.22, a three-year high.

Hackers: We didn’t mean to cause problems

There’s no question the Colonial Pipeline is a key piece of infrastructure.

Analysts have described the pipeline as one of the most vital energy arteries in the country, one capable of carrying up to three million barrels of fuel — gasoline, diesel and jet fuel — per day to the East Coast.

“This is as close as you can get to the jugular of infrastructure in the United States,” Amy Myers Jaffe, research professor of the Climate Policy Lab, told Reuters. “It’s not a major pipeline, it’s the pipeline.”

Still, the widespread disruption seemed to surprise even the hackers responsible for the cyberattack.

“Our goal is to make money and not creating [sic] problems for society,” DarkSide, the group the FBI confirmed is responsible for the attack, wrote on its website.

This invites an important question: how was a single cyberattack able to derail an entire region of the most prosperous country in the world, disrupting the lives of millions of Americans?

One answer is that we simply don’t have enough oil pipelines. The Colonial Pipeline provides nearly half — 45 per cent — of the fuel consumed on the East Coast. As other astute commentators have noted, “One pipeline network shouldn't be serving half of the East Coast's fuel needs.”

The reality is regulatory hurdles have made it all but impossible to build new pipelines, which has placed a great deal of pressure on existing energy infrastructure. And it’s getting worse. Indeed, politicians are now actively scrapping pipelines that are instrumental to meeting future energy needs.

“What we really need is not more, but less government oversight getting in the way of more pipelines.”

One of President Biden’s first initiatives was to scrap, by executive order, the Keystone Pipeline, a 4,324- km pipeline that could have carried roughly 800,000 barrels of oil each day from Alberta to the Gulf Coast. Instead, the bulk of that fuel will be transported by railways, which are less environmentally friendly and more dangerous.

Biden cancelling the Keystone Pipeline received a great deal of attention, but it’s worth noting the action was part of a trend that has been largely overlooked. Across Canada and the U.S., pipelines are being targeted by politicians, regulators and courts with great zeal.

A year ago, Michigan Gov. Gretchen Whitmer took legal action to force the shutdown of the Line 5 Pipeline, which links Lake Michigan and Lake Huron and carries about 500,000 barrels of crude each day.

“Here in Michigan, the Great Lakes define our borders, but they also define who we are as people,” said Whitmer, who gave Enbridge Energy a deadline of May 2021 to stop the oil.

The deadline came and went, but the oil was still flowing. And news reports say Enbridge and the Michigan governor are likely heading for a legal showdown.

Then there is the Atlantic Coast Pipeline. Last year, Duke Energy and Dominion Energy announced the cancellation of the near 1,000-km project — which would have piped gas from West Virginia to eastern North Carolina — because delays and regulatory uncertainty had threatened “the economic viability of the project.”

The 1,886-km Dakota Access Pipeline, which has been operational since 2017, currently carries hundreds of thousands of barrels of crude through the Dakotas to Iowa and Illinois. While the Biden administration has announced it will not shut down the pipeline, a U.S. district court judge did in July 2020. That ruling was overturned by a federal appellate court, but the pipeline’s fate hangs in the balance pending an environmental review.

For many, the lesson of the recent gas shortage is that we need more cybersecurity oversight.

“This pipeline shutdown sends the message that core elements of our national infrastructure continue to be vulnerable to cyberattack,” Mike Chapple, a professor in University of Notre Dame’s Mendoza College of Business, told Reuters. “Securing our energy infrastructure is a national security issue that involves several different federal agencies and requires centralized leadership.”

“Anyone who understands Hayek’s ‘knowledge problem’ will be skeptical of solutions based on centralized leadership.”

Anyone who understands Hayek’s “knowledge problem” will be rightly skeptical of solutions based on “centralized leadership,” especially when it comes to a “national security issue that involves several different agencies,” given the track records of the NSA, the TSA, the CDC, etc. What we really need is not more, but less government oversight getting in the way of more pipelines.

The current disruption should serve as a reminder that fossil fuels are an essential part of human prosperity.

No one has made this point better than Alex Epstein, the author of The Moral Case for Fossil Fuels, who noted that cheap, plentiful fossil fuels — when married with human ingenuity — allow humans to improve the world around them.

“Fossil fuel technology transforms nature to improve human life on an epic scale. It is the only energy technology that can currently meet the energy needs of all seven-plus billion people on this planet,” wrote Epstein. “Ultimately, the moral case for fossil fuels is not about fossil fuels; it’s the moral case for using cheap, plentiful, reliable energy to amplify our abilities to make the world a better place — a better place for human beings.”

The other side of that coin is that when energy is made needlessly expensive, scarce and unreliable — whether by cybercriminals or politicians — it makes the world a more frustrating and unhappy place for human beings, as Vickie Phillips and many other Americans discovered. 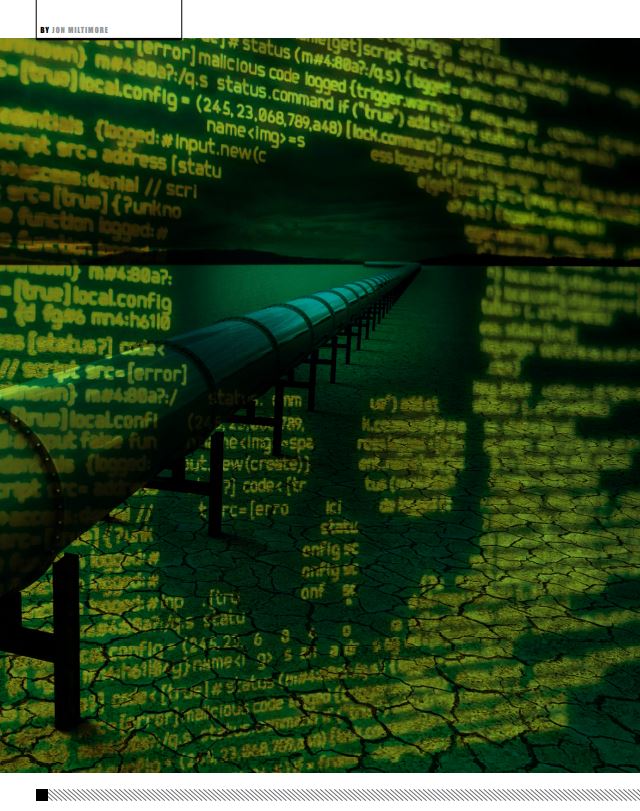 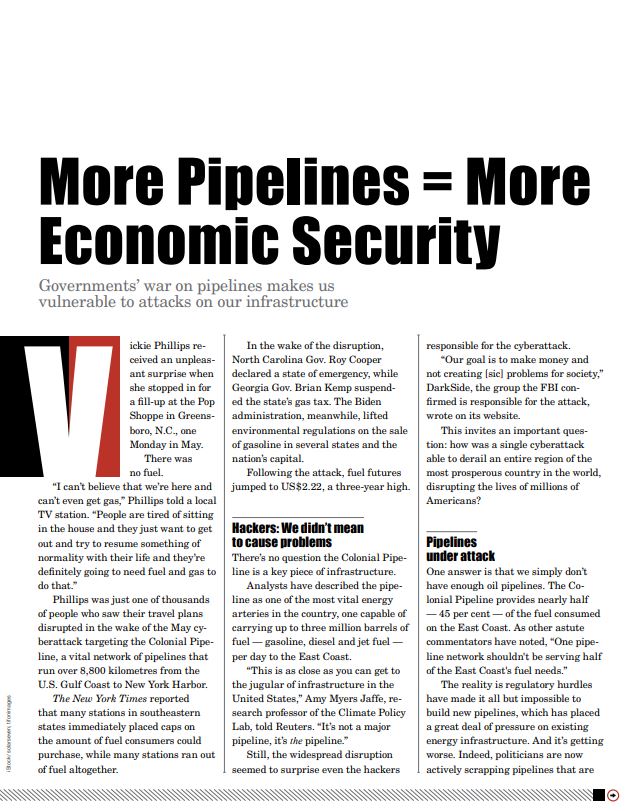 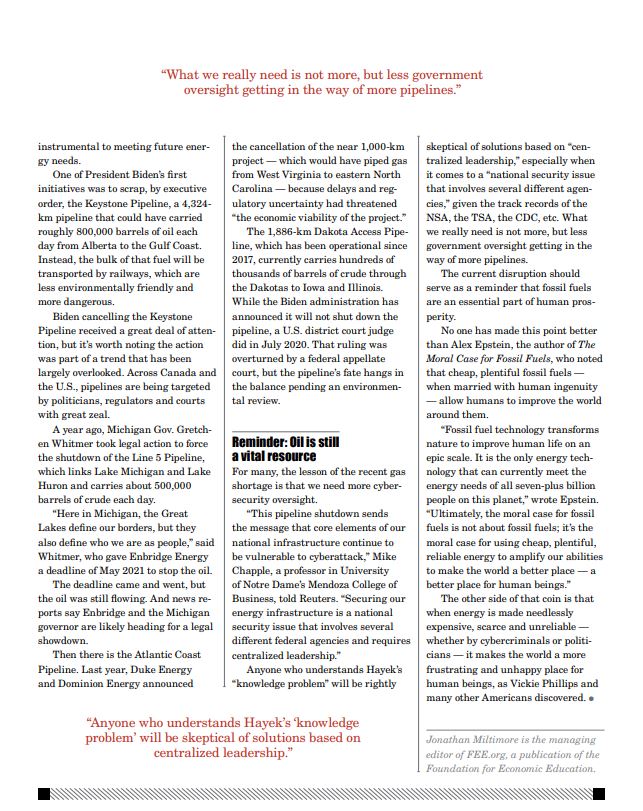 Jonathan Miltimore is the managing editor of FEE.org, a publication of the Foundation for Economic Education.