Suspension of property rights has paralyzed the pipeline industry, too

“The current paralysis in the pipeline industry is a consequence of a combination the absence of privately owned property and of restrictions on individuals regarding the use of things that belong to them: land, labour, equipment and their entrepreneurial acumen.”

“Interventionism is the problem, not the solution.”

The problem with the “dismal science” is well known to politicians and the special interests to whom they cater. Economics mercilessly exposes and dispels the myths conjured to justify central planning and government interventionism. It puts parameters on people’s romantic longings for coerced Utopias. And it is why many dreamy, peeved individuals disparage economists who understand the importance of private resource ownership and unimpeded market processes and why mainstream media outlets are so careful when it comes to which pundits they call on to discuss public policy.

Moving oil and gas through pipelines in Canada provides a contemporary example of what happens when authorities try to suspend market processes for political gain.

Transportation by pipeline, truck, rail or ship is aimed ultimately at satisfying the wants of final consumers for the innumerable goods made from oil and gas that make our everyday 21st century lives possible. This critical activity is in the crosshairs of politicians and bureaucrats eager to “do something.” The “something” in this instance includes, but is not limited to:  protecting competing firms in the oil and gas industry, protecting lakes, rivers, streams and underground aquifers, protecting land, preventing climate change, creating opportunities for indigenous peoples, choreographing the pattern, method and quantity of conventional heavy oil and oil sand bitumen extracted, refined and distributed, and generating a politically acceptable revenue stream for various levels of government.

The range and types of challenges being faced, for instance, by the TransCanada Energy East project and the Enbridge Northern Gateway project therefore extend far beyond the daunting physical and financial ones.

Entrepreneurs and owners of resources (land, labour and equipment) are all subject to expropriation by the various levels of government to the degree necessary to carry out one or more of the policy objectives above. Implementing them presumes that private property is subject to majority vote and that privately owned resources and the lives of individuals ought to be directed in particular ways against their wills. Not surprisingly, this leads to problems larger than those the original policy aimed to resolve.

Ludwig von Mises, better than any other economist of the 20th century, identified and delineated the consequences of assaults on the institution of private property and interfering in exchanges between consenting adults. Despite all attempts to invalidate it, Mises made clear this indisputable fact: in the unhampered market forces are at work which tend to put every privately owned means of production to the use in which it is most beneficial for the satisfaction of human wants . When an authority interferes with this process in order to bring about a different use of productive factors it can only impair supply, not improve it.

Individuals belonging to special interests that seek to use the coercive power of government to limit or ultimately shut down industry know this well. The current paralysis in the pipeline industry is a consequence of a combination the absence of privately owned property and of restrictions on individuals regarding the use of things that belong to them: land, labour, equipment and their entrepreneurial acumen. The reason why central planning inevitably fails is that no one knows better how to use their scarce resources than the owners of the scarce resources themselves.

Elected officials and bureaucrats have an important role to play, but not in the way they would have you believe. That role is not to approve of projects that are in some specious conceptualization of a “national interest.” It is not to define special terms and conditions from review panels. It is not to assume a “leadership role” if the legislated regulatory review process with regard to a particular project becomes bogged down. It does not require working with stakeholders to resolve impasses or introducing special legislation. Interventionism is the problem, not the solution.

Many Canadians, unaware of what they are truly asking for, pressure politicians to just “do something” to resolve perceived problems. They clamour for action, not realizing the best course of action for politicians is to do nothing other than to respect and refrain from interfering with the decisions of individuals over their persons and their property as they pursue their separate self-interests. 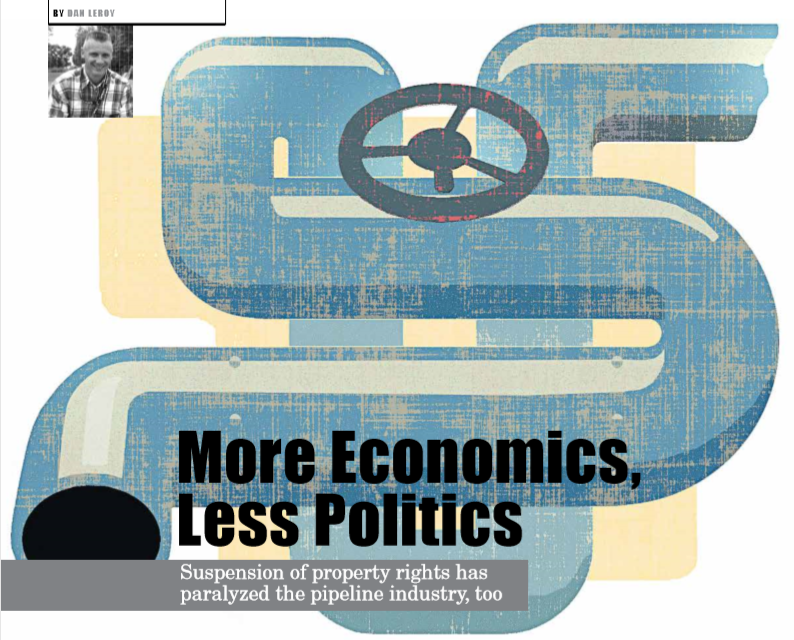 Danny LeRoy, PhD., is an economics professor at the University of Lethbridge where he is also coordinator of the Agricultural Studies program. Areas of research include commodity production, marketing and trade, government interventionism and Austrian Economics. He occasionally blogs at Mises.ca.