"This is the predictable reaction from a desperate NDP government who can only blame everyone else rather than take responsibility for its own actions."
— BLAINE PEDERSEN

Blaine Pedersen is the Progressive Conservative agriculture critic in the Manitoba Legislature. Because the brunt of the governing NDP’s controversial BiPole III power line project has so far been borne by rural farmers, Pedersen has also become the Official Opposition’s point man on that controversial file.

Speaking to CAEPLA, Pedersen launched a blistering attack on the ethics behind the treatment of farm families in the path of BiPole III, saying “the impact on the mental and physical health of victims has been enormous.”

Pedersen, MLA for Midland, said direct pressure from the NDP government of Premier Greg Selinger has emboldened the Crown monopoly to toss aside all considerations that would impede the project, respect for property rights being chief among them.

CAEPLA: Manitoba Hydro's dealing with landowners along the BiPole III route has flown largely under the radar. Why do you think Hydro turned a deaf ear to the requests of farmers to have property rights negotiated on their behalf by CAEPLA and MBLC? Is it because of political interference?

Blaine Pedersen: Manitobans are paying more and getting less as Manitoba Hydro is under the direct orders of the NDP government to build the west-side waste line no matter what. The NDP is building BiPole III and Keeyask generating station as part of their plan to Americanize Manitoba Hydro in a failed effort to create government revenues.

CAEPLA: It seems this issue has been unreported on Winnipeg TV and radio. Do you think residents of Winnipeg, where BiPole will finally land, would speak out on behalf of affected landowners if they knew this type of bullying was the tactic behind their electricity being delivered?

BP: The NDP are well aware of the relatively small number of affected landowners and the fact it doesn’t hurt their traditional voters.  They are also counting on apathy of Manitobans. All these factors were calculated in their decision to proceed with the west-side waste line.

CAEPLA: Productive farmland was taken by Hydro’s actions and now weeds grow instead of food, and there are reports Hydro is not observing prevention and is spreading diseases like clubroot. How did Hydro respond to the biosecurity protocol presented by CAEPLA and farmers?

BP: Manitoba Hydro’s dismissive attitude was predictable. Monopolies operate differently from private-sector companies. With the incredible pressure to build from their NDP political masters, Hydro’s response was to produce a biosecurity document, wave it about like they meant business, then ignore it and move on. Their biosecurity protocol is a talking point, not an action plan.

CAEPLA: What does this say to Manitobans about the NDP’s environmental protection policies?

BP: NDP environmental policy is to steal private property away from farm families and let the weeds and diseases grow, instead of working with farm families who continue to produce food for a hungry world. If the NDP truly cared about the environment, why would they build a transmission line an extra 500 kilometres longer, running through some of the most productive farmland in the world, only to sell power at a loss into the U.S.?

CAEPLA: The Selinger cabinet expropriated 120 farmers. Can you describe some of the hardships this has caused farm families? In some cases this land has been worked for generations.

BP: I know first-hand the stress this NDP bullying has put on farm families. I will not share names to protect their privacy, but I can tell you the impact on the mental and physical health has been enormous. Part of my job as MLA has been to give positive reinforcement to the many landowners who have taken the brunt of shady Manitoba Hydro land agents and NDP bullying.

CAEPLA: The principle of notice before expropriation was usurped by a cabinet order, but Hydro got away without being held accountable. The minister, Eric Robinson, seemed to defend this in the legislature by referring to being an “expert” on “land being stolen” because of the province’s history with First Nations. Was he somehow blaming modern-day farm families for something they had no role in to justify secretly taking title to tracts of private farmland? Is this reverse racism?

BP: This is the predictable reaction from a desperate NDP government who can only blame everyone else rather than take responsibility for its own actions.

CAEPLA: BiPole III resulted in 120 expropriations by stealth of some of the most productive farmland in the country, and is spreading disease. This is the 800th anniversary of Magna Carta, yet here is the provincial NDP government taking land, and doing it in a way that is denying farmers and all Manitobans their property and human rights to freely associate and bargain collectively. How can Manitobans show support for fairness and demand MLAs from all parties do the same?

BP: How ironic, on the 800th anniversary of King John signing the Magna Carta pledging to guarantee private land ownership and to stop unfair taxation, we once again have a government breaking the very contents of the Magna Carta. Manitobans will have to do as the barons of King John’s time did and boot this tired, out-of-ideas, fiscally bankrupt NDP government out of office. All Manitobans deserve to be treated with respect and fairness. 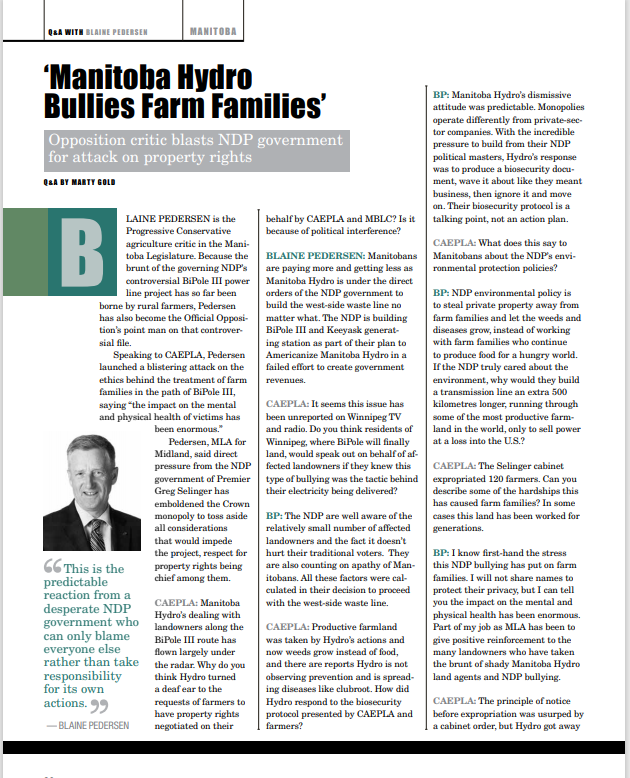 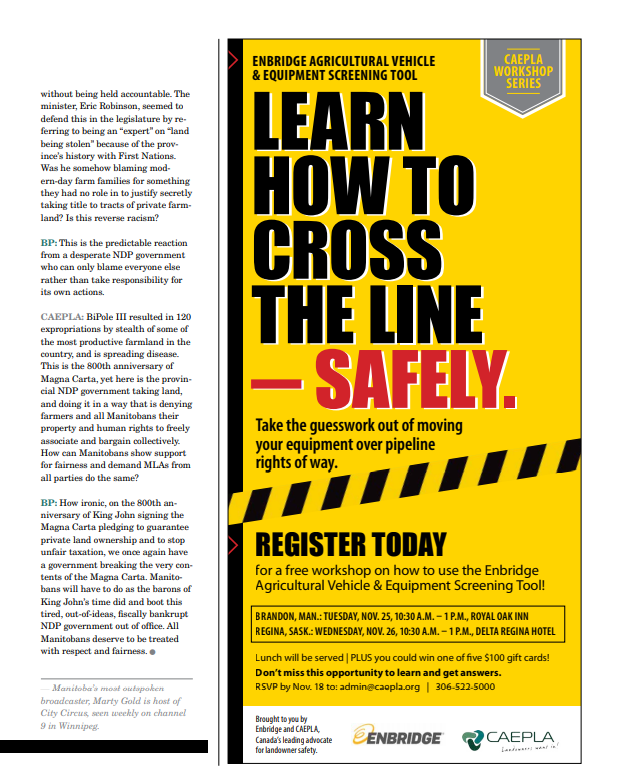