Michigan Gov. Gretchen Whitmer has launched the latest political hit job on a Canadian pipeline. Whitmer is targeting Enbridge’s Line 5, which runs from Alberta through the Great Lakes region to refineries and chemical plants in Sarnia, Ont.

The Sarnia terminus sells to companies that make products that fuel cars, trucks, vans, ships and airplanes throughout Ontario, Michigan, Ohio and Pennsylvania.

Whitmer either doesn’t know or doesn’t care that shutting Line 5 hurts her state almost as much as other states and provinces.

Whitmer claims the section of Line 5 running on the bottom of the Straits of Mackinac, between lakes Superior and Huron, is a potential hazard that could be punctured easily, causing a major disaster.

But the line has been in place since 1953 without any significant incident.

Enbridge wants to replace that theoretically vulnerable section with a buried line and has applied for a permit to do so. However, that’s not good enough for Whitmer.

There are also questions about whether her shutdown order is even legal. A 1977 treaty between Canada and the United States appears to make such unilateral action illegal and subject to arbitration.

This all brings to mind the way U.S. President Joe Biden cancelled the Keystone XL pipeline on the day he was inaugurated. Just as with Whitmer, this was an election promise made to anti-fossil-fuel climate crusaders. This too greatly damages Canadian export capacity for crude oil, bitumen or related products, and reduces American imports from a secure ally.

These exports will either be replaced by oil or other petroleum liquids shipped by rail or truck, which is much more risky than a pipeline, or by imports from countries with less savoury regimes and little adherence to the environmental or safety standards of U.S. or Canadian producers or shippers.

Domestic oil companies in the U.S. can no longer ramp up production, as the Biden administration has forbidden further drilling on federal lands, including bountiful shale formations in New Mexico, Colorado, Utah, Wyoming, Montana and other places. Hence the shift to imports, other than from Canada.

The environmental activists who fight any and all new – Northern Gateway and Energy East – or existing, or enhancements of existing pipelines – Trans Mountain – are using all legal, social, political, obstructive and media methods to stop fuel shipments.

Regulatory agencies in Canada and the U.S. were created to review and set environmental, safety and right-of-way issues and standards before construction, and to monitor their safety during operation.

If those standards – and the treaties between Canada and the U.S. that enable international construction, operation, repair and enhancement of pipelines – need serious revision, then do so in a transparent, expeditious, just and democratic process.

Those treaty updates should severely limit the ability of politicians or extremists to halt legitimate and economically crucial activity. Anarchic and arbitrary action will only increase the perceived risks of dealing with politicized sectors such as energy, harming consumers and businesses.

Ultimately, it will harm states, provinces and nations, putting them at the whim of base-placating demagogues and erratic, undependable or malign foreign despots with oil and gas resources.

Regulatory agencies, and the international bodies that have jurisdiction over international shipments, should be the ones to adjudicate over these issues.

If there are deficiencies in those agencies or their processes, then they should be discussed in open forums. That should include public and interest group petitioner and intervenor input when and where appropriate.

Keystone XL, Line 5, Trans Mountain, the ill-fated Energy East and other pipelines should no longer be held hostage nor threatened by North American virtue signallers. 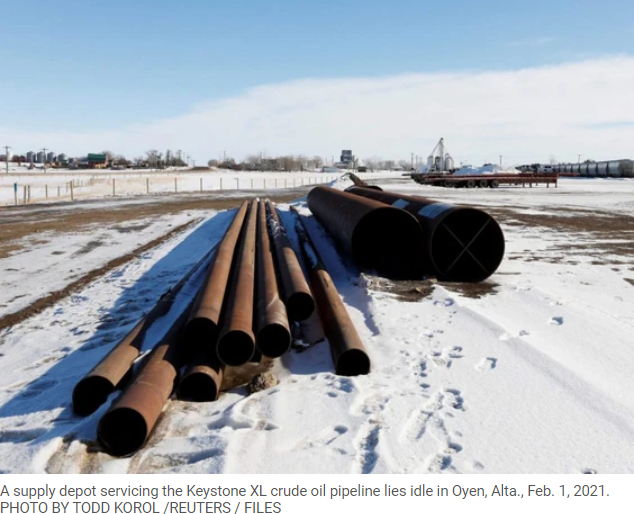