While BC’s Lower Mainland continues to see protests and blockades around the area, some of the protestors are starting to become familiar faces as they are involved in a number of events and TV interviews.

Many of the people at the protests and blockades do not want to identify as protestors and are instead referring to themselves as “land defenders. Many of the protests seem to be organized by a small group of people.

Natalie Knight is one of the main faces behind many blockades and other events around Vancouver.

Knight has been in the spotlight a number of times and participated in many interviews with CBC and Global News. She was even arrested in 2016 for occupying a building that was to be demolished in BC.

She attended Simon Fraser University (SFU) in Burnaby BC where she received a PhD. Knight also credits paying off her $50,000 student debt in America from Canadian taxpayer funds she received for her studies at SFU, in an academic paper entitled, “Dispossessed Indigeneity:Literary Excavations of Internalized Colonialism”.

In an interview with Global News, Knight said, “We are Indigenous people who have lived on this land for a very long time with uninvited settlers on our land.”

“It’s an economic disruption,” she said when referring to the port blockade.

“We recognize that the government tends to only understand the language of money, so disrupting capital and the flow of goods is a language that they will understand.”

Knight calls herself an organizer of solidarity actions for the Vancouver Wet’suwet’en, even though she is not from Canada.

She says she is of Yurok and Navajo ancestry and has roots in New Mexico and California. She came to Canada for school eight years ago and was not willing to talk about her immigration status.

“I don’t think I need to share my status with you,” said Knight. 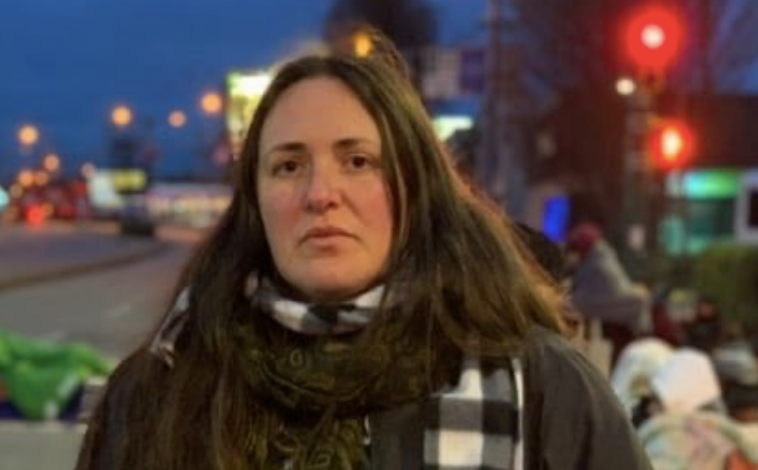