WATCH: A large group of people gathered in Drayton Valley on Tuesday calling for more support for the oil and gas industry and for pipelines. Albert Delitala reports. 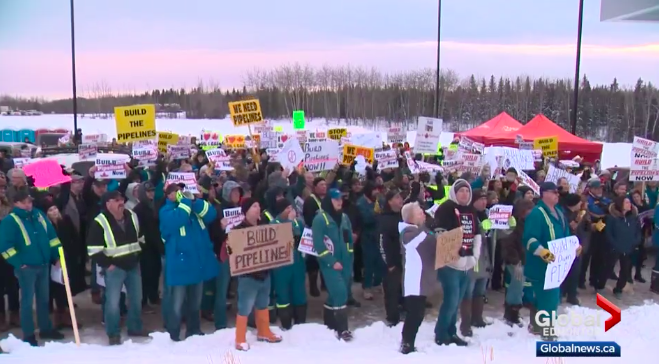 A rally calling for the immediate construction of new pipelines was held Tuesday in a central Alberta town that’s been particularly hard-hit by the oil price differential that’s been inflicting economic pain across much of the province.

Hundreds of people turned up at the demonstration outside the Clean Energy Technology Centre in Drayton Valley, Alta., at around 4 p.m. Protesters held signs with slogans like “build the pipelines now.” Organizers also asked them to come with letters to send to lawmakers in the Alberta legislature.

Tuesday’s rally was organized by Rally Canada. One of the organizers told Global News the group formed two weeks ago to make the community’s voice heard as the oil sector continues to struggle.

Tim Cameron helped organize the protest and said the group’s “message is for all Canadians.”

The rally comes exactly one week after dozens of business owners in the area signed a letter inviting Prime Minister Justin Trudeau to visit the town and have an “open, non-partisan discussion” about the growing desperation some sectors of Alberta’s economy is facing because of the low price the province fetches for its oil on the market compared to other oil-producing regions.

The people who signed the letter told Global News they are thankful to Trudeau for visiting Alberta and for speaking with energy CEOs but that they believe he needs to do more to speak directly with energy-sector workers in small-town Alberta “whose livelihoods depend upon” the energy sector.

At Tuesday’s rally, several demonstrators told Global News their work has dried up and their shifts have been cut back while others said businesses they run are losing customers as a result.

Garry Nelson owns a trucking company connected to the oil industry. He said his company has had to lay people off and cut hours to those who remain on the job.

“It’s pathetic, totally pathetic,” Nelson told Global News. “It’s something that should not happen. There’s no reason for it to happen.

Premier Rachel Notley has indicated the oil price differential is in large part due to a lack of pipelines able to carry significant volumes of Alberta bitumen to Canada’s coasts and then on to markets other than the U.S. Over the weekend, Notley announced her government is temporarily imposing an 8.7 per cent cut to oil production in the province in order to address the growing backlog of oil that she says isn’t being moved because of insufficient pipeline capacity.

Last month, the premier also announced her government plans to buy rail cars to move more oil that way until the long-term solution she is seeking — increased pipeline capacity — comes to fruition.

“This is not partisan,” Cameron said. “We need solutions. We need to put people to work.”

Concerns about the lack of pipeline capacity, as expressed by Alberta politicians as well as those working in the energy sector, has intensified every since the summer when the Federal Court of Appeal struck down the National Energy Board’s approval of the Trans Mountain pipeline expansion project. The project was meant to nearly triple the pipeline’s capacity, sending significantly more oil from Alberta to the West Coast.

A new round of NEB consultations for the proposed project got underway last month. The new talks are aimed at addressing shortcomings a judge pointed out in the NEB’s original process for approving the project.

Tuesday’s demonstration took place outside the venue hosting a talk by Vivian Krause, a researcher who suggests anti-pipeline activists are funded by foreign interests. The researcher was invited to speak in the town by Brazeau County.

Last month, Karuse told Global News her studies have led her to believe the push against Alberta’s oilsands is funded by American philanthropists in an effort to keep Alberta oil from reaching overseas markets, where it would attain a higher price per barrel.

“If Vivian wants to talk about foreign influence she should look into the massive amount of foreign dollars and foreign ownership of the oilsands that are poured into and influence our government at both the provincial and federal level all the time, but she never asks those questions,” Hudema said.

Hudema said Greenpeace is almost entirely funded by individuals who donate between $10-$20 and is not directed by corporate interests.


–With files from Global News’ Albert Delitala, Emily Metz, Fletcher Kent and from The Canadian Press