Landowners Left in the Cold Again?

The tension between Virginia landowners and Dominion Resources

The Atlantic Coast Pipeline has been proposed by Virginia-based Dominion Resources. While protesters and pundits debate environmental impact, Virginians have more immediate concerns.

In a May 2016 article for CFACT (the Committee For A Constructive Tomorrow), Richard Averitt noted that “what deeply troubles many landowners in the pipeline’s path is Dominion’s threat to ram the project down their throats using the power of eminent domain.”

The pressing issue at this point is Dominion’s plan to go through federal rather than state law. Under Virginia law, landowners enjoy greater property protection.

“There is, in fact, a way to build the pipeline and protect the rights of landowners through a combination of collocation with existing easements and free-market negotiations with willing landowners. Dominion could route a majority of the pipeline through pre-existing rights-of-way and easements to minimize the project’s impact on farmers and other landowners.”

Coming into 2017, Dominion appears to be listening. It has moved its route eastward to collocate with an existing power line.

Virginia residents still remain vigilant. They are urging Governor Terry McAuliffe to require the project to use Virginia courts for any eminent domain proceedings.

The Atlantic Coast Pipeline would surely create some local jobs in the state. And it remains the most efficient means of delivering reliable energy.

Let’s hope it can move forward without pilfering local landowners. 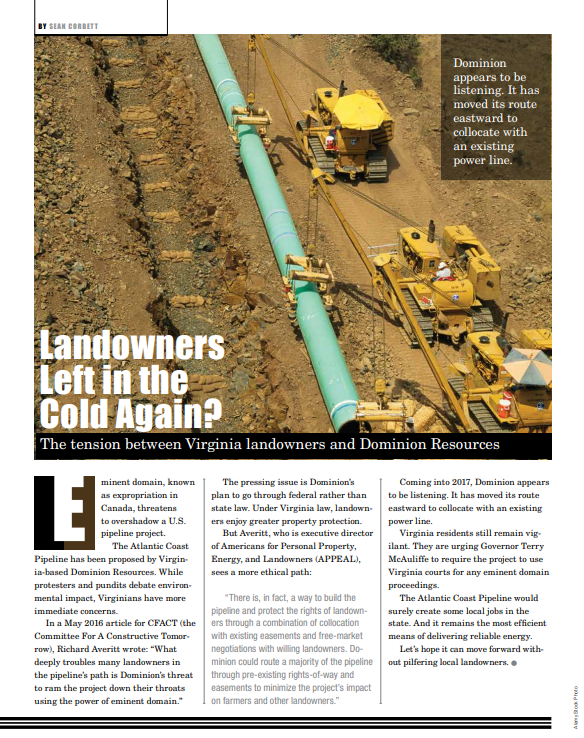